The Engineers faced off against the undefeated Ithaca Bombers on Saturday, October 30.

After winning the coin toss, Rensselaer chose to defer, meaning Ithaca would start out with possession in the first half. The Bombers quickly earned a first down on their first two plays. On that down, quarterback A.J. Wingfield dropped back in the pocket to pass. RPI lineman Magnus Wamble (Gr) was getting around on his blocker and closed in on Wingfield, forcing a throw. Engineer Conner Noyes ’23 read the play and ripped the ball from the receiver’s hands as it was caught for an early interception, giving RPI possession at the Bomber 46.

On the drive, the Engineers steadily made progress until reaching fourth and 4 at the 29-yard line. Three receivers lined up on the left before the snap, one of whom was Vinnie McDonald (Gr), whose route took him to a massive gap in the secondary. Quarterback George Marinopoulos (Gr) threw a dime to an open McDonald for the first score of the contest, giving RPI a 7‒0 lead with 10:43 remaining in the quarter.

Ithaca was desperately trying to gain momentum. On fourth and 7 at the Engineer 37, Wingfield threw a pass that went through the hands of Noyes, almost his second interception of the first quarter. The incompletion turned possession over on downs. The following two drives were unsuccessful and the quarter ended with the Engineers facing third and 1 at their own 31.

The Engineers were stopped on the first play of the second quarter, forcing them to punt. The Bombers gained possession at their own 33 and marched downfield, but were ultimately stopped by the Engineers' great defense, including an athletic swat by Spencer Brockdorff ’23 that forced an incompletion. On the Engineers’ next drive, Marinopoulos collapsed from a left knee injury. He was replaced by Matt Petercuskie ’23 for the rest of the game. Possession was regained by Ithaca, but neither team was able to get anything done on offense for the rest of the half. Going into the locker room, RPI led 7‒0, the only time this season Ithaca has gone scoreless in the first half.

The Engineers received the kick to start the second half, but were unsuccessful on their first drive. The Bombers ensuing drive was long due to the solid Engineer defense; the 14-play drive lasted over six minutes. On fourth and 5 at the RPI 28, Ithaca sent out kicker Nicho Bahamonde, who had been making 55-yard field goals during halftime. Bahamonde’s 40-yard attempt was curling to the left but still flew through the uprights for three points, ending the Bombers’ scoring drought with 6:28 left in the quarter. The Engineers went three-and-out on the following drive. The defense from both teams stood firm and the third quarter ended 7‒3.

The Engineers appeared to have a promising drive when they faced first and 15 at their own 43. Petercuskie threw a deep pass downfield intended for receiver Sterling Walker-Sutton ’23 heading towards the right sideline. Walker-Sutton miraculously made the catch and kept both feet in bounds for a gain of 30 yards, bringing RPI deep into Bomber territory. The Engineers lost yardage on the next play and faced second and 14 at the Ithaca 31. Petercuskie got the snap and dropped back into the pocket, surveying his options. He noticed receiver Riley Conboy (Gr) streaking downfield and lobbed a pass to the end zone. Conboy made a basket catch and held onto it while he was tackled to put the Engineers up 14‒3 with 9:16 left to play.

After a couple drives, the Bombers regained possession with 6:05 remaining. Ithaca was desperate to get back into the game. On second and 10, Wingfield rolled out to his right after feeling the pressure from the RPI defensive line. He threw a bomb downfield and, despite being covered by two Engineers, receiver Billy Tedeschi hauled it in for a gain of 40 yards, bringing his team into the red zone. After an eight-yard rush on first down, the Bombers threw a quick completion to running back Donte Garcia, who ran it into the end zone for the score. With so little time left and five points to go, the Bombers opted to go for a two-point conversion. Despite an incomplete pass on the following play, a targeting penalty on RPI gave the Bombers another chance. This time, Garcia ran it into the end zone for an additional two points. The Engineers lead was brought to only three points.

The Engineers were shut down on their next drive, giving the ball back to the Bombers with 2:21 left on the clock—plenty of time to score. Ithaca marched upfield with purpose, steadily advancing and running off as much clock as possible to prevent an RPI comeback if they scored. They ultimately faced fourth and 3 at the Engineer 18. Ithaca took a timeout to stop the clock with 34.1 seconds remaining and also to plan their attack. The Bombers came out looking to go for it, causing RPI to take a timeout as well. The offense came out again looking to go for it but, due to a dwindling play clock and the RPI defense not jumping offside, the Bombers took their final timeout. Bahamonde walked out onto the field as the Bombers went for a more conservative approach, taking their chances in overtime if they tied it up with a made field goal. The Engineers allowed Bahamonde to set up. RPI then iced him with a timeout, allowing his nerves to set it. With Ithaca out of timeouts, there would be no more delay.

The holder took the snap and set it down for Bahamonde. Engineer Carlos Davis ’23 ran around the left edge of the blockers and dove to try to block the kick. Bahamonde’s leg swung through the ball and sent the ball on its course. Rotating end over end, the ball hooked to the left of the goalposts in a moment of excruciating heartbreak for the Bombers, but pure elation for those in attendance. The Engineers on the sidelines were celebrating and the crowd in the stands erupted.

The turnover on downs meant the Engineers had to run one last play. Petercuskie took a knee to run down the clock for the win. The 14‒11 victory brought the Engineers’ season record to 7‒1 and 3‒1 in the Liberty League. RPI, Union, and Ithaca are possible contenders for the title of Liberty League champion. The title may ultimately be decided at the Dutchmen Shoes rivalry game between the Engineers and Dutchmen. 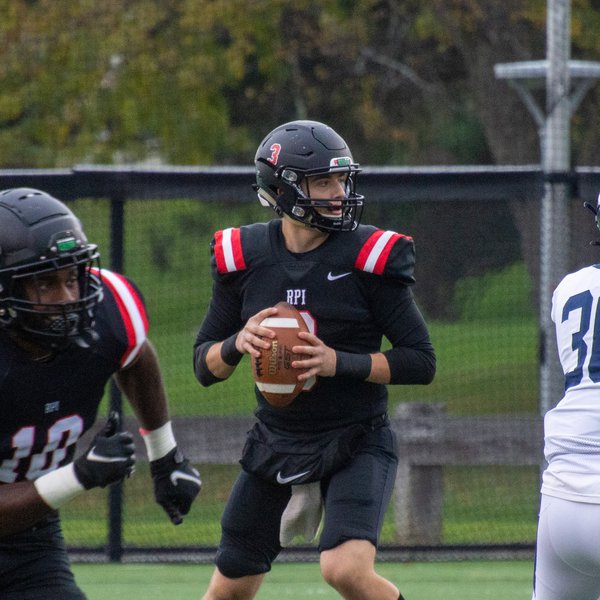 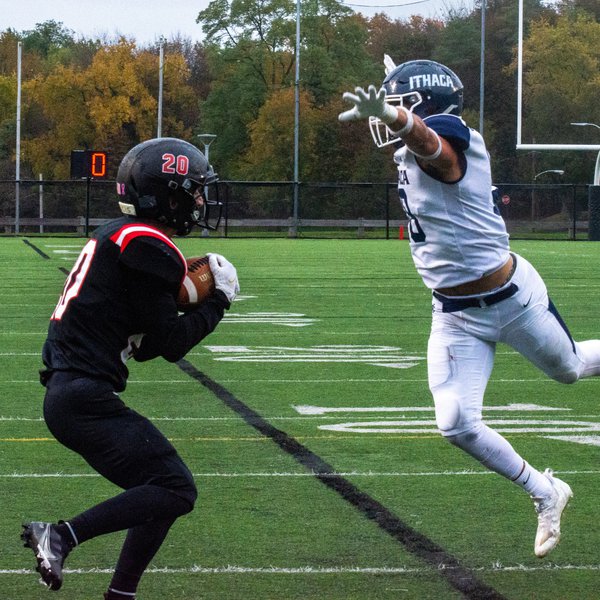