It was a stormy day in Schenectady as the Engineers and Dutchmen battled it out on the gridiron at Frank Bailey Field; the weather didn’t keep fans from filling up the stands and wrapping around the stadium fence. 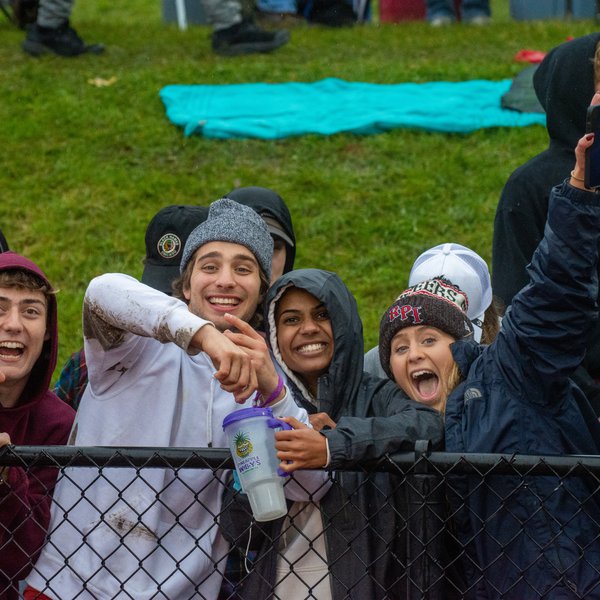 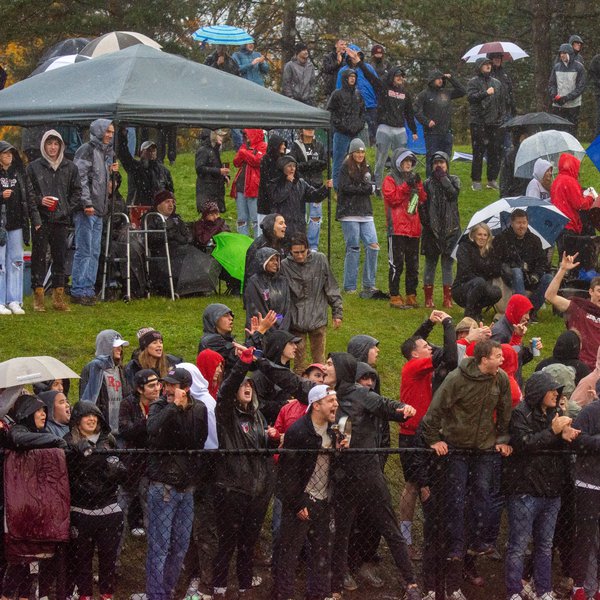 The Engineers received the kickoff; however, they went three-and-out on the first possession of the game. Punter Zac Montrief (Gr) sent the ball 37 yards and Union took over at their own 45-yard line. Due to the wet conditions, the ball slipped out of quarterback William Bellamy’s hand on his first pass attempt, leading to a fumble that he ended up recovering. Even on the next play, the slippery ball forced a scuffed handoff from Bellamy to running back Ike Irabor, resulting in another fumble that the Dutchman again recovered. Union, too, went three-and-out on their first possession.

Running back Delano Munoz Whatts (Gr) led the charge for RPI on the following drive, bringing them deep into Dutchman territory. The Engineers ultimately failed on a fourth-down conversion, turning over possession on downs. Union relied heavily on the rush and quickly marched upfield. Their progression came to a halt when the Engineer defense stopped them in the red zone, forcing the Dutchmen to settle for a field goal on fourth and 10. Union took a 3‒0 lead just before the end of the quarter. 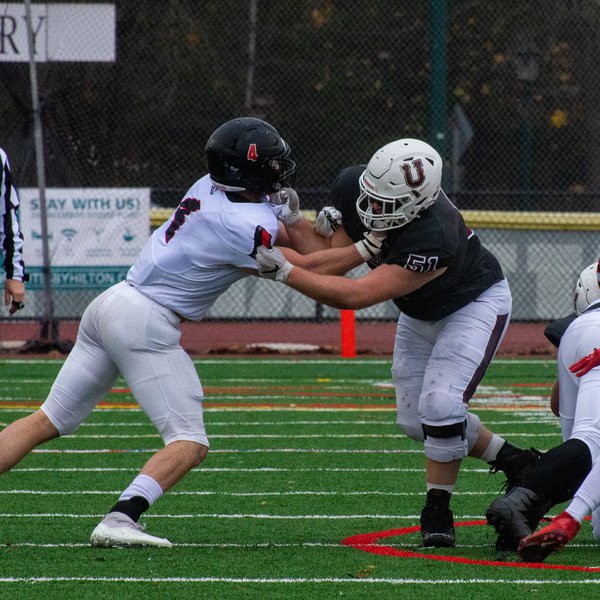 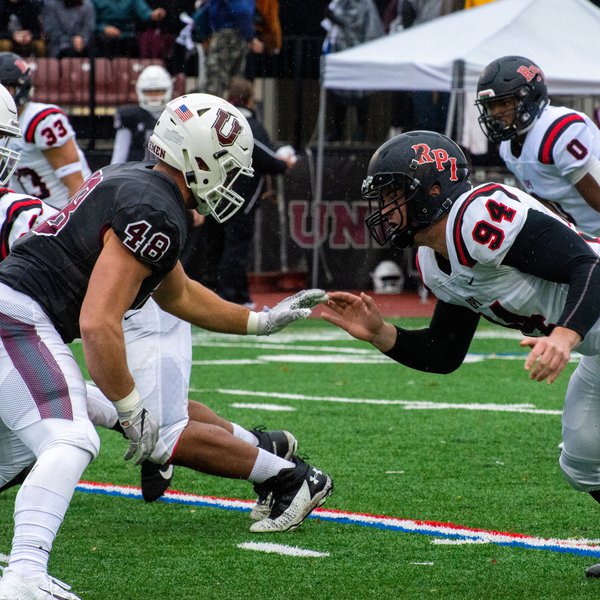 The Engineers’ next drive continued into the second quarter but they would be forced to punt once again. Both teams went back and forth with scoreless possessions until the Dutchmen recovered a fumble by Munoz Whatts at the Engineer 43 with 5:00 left in the half. On the drive, Union kept it on the ground for every play, strong-arming their way through the defense. The Dutchmen advanced until they were just two yards from the goal line. On second down, Irabor took the snap alone in the backfield and ran into the end zone for the first touchdown of the game. Union’s lead was now 10‒0 with less than two minutes to play in the first half.

With the clock winding down, RPI wanted to put points on the board before heading into the locker room at halftime. Barely in their own half with just 14 seconds remaining, time was not on their side. Receiver Peter Lombardi ’22 made an 18-yard reception and ran out of bounds to stop the clock with six seconds remaining. Now at the Union 35, quarterback George Marinopoulos (Gr) had to throw a deep pass for a chance to score. Marinopoulos took the snap and immediately felt the pressure from the Dutchmen, rolling out to his right and barely managing to get the pass off as he was brought down. The pass was just short of the end zone, but receiver Sterling Walker-Sutton ’23 made the catch and used his speed to beat the Dutchmen defense and stroll into the end zone for the score. The touchdown brought the Engineers back into the game as they only trailed 10‒7 heading into halftime. 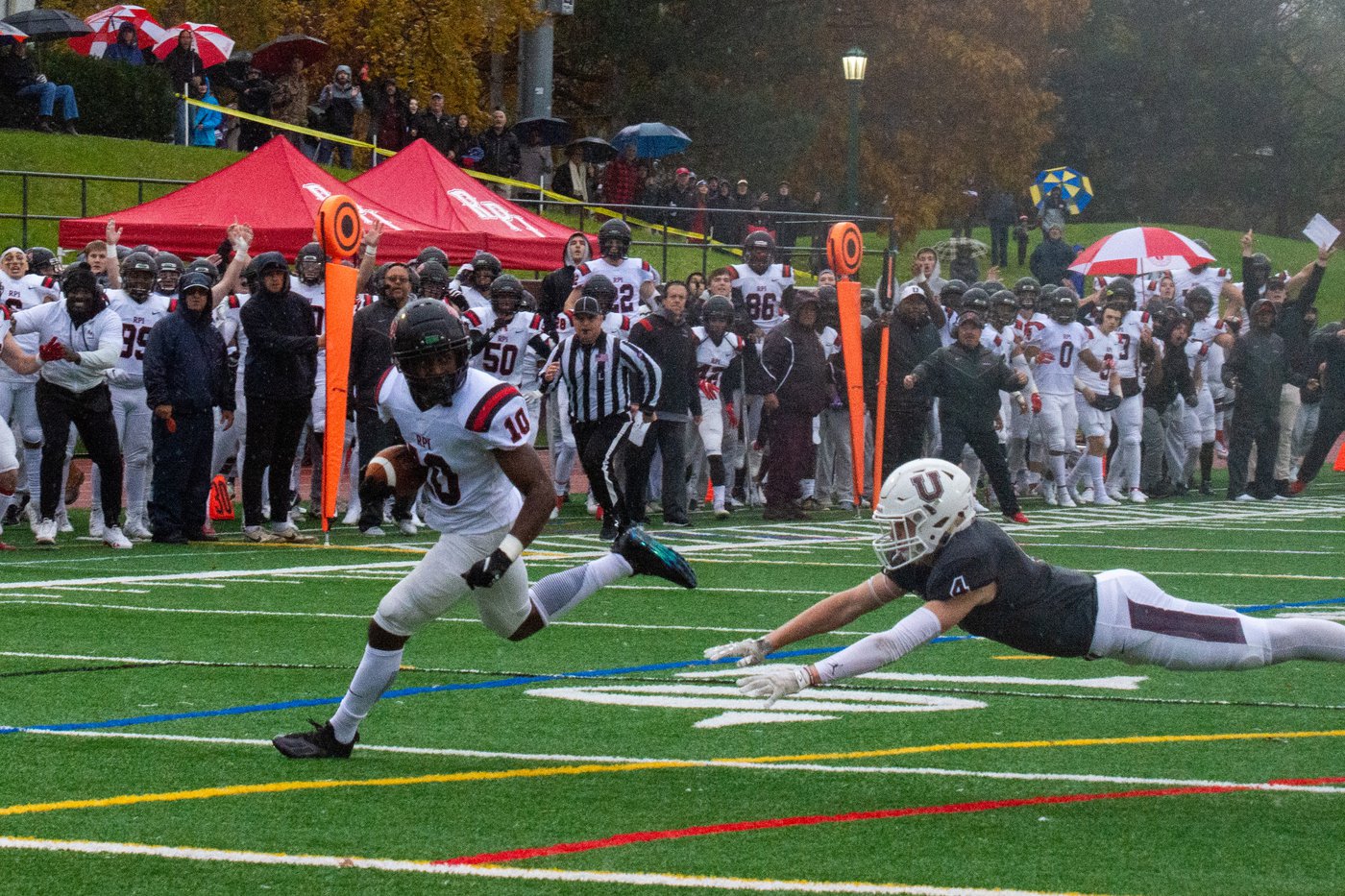 Both teams struggled coming out of the break. Punts and failed fourth-down conversions were the stories of the third quarter, but as time went on, Union started to heat up. With a little over four minutes remaining in the quarter, the Dutchmen started the last drive of the quarter at the RPI 48. Union progressed upfield with 18 rushing yards and 26 passing yards, earning them a first down four yards from the end zone. Union continued the drive into the fourth quarter. On the first play of the final quarter, backup quarterback Donovan Pacatte took the snap and rushed it into the end zone to put the Dutchmen up 17‒7.

A 24-yard kickoff return from Walker-Sutton gave RPI a great field position to start their drive. The Engineers’ passing game was starting to gain momentum. Two receptions to Lombardi and one to Walker-Sutton eventually brought the Engineers within ten yards of the Dutchman end zone. Despite the shift in momentum, Union stopped the Engineers on third down and, playing it safe, the Engineers kicked a field goal to inch the score closer at 17‒10.

Union took over with 9:24 left to play. The Engineers' defense fed off of the pressure put on their shoulders. They kept the Dutchmen from wasting too much of the clock, allowing the Engineers to get possession back with plenty of time to tie up the score. The Engineers’ most dangerous opponent was the clock. If they were to score too quickly, that would give Union another opportunity to score. If they took too long, the clock would run out before they’d reach the end zone. As a result, the Engineers went with a mix of rushing to keep the clock running alongside passing to gain yardage quickly.

The Engineers were gaining yardage, but it did not seem fast enough. They faced fourth and 6 at the Union 19 with 1:07 remaining—obviously a field goal would not suffice. Marinopoulos took the snap and threw a quick pass to Munoz Whatts to his right. When Munoz Whatts made the catch, he had about ten yards to get the first down. He fought for every inch and barely earned the Engineers a first down to keep their hopes alive. On the next play, Marinopoulos threw a pass to the back left corner of the end zone to find Vinnie McDonald (Gr), but an ineligible receiver penalty cut the celebrations early. On second and 11 at the Union 13, Marinopoulos threw a dart to McDonald. He hauled it in and rushed over to the fan section to celebrate. The touchdown brought the score to 17‒16. 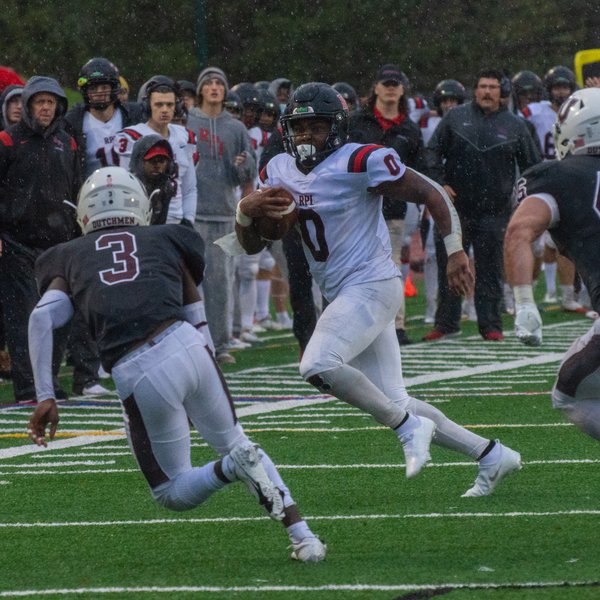 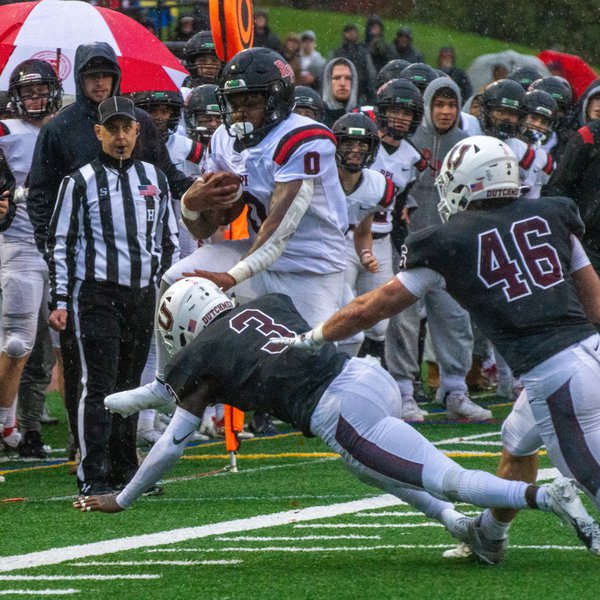 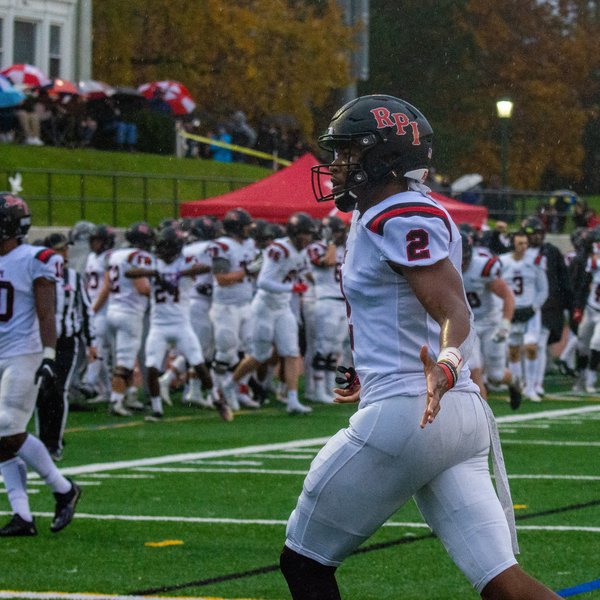 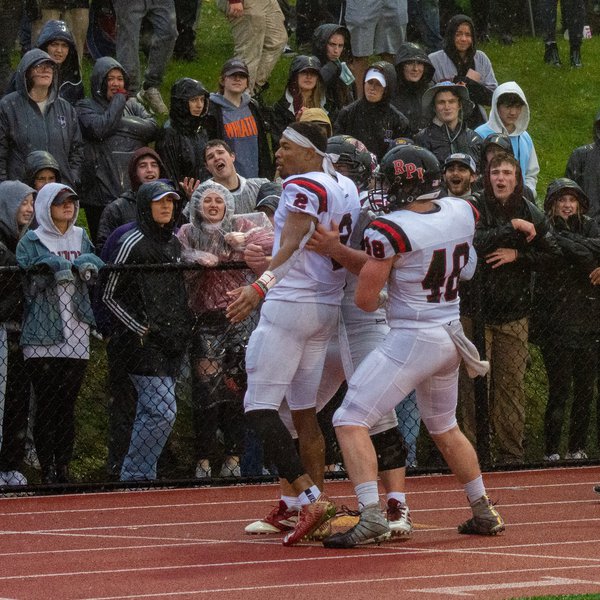 Interestingly, RPI Head Coach Ralph Isernia decided to go for the win rather than take their chances in overtime. The Engineers would go for the two-point conversion. Marinopoulos tried to find Lombardi in the end zone. Incomplete. Utter heartbreak for RPI. With 29 seconds left on the clock, the game seemed out of reach.

In a final attempt to get the ball back, the Engineers had to go for an onside kick. RPI’s Diego Fernandez ’24 walked onto the field to try to force a mistake from the Dutchmen. Fernandez’s low kick bobbled as a Dutchman tried to corral on the ball. It came loose and a heap of bodies dove to recover it. When the pile disbanded, the referees signaled that Engineer Jimmy Leblo ’23 had recovered the ball. RPI was given another chance. 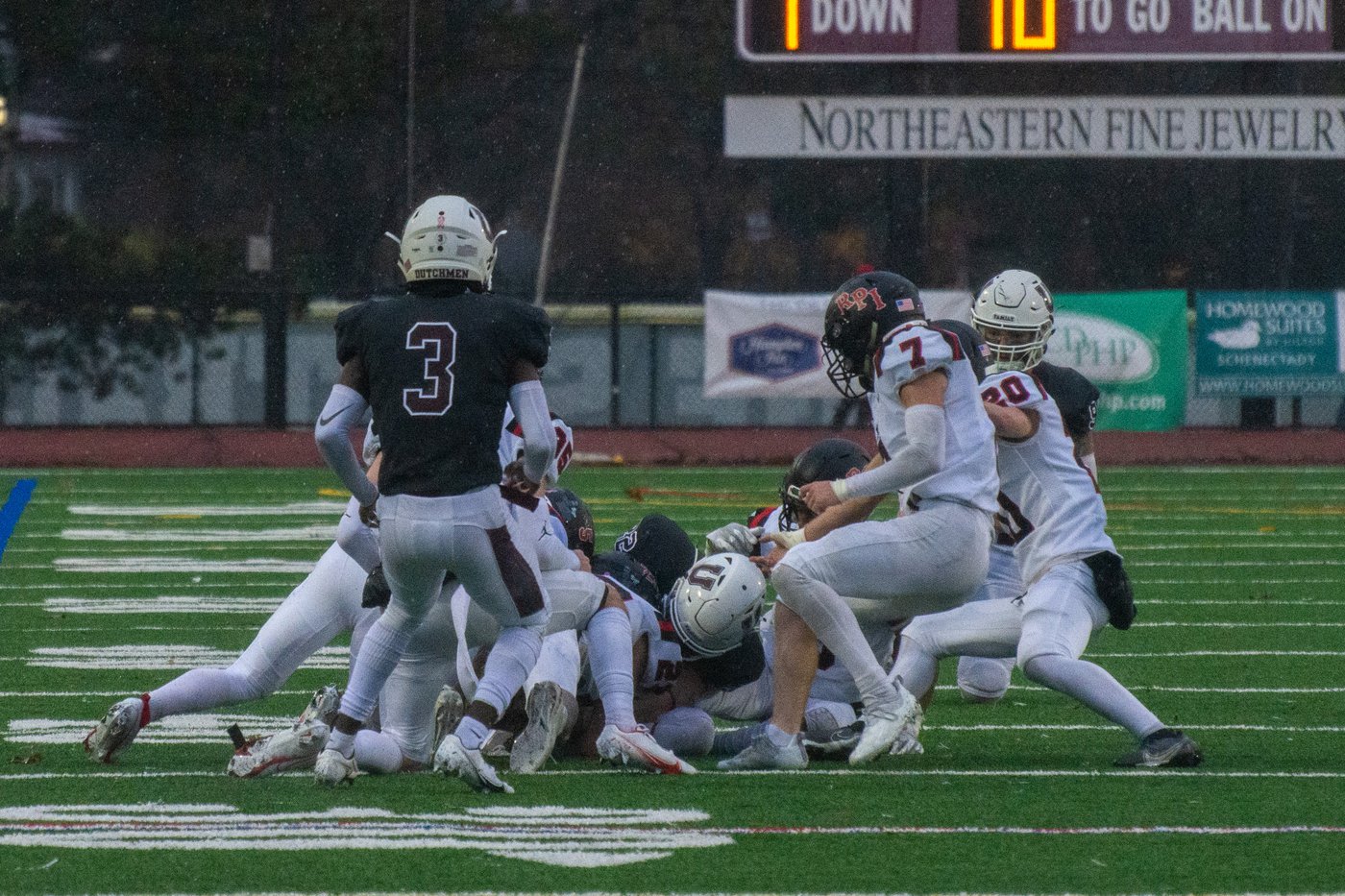 Two completions to Walker-Sutton advanced the Engineers to the Union 20. With the clock still running, Marinopoulos spiked the ball as the clock read 0:04. The Engineers took a timeout and brought out the field goal team.

During the season, the Engineers’ kicker Conor MacDougall ’22 sustained an injury that left him out of the game, leaving the Engineers to scour for another kicker. Luckily for them, a captain of the RPI men’s soccer team, Trevor Bisson, used to be a kicker for his high school football team in Louisiana. Since his season with the soccer team was over, he was free to fill in for MacDougall.

Onto the field stepped defender-turned-kicker Bisson out to take the potentially game-winning field goal. The Engineers set up for the 36-yard attempt. The snap came. The ball was placed. Bisson swung through it. The ball sailed straight for those 36 yards and through the uprights.

In an unlikely finish, the Engineers scored nine points in the final minute to win 19‒17. Not only had they won the Dutchman Shoes trophy, but the Liberty League title as well. The Engineers advance to the first round of the NCAA tournament, their first opponents being the Endicott College Gulls.

Click here to watch the broadcast of the game and here for the box score. 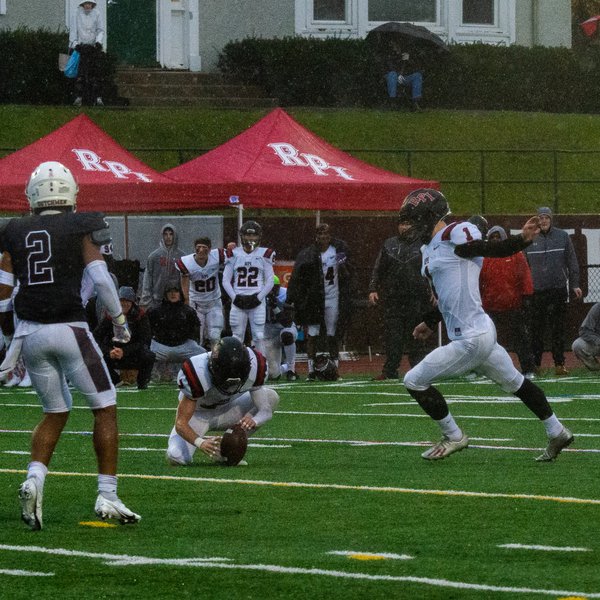 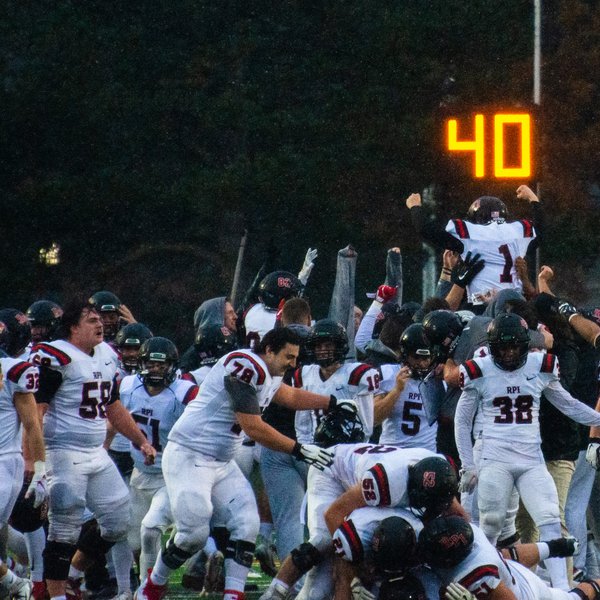 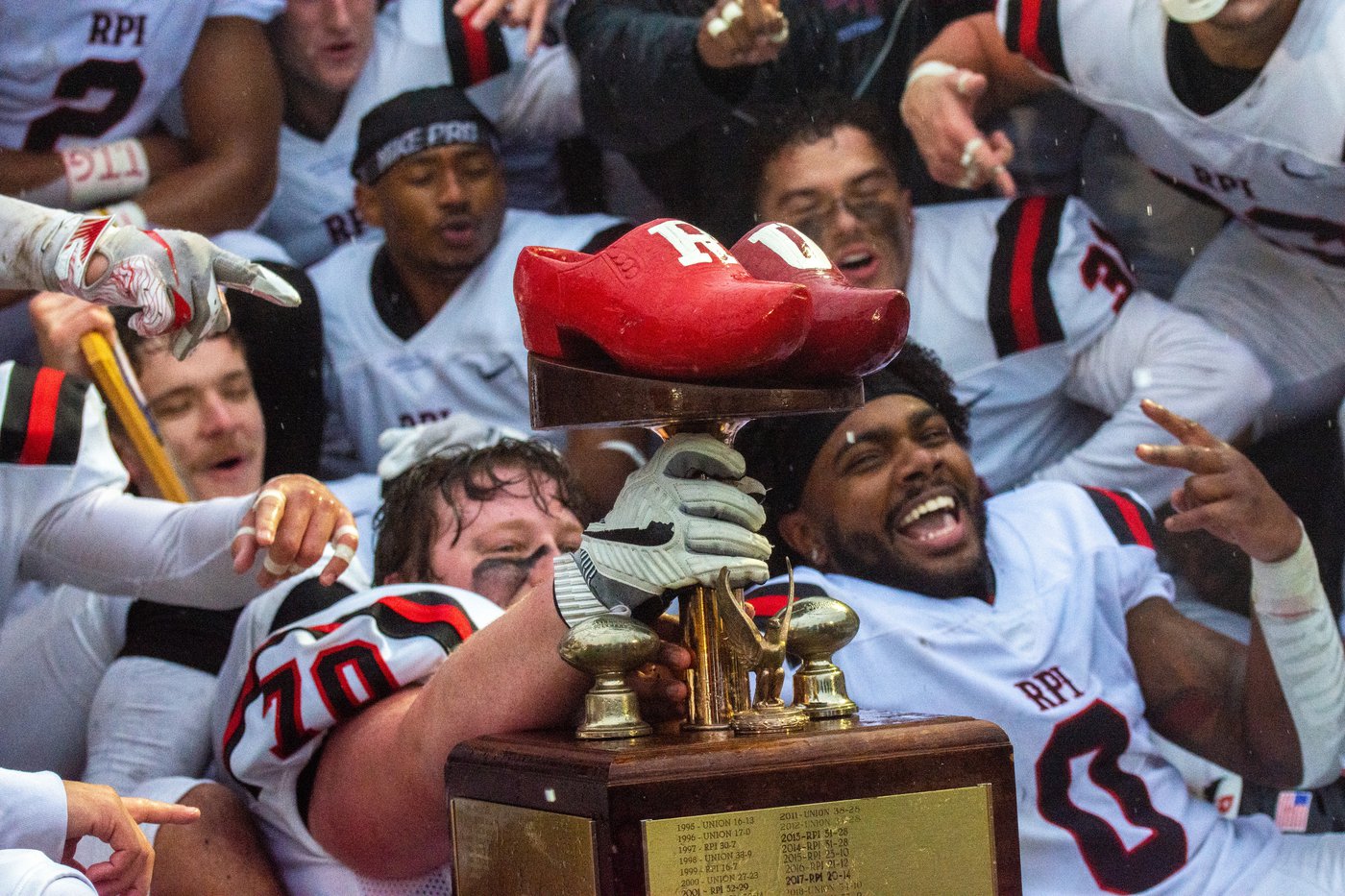