The Engineers began Liberty League play with a 38‒22 triumph over the University of Rochester, continuing their undefeated season. Rensselaer now stands at 5‒0.

The Yellowjackets received the opening kickoff but went three-and-out on their first drive. On second and 8 at the RPI 43, wide receiver D.J. Palmer ’22 faked an inside cut to create separation from his marker. Quarterback George Marinopoulos (GR) threw a precise pass for a 22 yard completion. The Engineers continued their momentum, eventually reaching fourth and 1 at the Rochester 12. Palmer took advantage of the secondary’s zone coverage and found plenty of space in the endzone to make a comfortable catch, putting RPI up 7‒0 with 9:15 left to play in the quarter.

Neither team was able to get anything done on their successive drives. The quarter ended 7‒0 with the Yellowjackets having possession at the RPI 48.

On the first play of the second quarter, Rochester quarterback Sean Casey took the snap and rolled out to his left. Casey made a throw on the run and, despite the tight coverage of defensive back Carlos Davis ’23, wide receiver Liam McManus was able to hold onto it and was down at the five-yard line. On second down, Casey faked the handoff to running back Will Varney and took off to the left. The Engineer defense reacted late and were closing down on Casey, but, just before they could reach him, he dove into the pylon for the score. After a minute of play in the quarter, the Yellowjackets tied it up 7‒7.

The Engineers came back with momentum. On the second play of the drive, running back Delano Munoz Whatts (GR) maneuvered through the blockers for a gain of 22 yards. The Engineers ended up in a third and 7 situation, but an 11-yard rush from Munoz Whatts moved the chains. The Engineers were not able to find the end zone on their drive, but a 22-yard field goal from Conor MacDougall ’22 sailed through the uprights to make the score 10‒7 with 7:00 left in the half.

The Engineers stopped the Yellowjackets on the next drive, getting possession back with 4:44 left. On the first play, Marinopoulos gave the handoff to running back Dylan Burnett ’22. Defensive back Jack Yensel stripped the ball from Burnett’s grasp and the fumble was recovered by Rochester linebacker Braydon Bush at the RPI 14. Casey made a completion to bring the Yellowjackets to the one-yard line. Varney plowed through the crowd to give Rochester a 14‒10 lead with 3:54 left in the half.

On third and 10 at the 50, Marinopoulos stepped up in the pocket and threw a dart to wide receiver Sterling Walker-Sutton ’23. Walker-Sutton made the catch in stride, juked a tackler, and continued running until being brought down at the ten-yard line. On the next play, Marinopoulos lobbed a pass into the back corner of the end zone. Wide receiver Vinnie McDonald (GR) made the catch and impressively got both feet down for the touchdown. The Engineers went into the break 17‒14. 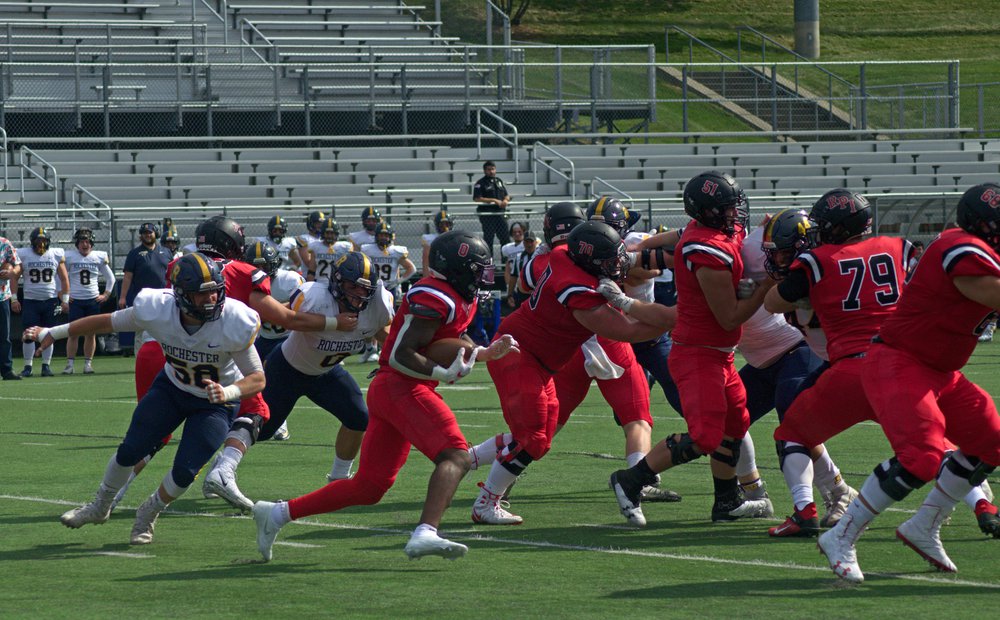 The Engineers began the second half with possession. On first and 20, Marinopoulos drilled a pass to Palmer for a gain of 26 yards, crossing the Engineers into enemy territory. On the next play, the Engineers opted for a screen to slot receiver Peter Lombardi ’22 on the right. Solid blocking opened up a lane for him, ultimately making it to the 15 before being tackled. After two relatively unsuccessful plays, the Engineers faced third and 8. Palmer created enough distance from his marker to make an uncontested reception in the end zone for his second receiving touchdown of the game. RPI was up 24‒14 with 11:12 left in the quarter.

A firm RPI defense shut down the Yellowjackets once again, forcing them to go three-and-out. The Engineer offense consistently gained first downs, making it to the Rochester 22. On third and 5, rushers were putting pressure on Marinopoulos. He had to get the ball out of his hands quickly and noticed wide receiver Deen Ninche ’23, unmarked, running to the end zone. Marinopolous’ pass was perfectly placed, despite the pressure, and the Engineers’ lead was increased to 31‒14 with 5:49 left in the third quarter.

Once again, the dominant Engineer defense finished Rochester’s drive quickly. The Engineer offense went three-and-out on the subsequent drive. The punt from Zac Montrief (GR) landed at the RPI 47, but, unfortunately for Rochester, immediately struck the leg of a Yellowjacket and was recovered by the Engineers. The quarter finished 31‒14 and the Engineer possession continued into the final quarter.

On second and 7 at the Yellowjacket 19, Marinopolous threw a lateral to McDonald. The trick play was enough of a distraction for Lombardi to find enough space in the end zone. All Rochester could do was watch as McDonald threw the ball to Lombardi for another touchdown, increasing the score to 38‒14 with 14:29 left to play.

The RPI defense continued their stellar performance as another drive was finished. Unlike their counterparts, the Engineer offense began to grind to a halt. There were a few good plays, but overall nothing special as the Engineers were forced to punt. Montrief’s punt bounced and was headed for the end zone, but Davis managed to stylishly keep the ball from landing there, downing the ball inches from the goal line.

The Yellowjackets were unfazed by their terrible field position, driving upfield with momentum. The Engineer defense bent but didn’t break, managing to force a turnover on downs at their own five-yard line. The offense came back out, attempting to run down the remaining three minutes. Receiver Dillon Smith ’22 was given the handoff and attempted to run up the middle. Defensive lineman Yianni Koutsofavas managed to knock the ball loose and Rochester recovered the fumble at the Engineer 30.

The Yellowjackets took advantage of the careless turnover, quickly gaining yardage with a pass. They were close enough to the goal line that a powerful rush pushed through the line and into the end zone. Rather than kicking the extra point, Rochester went for a two-point conversion. The play was good and the score became 38‒22 with 1:34 remaining. The Yellowjackets went for an onside kick, but were not able to get the ball back. The Engineers ran down the clock.

The victory brings the Engineers’ record to 5‒0, preserving their undefeated season. They seek to continue it at home against Liberty League opponents Buffalo State on October 9. 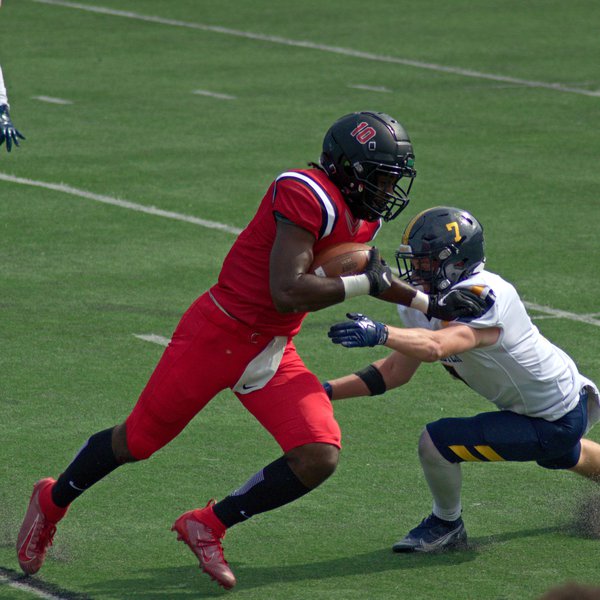 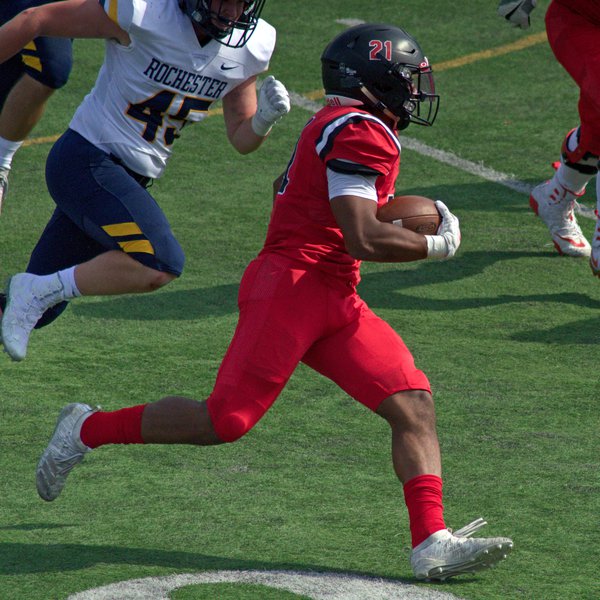 Editor's Note: The third paragraph of the article incorrectly stated that "the half ended" and has been corrected to state that the quarter ended, not the half. 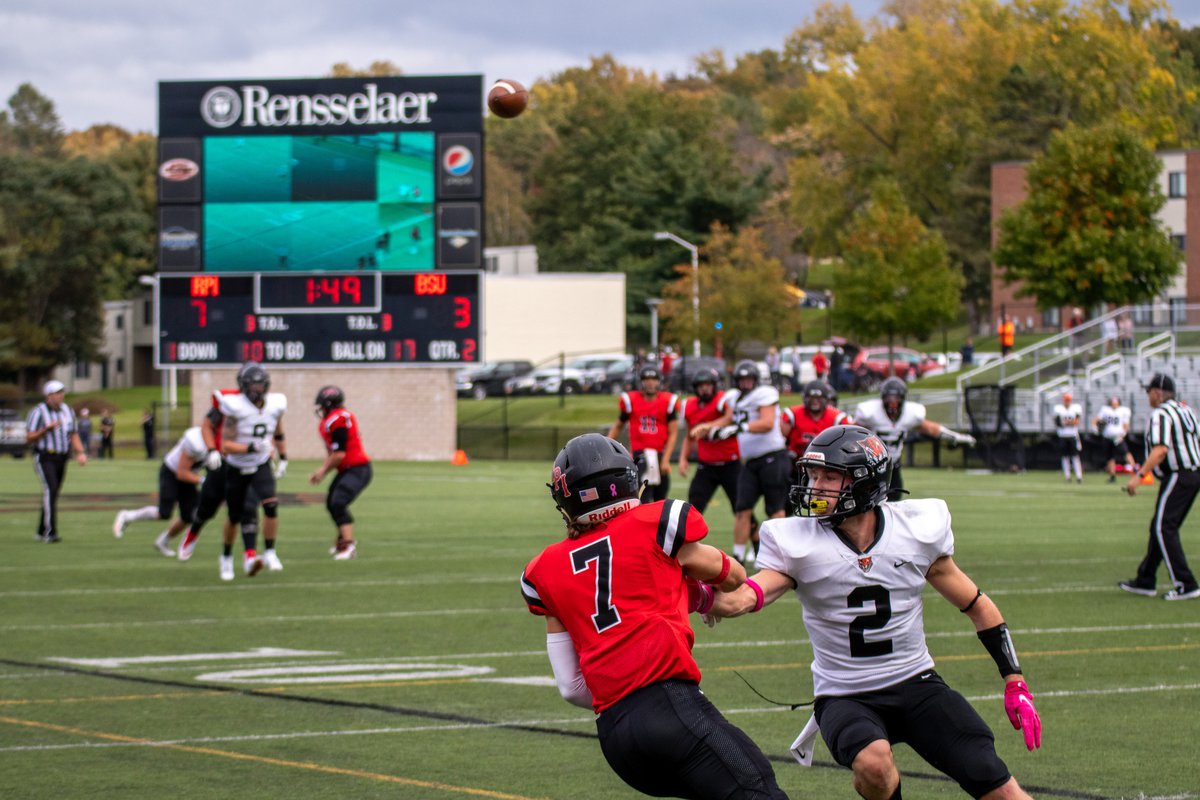