After Dartmouth seemingly scored a dagger with five seconds left in the second period, the Engineers resiliently rallied back with a four-goal third period to win 5‒3 in the third match of the best-of-three series, to advance to the second round of the ECAC playoffs. In the victory, Simon Kjellberg ’23 recorded two goals and an assist on the game-winning goal from Ryan Mahshie ’23. The Engineers will travel to Cambridge next weekend to take on the Harvard Crimson.

After splitting the first two games of the series, RPI and Dartmouth faced off in Game 3 with the potential for elimination. The Engineers forced Dartmouth goaltender Clay Stevenson to work early on. After just a minute of play, Stevenson had to save a shot from Kjellberg. Shane Sellar (Gr) quickly sent the rebound back to Justin Addamo (Gr) in the slot. Stevenson twisted his body to save Addamo’s shot with his left leg, then clamped his glove down to freeze the puck.

RPI sustained heavy offensive pressure for the first half of the period, but the Big Green grabbed the early lead. Dartmouth’s Joey Musa took a low, soft shot from the top of the left faceoff circle, causing goaltender Jack Watson ’25 to drop down into the butterfly. Before the puck reached Watson, Musa’s teammate Matt Hubbarde intercepted it and took it onto his backhand. Watson stretched out to cover his post, but Hubbarde reached out his stick and tucked a shot behind Watson to put the Big Green up 1‒0 after 12 minutes. Dartmouth continued to look dangerous, ringing a shot off the post with a minute left in the period. The first frame wrapped up without another goal.

The Big Green went on the power play early in the second period, but Watson made five saves to prevent Dartmouth from doubling their lead, including a spread-eagle save on a rebound. The Engineers nearly tied it up five minutes into the second period when Ottoville Leppänen ’22 received the puck with his back to goal. Knowing the exact location of his teammate Ture Linden ’22, Leppänen spun around his defenseman and swept the puck over to him as he was falling, but Linden was unable to put a shot on goal. Dartmouth extended their lead minutes later. Ian Pierce ripped a slap shot from the point which Watson saved with his pad. Ryan Sorkin rushed in, picked up the rebound, and slipped it around Watson, putting them ahead by two goals. 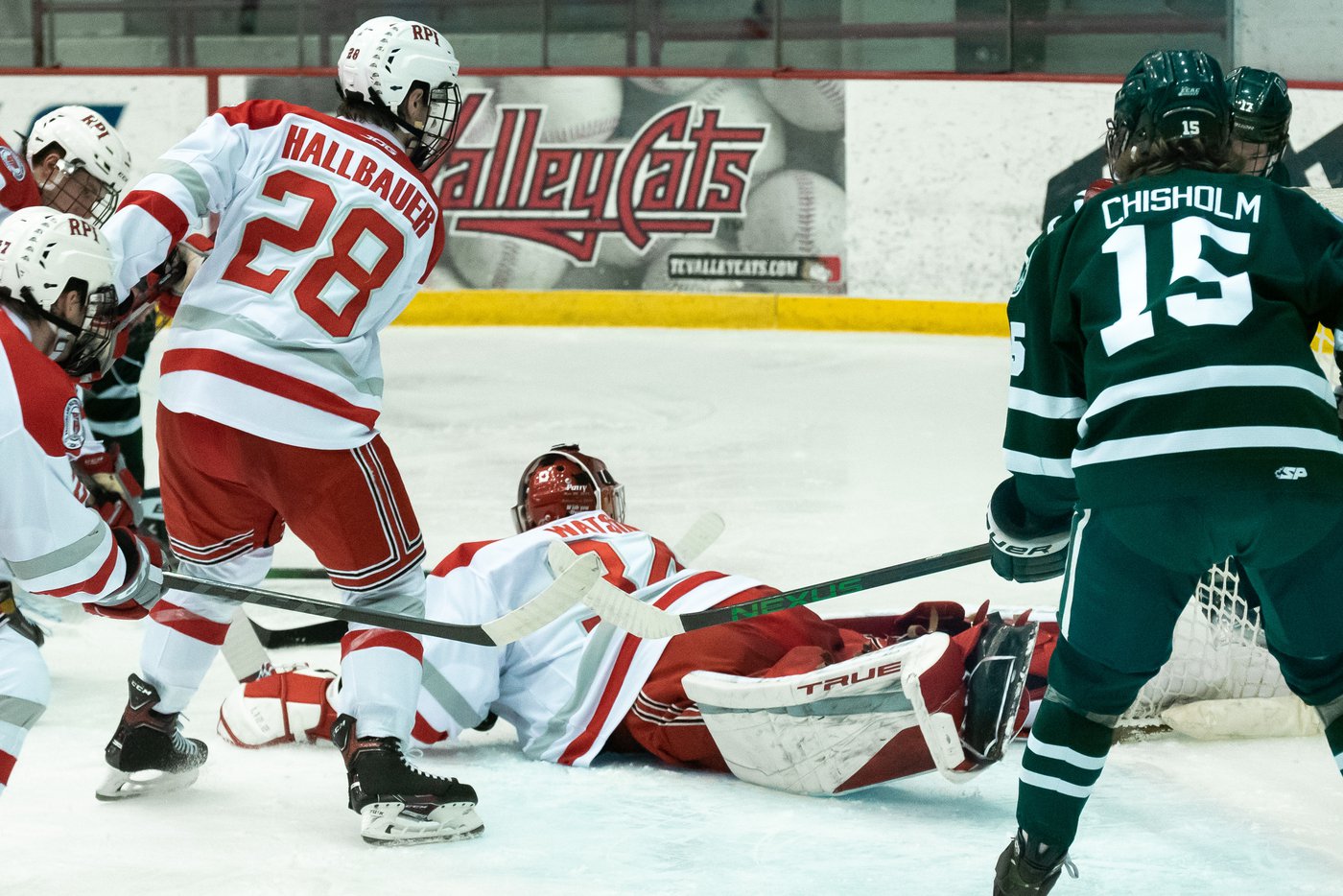 Exactly three minutes later, Kjellberg brought the Engineers back into the game on a power play. The Big Green held off RPI for most of the penalty, but a pass from Zach Dubinsky ’23 opened Kjellberg up for a shot. As Coach Dave Smith called him in the post-game interview, the “big man Addamo” positioned himself in front of Stevenson for the screen. Kjellberg took a wrist shot that sailed through four players and into the back of the net to bring the score to 2‒1.

The Big Green went on the power play again in the last 50 seconds of the period. Matt Chisholm skated into the Engineer zone and was decked as he was trying to pass to his left. The puck fell to Braiden Dorfman, who slipped the puck through the defense with a toe drag. At the end of the feint, Dorfman went top shelf on Watson with five seconds left in the period to extend Dartmouth’s lead to two heading into the second intermission.

During the break, the crowd in the Houston Field House was silent. Completely demoralized, fans waited for the teams to retake the ice. The RPI locker room was the opposite. Leaders, both new and veteran players, hyped up the team to keep their season from ending. With their backs against the wall, the Engineers retook the ice with the desperate purpose of, at the very least, extending the game into overtime.

Jake Johnson ’22 obliterated a Dartmouth skater with a body check thirty seconds into the period, reigniting the crowd. The Engineers went back on the power play after almost five minutes had expired. The Big Green again nearly killed off the penalty, but Kjellberg scored his second goal with eight seconds left on the power play. With Addamo set up in front of Stevenson again, Kjellberg wound up for a slap shot from the point. He unleashed a supersonic shot that flashed past Stevenson before he could react for the Engineers’ second goal, the start of an unlikely comeback. 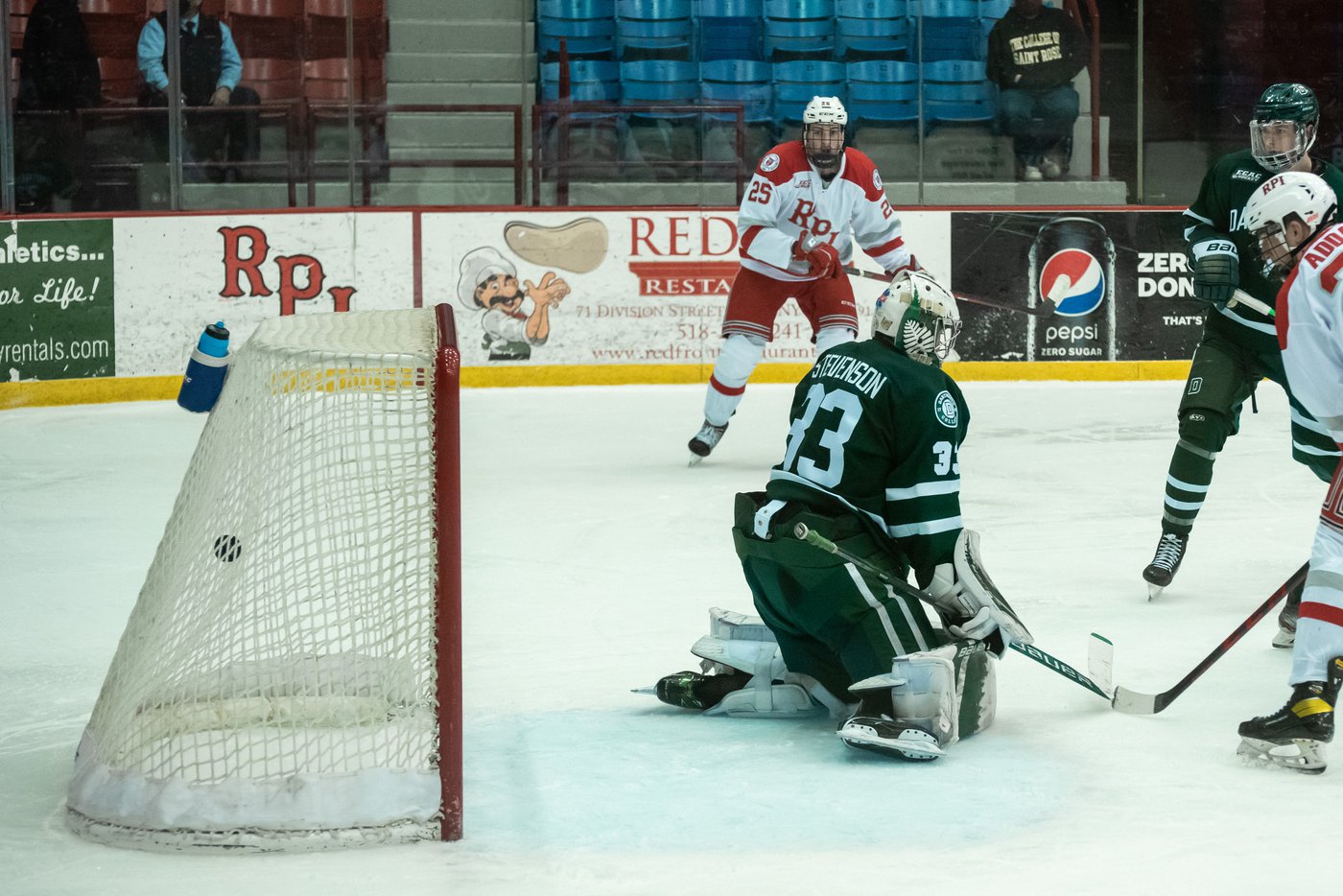 A SLAP SHOT FROM SIMON KJELLBERG '23 FLIES past Stevenson for his second goal. Andrew Days/The Polytechnic

The Engineers continued to build up their momentum. After drawing a bench minor penalty for having too many men on the ice, it was likely the Engineers’ charge would dissipate. Dubinsky intercepted a pass as the Big Green attempted to reenter the attacking zone, giving the Engineers a 2-on-2 chance. Jack Brackett ’24 cut across the zone to draw a defenseman away, freeing up space for Dubinsky to skate into. Dubinsky snuck a backhand shot five-hole on Stevenson for a short-handed equalizer, and the crowd erupted. The Engineers resurrected their playoff hopes.

With so much momentum in the period, RPI had too much inertia to be stopped. A slashing penalty with less than five minutes remaining gave the Engineers another power play. Kjellberg drove down the right boards and sent the puck to the low slot to a crashing Mahshie. Angling his skate, Mahshie redirected the puck to the far post, and it squeaked past Stevenson. The goaltender tried to squeeze the puck between his skate and the post, but the Engineers celebrated after seeing the puck cross the line. The Field House electrified as fans emitted an ecstatic roar. The Engineers dug themselves out of a hole at that point looking down on the Big Green. 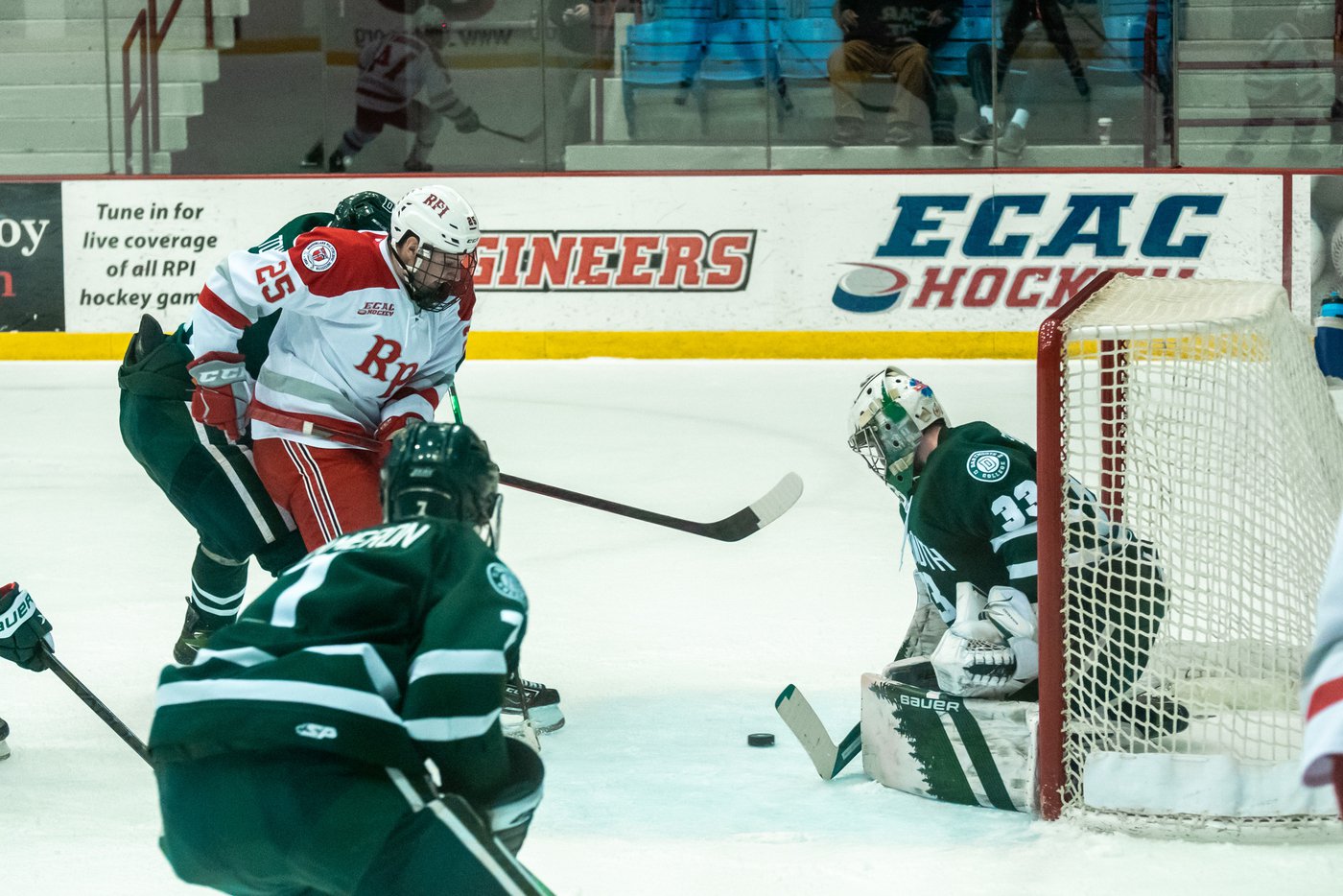 THE PUCK REDIRECTS off the skate of Ryan Mahshie '25 for the game-winning goal. Andrew Days/The Polytechnic

Dartmouth immediately pulled Stevenson to get an extra skater, but as the time on the clock diminished, so did Dartmouth’s determination. With two minutes left, Watson made a great reaction save and covered the puck. After the whistle, Sorkin poked at the puck through downed Engineer Jake Gagnon ’24, causing Gagnon to swipe at him with his stick. With frustration mounting, Sorkin dropped to the ice and drilled Gagnon with punches. Sorkin was sent to the penalty box for roughing.

To put the nail in the coffin, Linden launched a shot from the red zone into the empty net, putting the Engineers up 5‒3, capping off RPI’s four-goal period. The final buzzer ended the game, putting the Engineers through to the second round of the ECAC playoffs. RPI will play another best-of-three series next weekend against the Harvard Crimson to determine who will advance to the ECAC semifinal in Lake Placid. 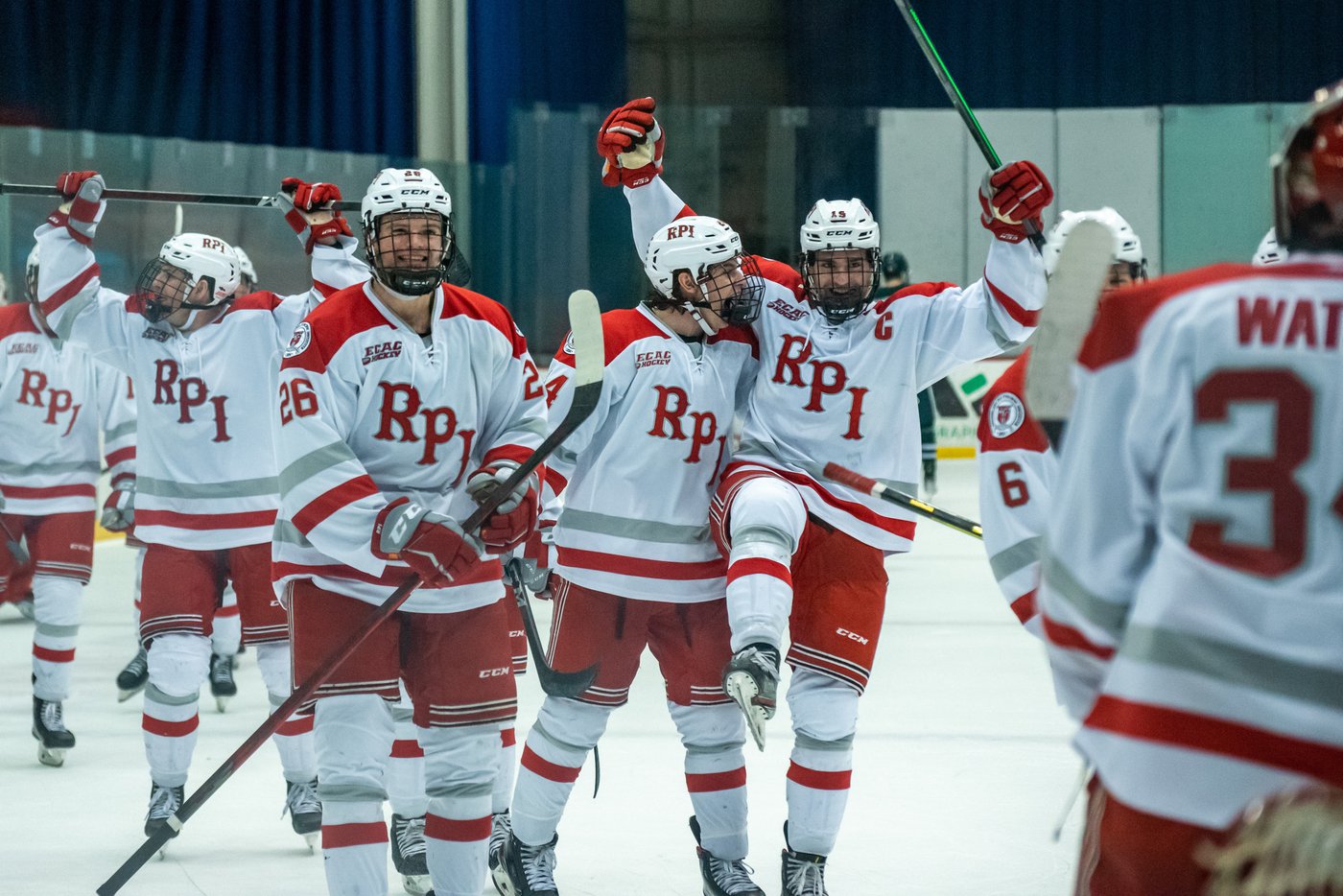