Mason Klee ’23 scored the game-winning goal in the Engineers’ 3‒2 victory over Dartmouth in the second of the best-of-three series, resulting in a Game 3. The two other scorers for the Engineers were Simon Kjellberg ’23 and Jakub Lacka ’22. Jack Watson ’25 made 21 saves. Game 3 will be played today at 4 pm.

Rensselaer has not had a good track record of first periods, but this game was an exception; the Engineers struck first after just eight minutes. In front of the net, Zach Dubinsky ’23 took a backhand shot that Dartmouth goaltender Clay Stevenson saved. Kjellberg pounced on the rebound, hitting the bouncing puck up into the air. The shot took Stevenson by surprise as it arced over his left shoulder. Unable to make a glove save, Stevenson watched the puck cross the goal line, putting the Engineers up for the first time in the series. 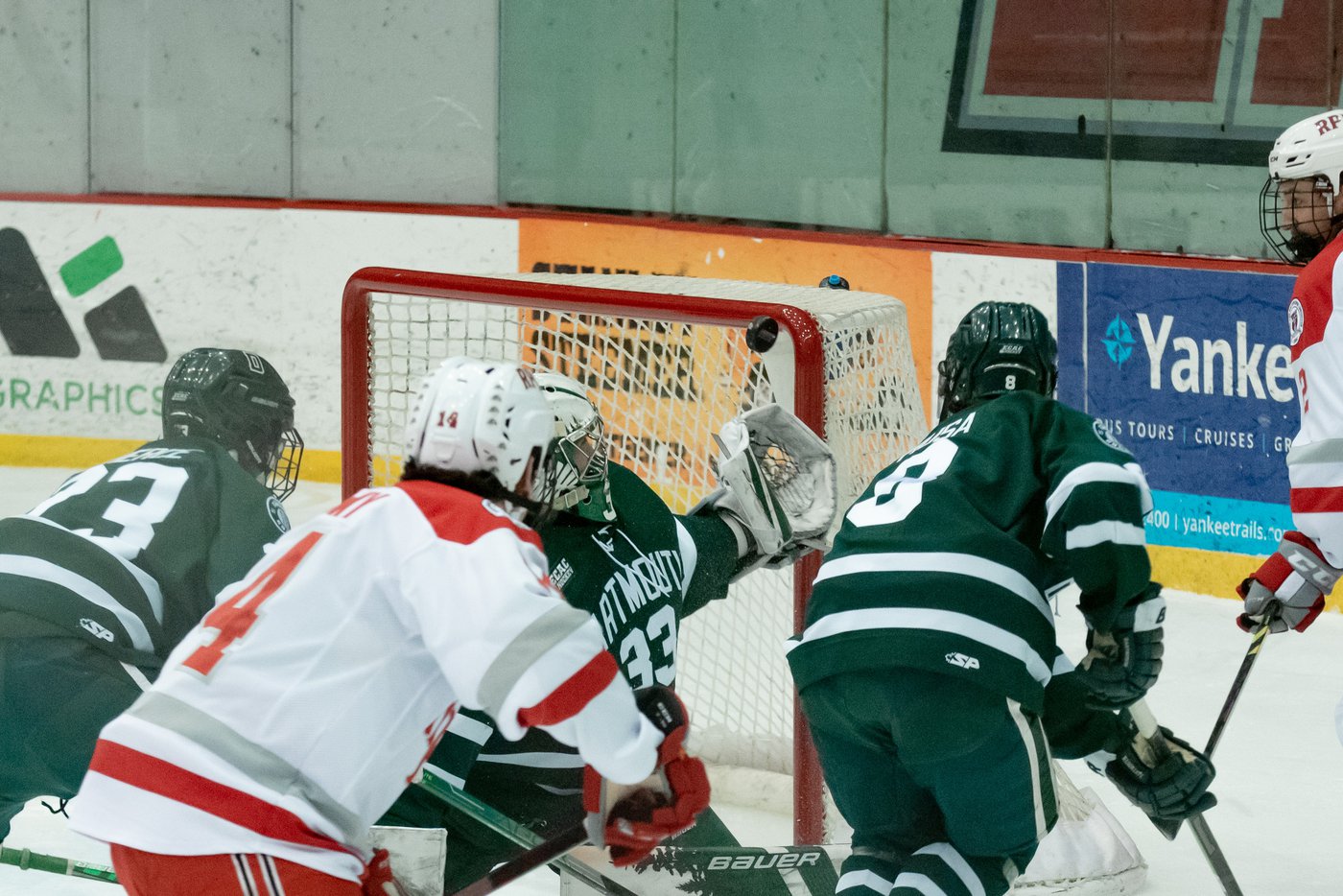 The Big Green went on the power play a minute later, but goaltender Jack Watson ’25 saved all three of their shots during the penalty. Dartmouth failed to gain any momentum from it, allowing RPI to continue pushing them back into their own zone. Neither team had any more threatening scoring opportunities. Heading into the first intermission, the Engineers led 1‒0.

RPI controlled the flow of the game in the second period. They would score ten minutes into the period on a power play. From the left faceoff circle, Ture Linden ’22 sent a tight pass through the center of the four penalty killers to Ottoville Leppänen ’22. Leppänen used his spectacular vision to pick out Lacka cross-crease. Stevenson could not react in time and Lacka buried his seventh goal of the season to put the Engineers up by two. 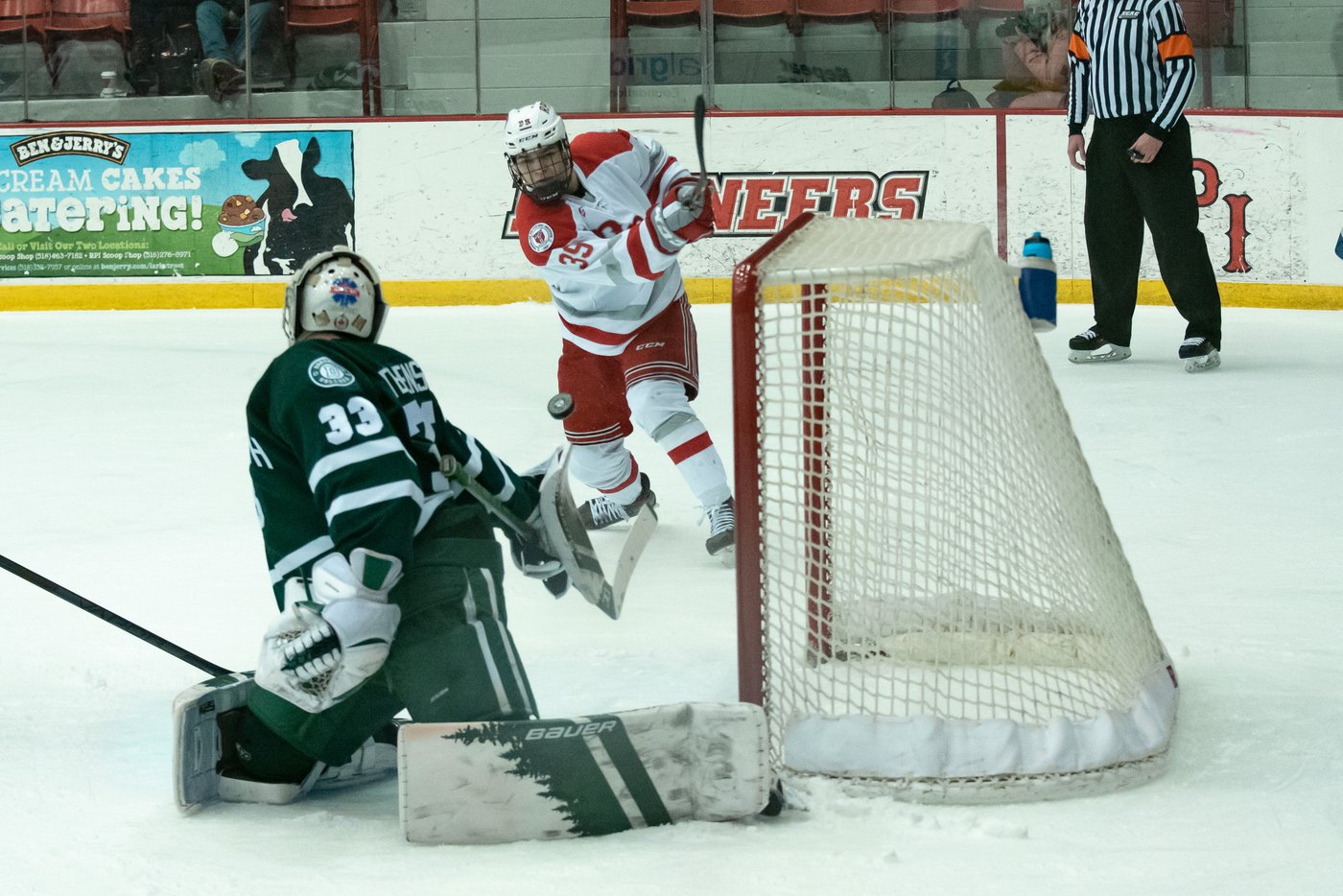 JAKUB LACKA '22 FIRES his goal into the back of the net. Andrew Days/The Polytechnic

Three minutes later, RPI would have another promising chance. John Beaton ’24 took the puck clockwise from behind the Big Green goal to the high slot and took a low-driven shot. Stevenson made a standard pad save, but the puck rebounded a little too far in front of him. He dove to collect the puck just as Shane Sellar (Gr) and Justin Addamo (Gr) were prepared to jump on it.

In the series, Dartmouth had initiated several physical encounters in front of their net after whistles. Two goals down, their frustration had come to a head. With less than a minute left in the period, Lacka received the puck by himself on the doorstep. Unable to get the puck around the goaltender, Stevenson covered the puck and Lacka’s stick was caught between the arm and body of a Dartmouth player down on the ice. Lacka attempted to pull his stick out but was instead met simultaneously by a punch from Stevenson and a takedown from Jeff Losurdo. In the altercation, Engineers Lacka and Linden were sent to the penalty box for roughing, along with Dartmouth’s Stevenson and Jack Cameron. Lacka was also given a minor for slashing, giving the Big Green a power play to end the period. Three seconds before the period ended, a scrum ensued in front of the Dartmouth bench, sending Kyle Hallbauer ’22 and Mike Gallant to the penalty box for roughing. The fighting only ramped up as the game progressed. 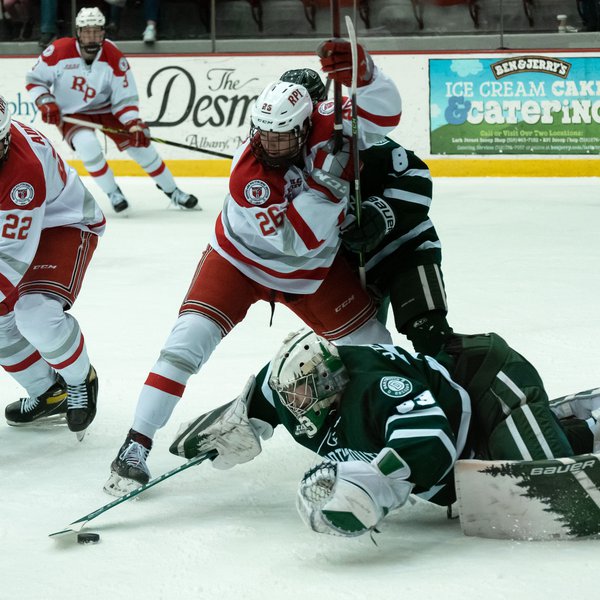 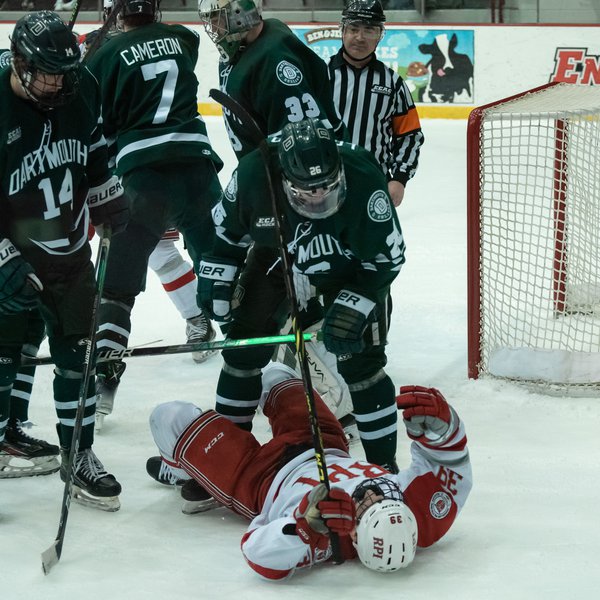 Dartmouth would get a goal back six minutes into the third period. Tanner Palocsik dropped the puck into a gap in the Engineer defense in the right faceoff circle to tee up Ryan Sorkin for a one-timer. Sorkin’s stick exploded out of his wind up, blasting a slap shot top shelf and off the post to bring the Big Green to only one goal behind.

The Engineers extended their lead eight minutes later. After Dartmouth won a faceoff in the RPI zone, Klee intercepted a pass and took it up ice. He passed it over to Linden, and they both entered the attacking zone. Klee got in front of a Dartmouth player, leaving him one-on-one with Stevenson when Linden returned the puck. Klee took the puck on his backhand, then quickly switched back to his forehand to lift the puck past Stevenson. Just his second of the season, Klee’s goal would be the winner. Less than a minute later, Dartmouth’s Harrison Markell took a shot from the wing that was going off target. Watson tried to hit the puck into the corner, but, in a lapse of concentration, inadvertently redirected the puck off the heel of his stick into the net. The flustering flub reduced the lead back to just one with five minutes remaining.

The Engineers were extremely close to padding their lead over a minute later. Linden fed Leppänen the puck in the left faceoff circle, no one between him and Stevenson. Leppänen went to his backhand and nearly snuck the puck five-hole. With Stevenson unable to land on the rebound, everyone fought for the puck in the crease. The puck came loose and Linden moved into space to take a shot, but a sliding Gallant blocked it up into the netting behind the goal.

Stevenson was pulled with about two minutes remaining, but the extra skater was not enough. Watson made a terrific save with six seconds left to deny Dartmouth an equalizer, with another fight ensuing after the whistle. The buzzer sounded for a 3‒2 RPI victory to force a Game 3 in the first-round playoff series. The teams faceoff for the last time this season today at 4 pm. 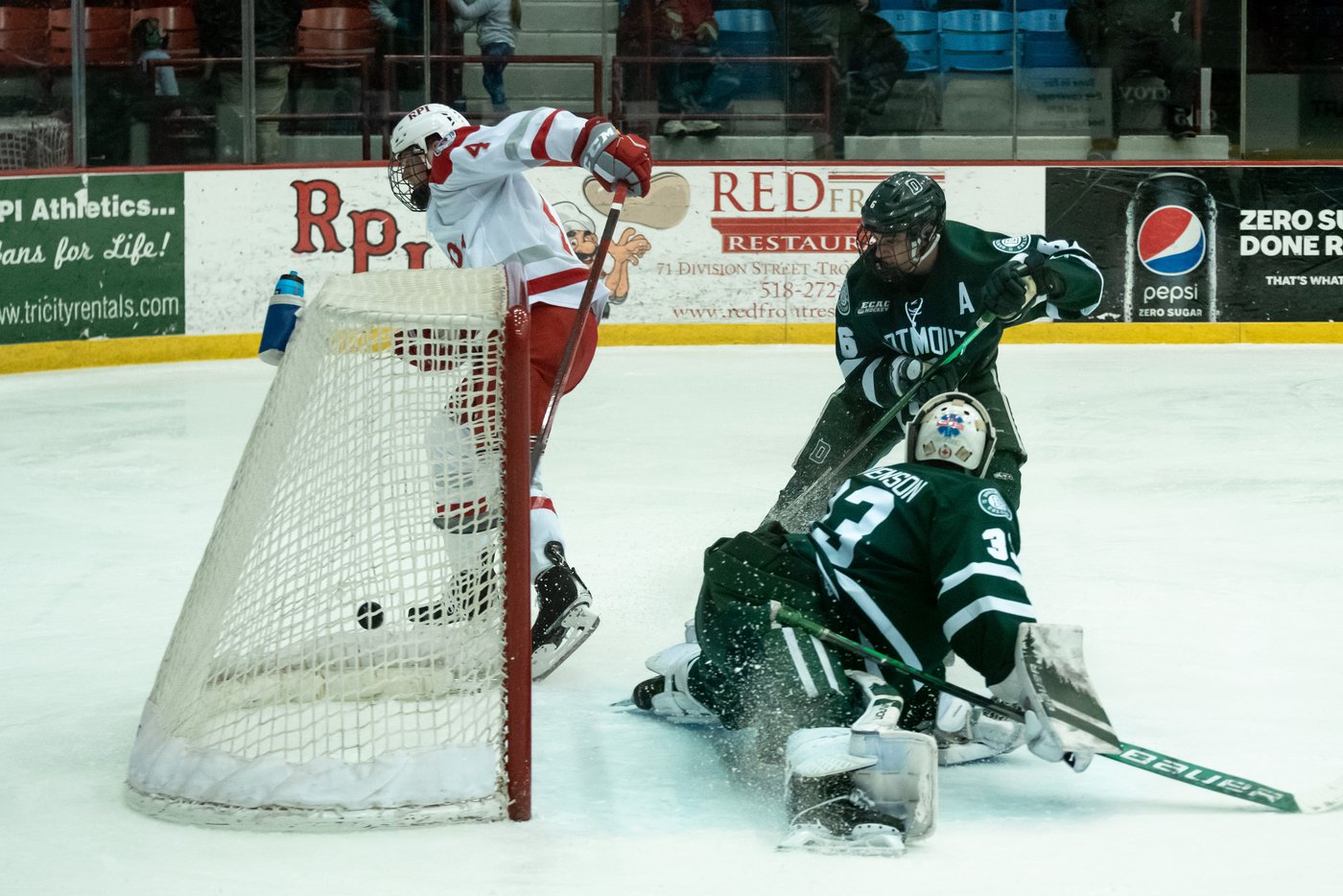