TURE LINDEN '22 WAITS for the referee to drop the puck for a faceoff. Andrew Days/The Polytechnic
By Andrew Days March 23, 2022

After a marathon Game 2 in which the Engineers scored in double overtime, Rensselaer and Harvard took the ice at the Bright-Landry Hockey Center for a final time to determine who would advance to the ECAC semifinals held at Lake Placid. The Engineers were just one game away—the closest they had come in 20 years—from returning to the former Olympic venue.

Sustained pressure from the Engineers in the offensive zone coupled with back-to-back power plays forced Harvard goaltender Mitchell Gibson to stop 11 shots in the opening ten minutes of Game 3, including an impressive double save to deny Ottoville Leppänen ’22. The Harvard penalty kill endured the short-handed four minutes and the Crimson began to build momentum with shots, culminating in the opening goal. Harvard’s Ryan Siedem sent a pass across the neutral zone to John Farinacci. The Crimson player took the puck down the boards and around the Engineer defenseman. Cutting to his right towards the net, Farinacci picked out the top right corner to put Harvard ahead. That score would persist into the first intermission, with RPI leading shots 14‒11. 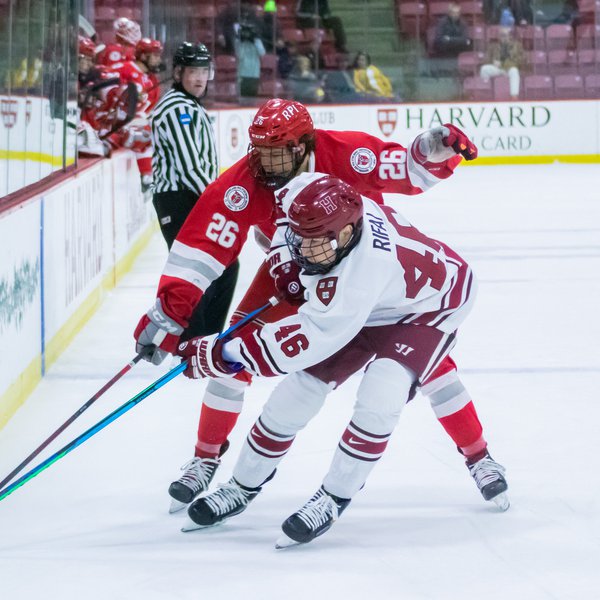 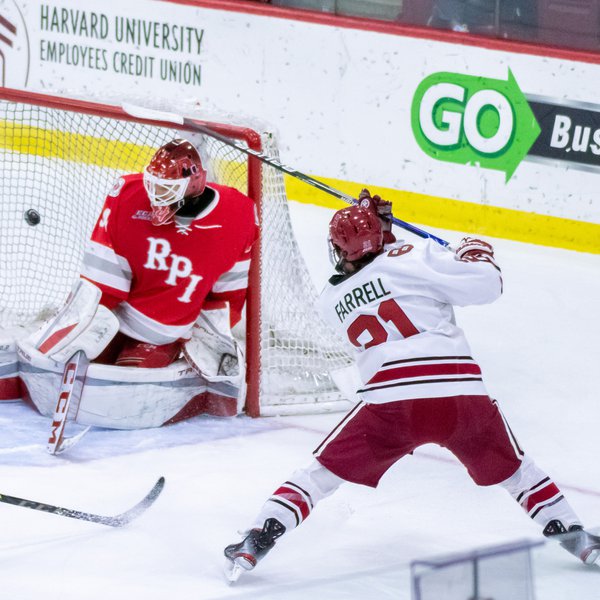 The Crimson started the second period on the power play after Jakub Lacka ’22 was sent to the penalty box for goaltender interference with a minute left in the first. In the dying seconds of the man advantage, Henry Thrun sent a pass into the slot from behind the goal line. Since the puck was too far in front of Matthew Coronato, he poked the puck to Casey Dornbach. The Harvard captain quickly switched from backhand to forehand and slotted the puck top shelf to extend the Crimson’s lead to two goals just after Lacka was released from the box.

Watson stayed alert with the period firmly in Harvard’s grasp. His best save of the night came with less than five minutes remaining in the second as a Harvard power play was expiring. From the blue line, Thrun spotted a gap in the RPI defense and played a pass to Coronato on the doorstep. All that the Harvard forward had to do was tuck it home, but he missed his initial chance. Watson’s reflexes allowed him to reach backwards with his stick all the way to the post to cover any follow-up, and he scooped up the puck to stop play. Watson kept the Engineers in the game as the second period came to a close with Harvard still leading by two goals.

With a two-goal hill to climb, the chorus of RPI faithful chanted “Let’s Go Red!” to motivate the Engineers. Less than two minutes into the final frame, Justin Addamo (Gr) nearly put the Engineers on the scoreboard. With his back to goal, Addamo tipped a pass from Kyle Hallbauer ’22 towards Gibson in the butterfly. The puck bounced off the goaltender’s pad and sat between the skates of a Harvard defenseman. Addamo contorted his body to get another scoring attempt, but his shot tumbled inches wide of the post.

Watson made another fantastic save six minutes after Addamo’s chance. After an initial save, the rebound hit off an Engineer skate and back towards goal. Back-to-back kick saves from Watson kept the puck out of the net. Loose in front of the net, Harvard’s Nick Abruzzese reached out his stick, skewering Watson in the process. Harvard celebrated as if they had scored, but the puck never crossed the goal line. The referees whistled the play dead after Abruzzese’s stick speared Watson’s glove hand. 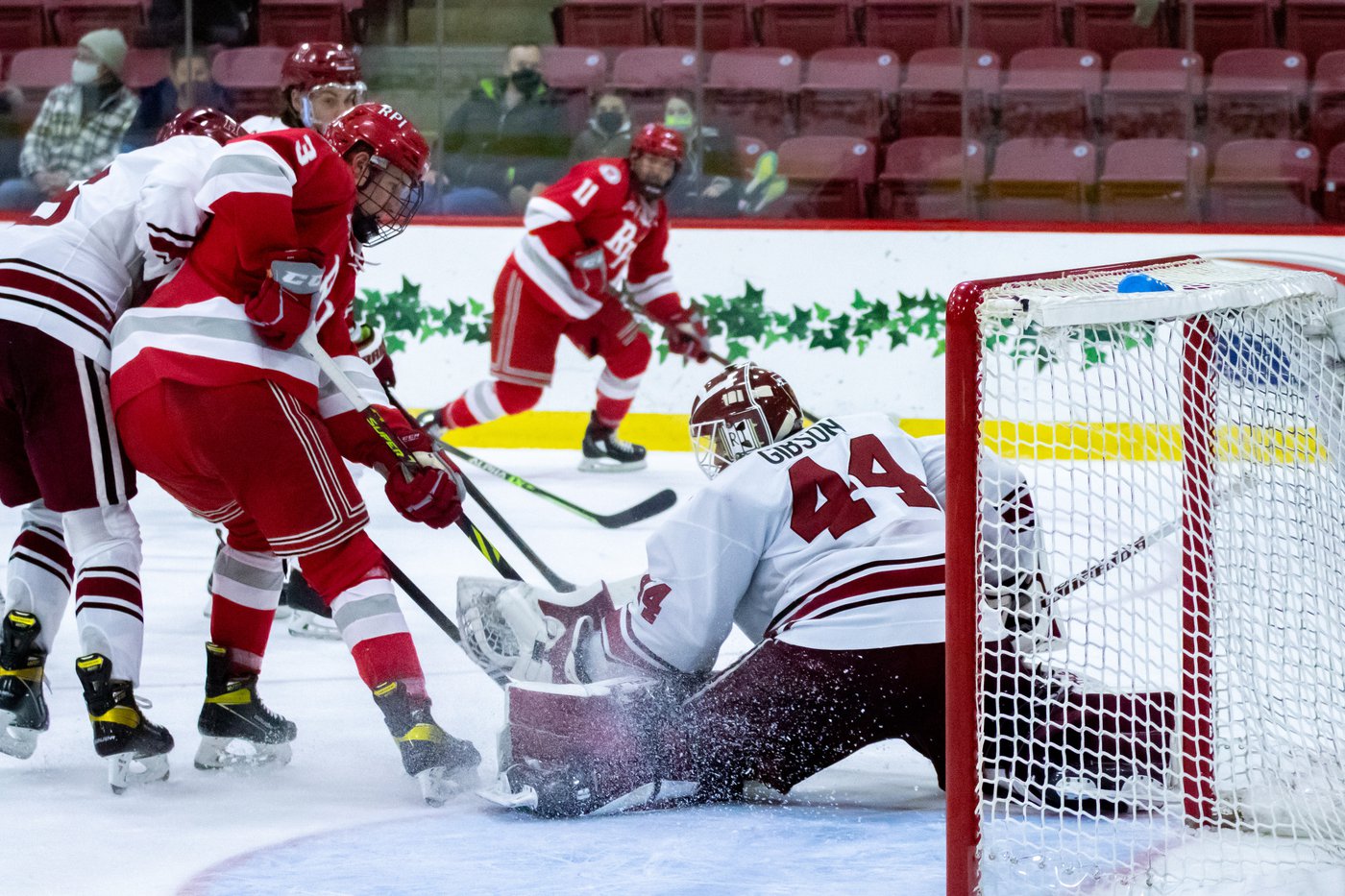 With the clock hemorrhaging time, RPI desperately searched for a goal. The Engineers barraged Gibson with shots in the final five minutes. The goaltender stood up to the challenge, making a few great saves. With less than four minutes remaining, an interference penalty on Harvard gave the Engineers the opportunity they had been looking for. Immediately pulling Watson for the start of the power play, RPI were 6-on-4 against the Crimson. The Engineers worked the puck around the zone, freeing up Leppänen on the doorstep. Lacka sent the puck cross-crease to his open teammate and Leppänen buried his ninth goal of the season past Gibson to reduce the Harvard lead to just one goal with three and a half minutes left to play. 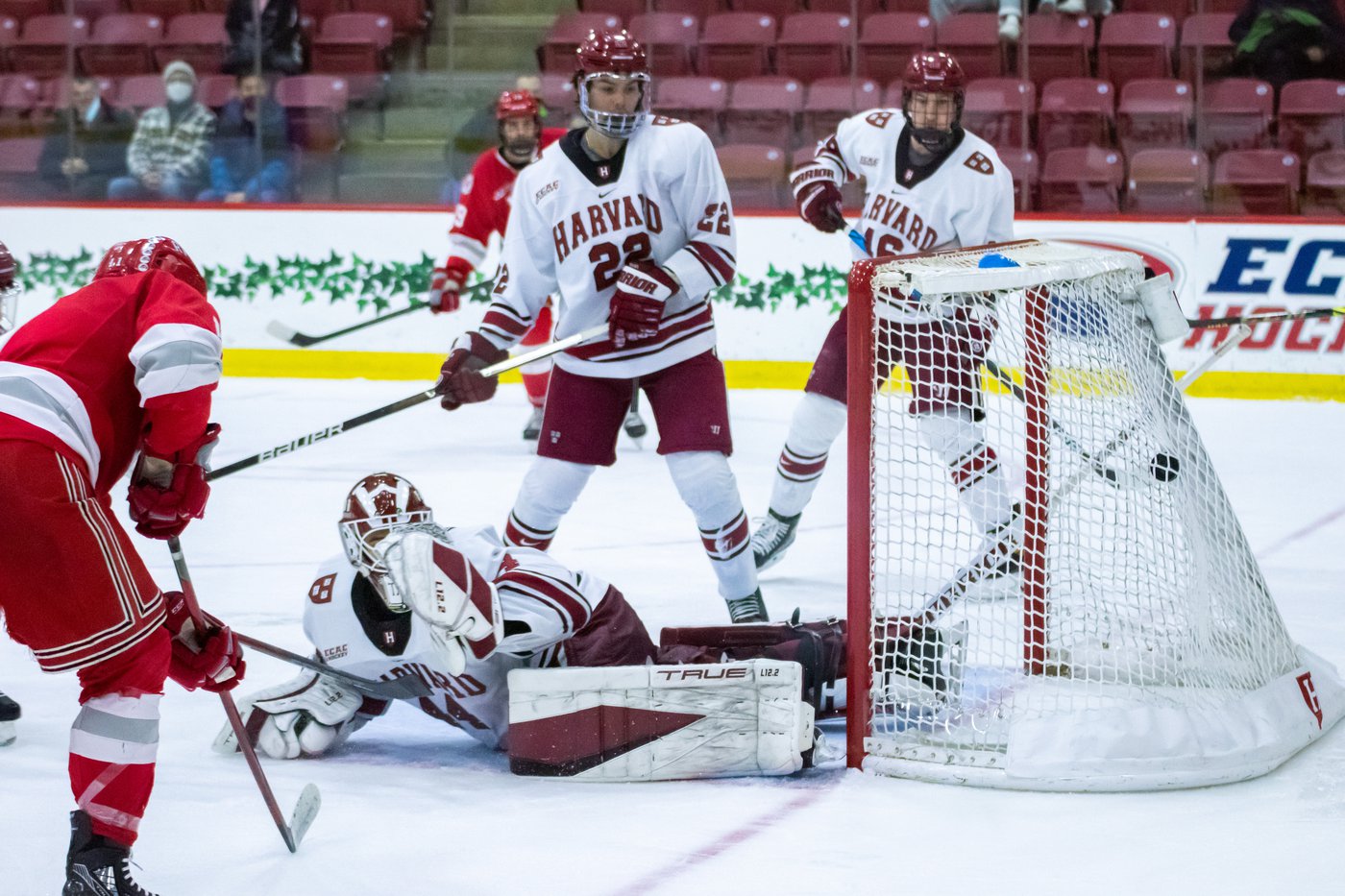 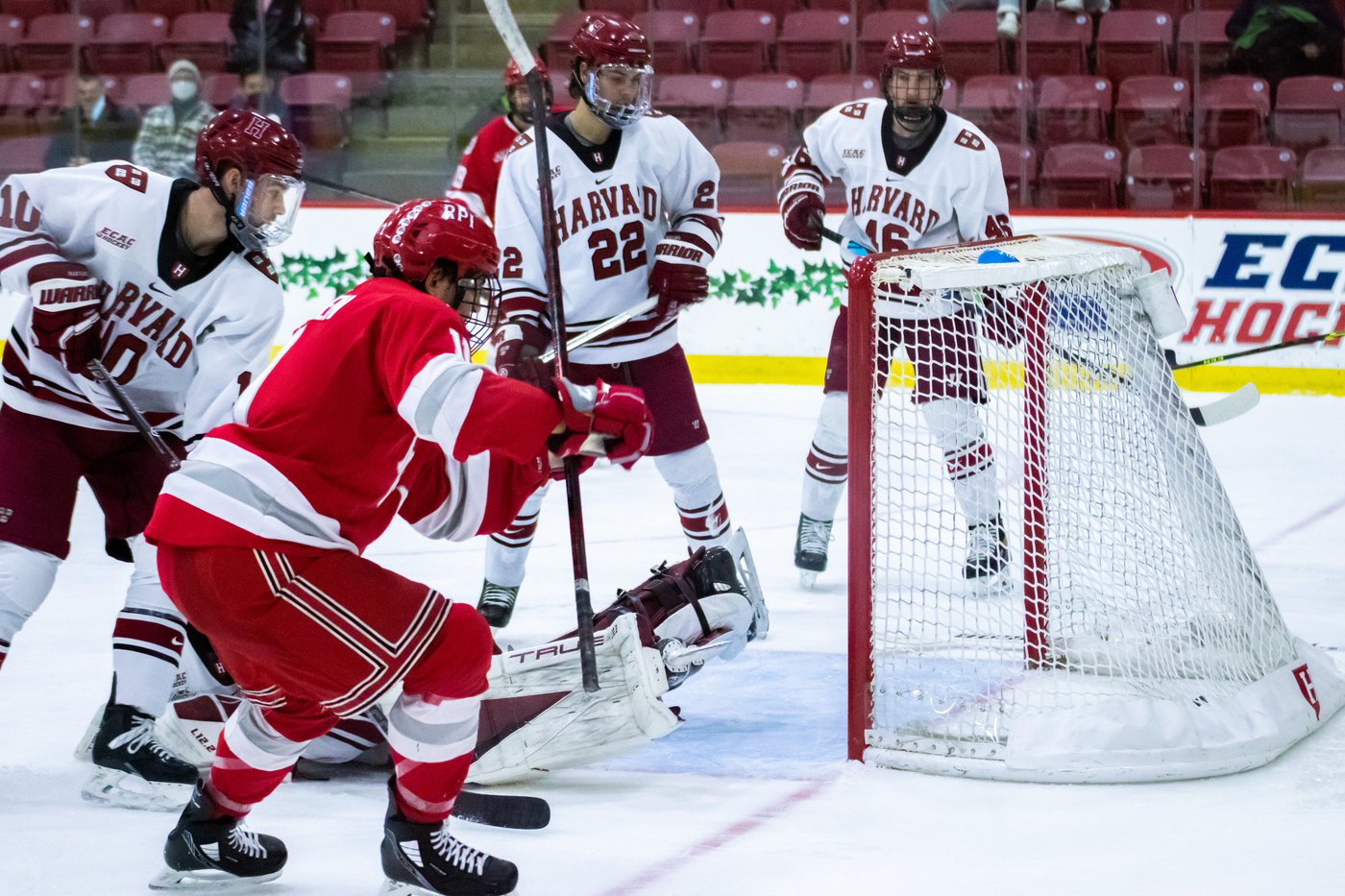 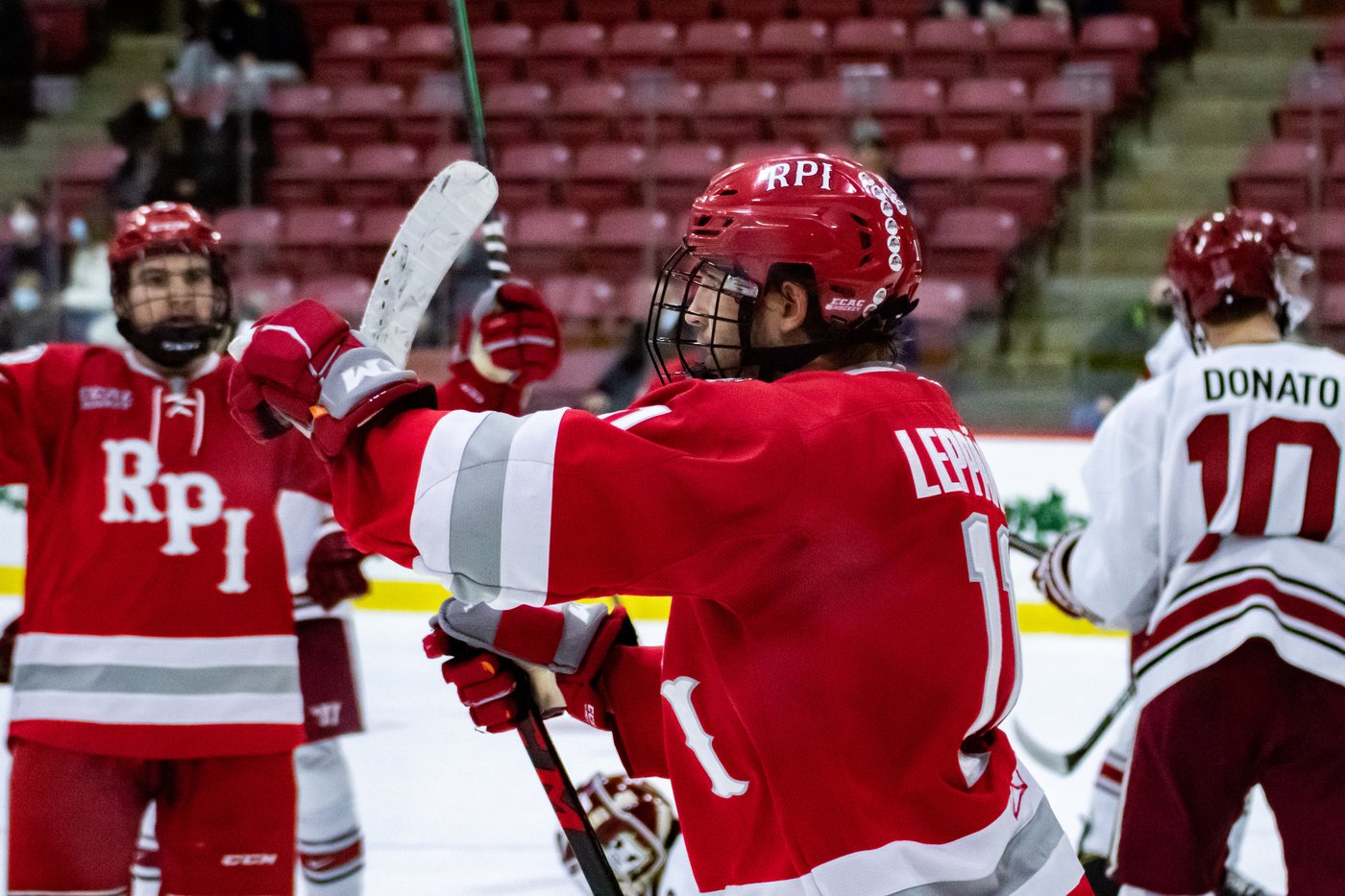 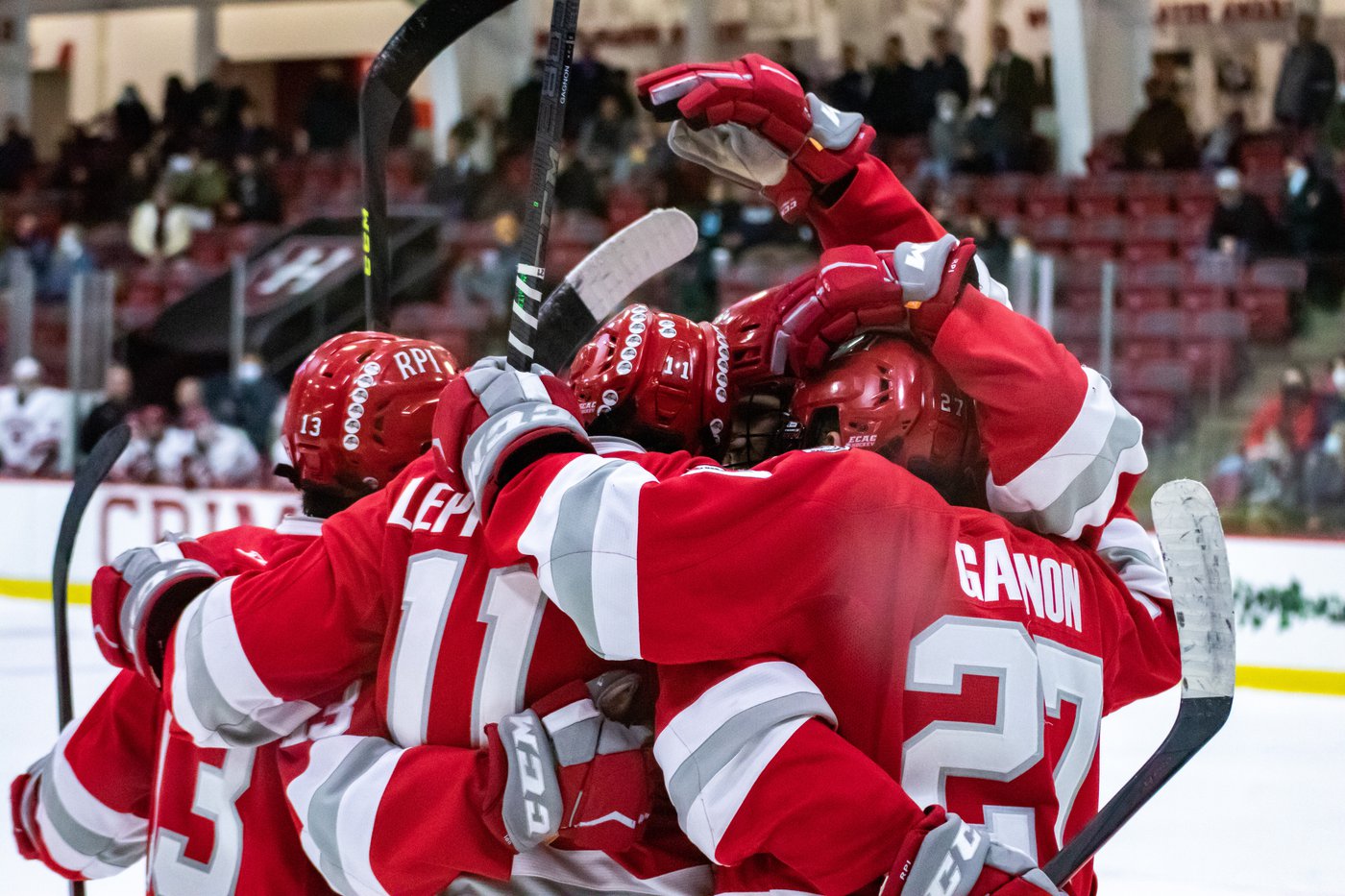 The Engineers shook off the Crimson’s offensive pressure with a little over two minutes remaining, allowing Watson to skate to the bench. RPI could not hold on to the puck and a Harvard shot from the neutral zone hopped wide of the post. With less than a minute on the clock, a mistake from Simon Kjellberg ’23 at the Harvard blue line nearly cost the Engineers a goal as well. Coronato poked the puck free and the foot race began with the puck sliding down the ice. Kjellberg used his strength to keep Coronato from touching the puck and the Engineers regained possession.

A missed chance in the Harvard zone set up the Crimson on an odd-man rush. TJ Walsh ’22, the only Engineer back, did his best to cover the empty net and the pass across the zone. Seeing Harvard’s Sean Farrell open up his body for a shot, Walsh dove to block the shot but his stick could not reach far enough over to stop it. The puck dinged off the post and to the opposite side of the zone, but a trailing Coronato was there to tuck it home. Harvard advanced to the ECAC semifinals for the sixth consecutive eligible year. Click here for the box score.

Despite falling in the quarterfinals, the Engineers showed their determination to play. Captain Ture Linden ’22 finished his senior season with the most points by an Engineer in eight years with 39. He also finished the year leading the ECAC in points and goals, making him a finalist for the ECAC’s Player of the Year. Watson returned to the squad halfway through the season due to injury and put up impressive numbers. He joins the company of Owen Savory and Jason Kasdorf ’16 for RPI goaltenders in the past nine years to record three shutouts in a season. Also, Watson totaled an outstanding 119 saves in the Harvard series, including 47 saves in Game 2. He finished the season with a 0.922 save percentage. The Engineers return to Troy defeated, but hopeful for next season.