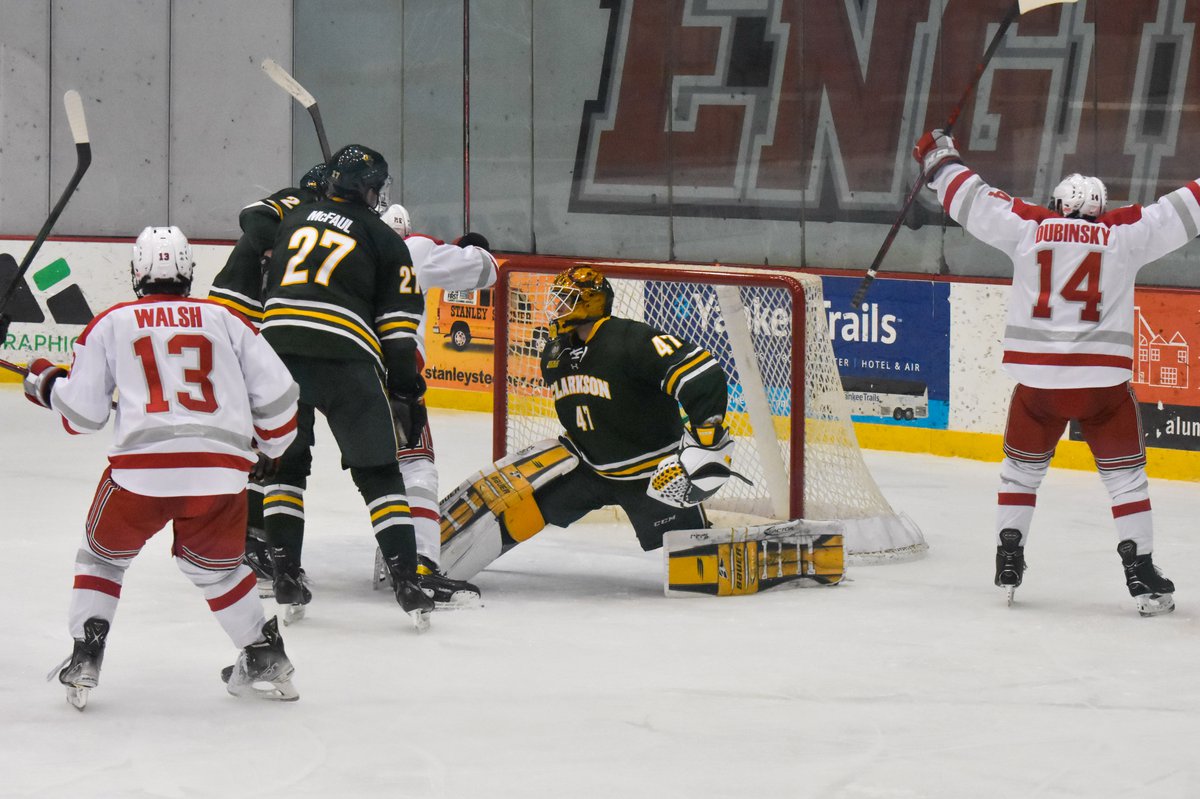 After losing 4‒3 the night before to St. Lawrence University, Rensselaer took the ice once more to skirmish the Clarkson Golden Knights on Saturday.

The first period started uneventfully with neither team having threatening offensive opportunities. However, the Engineers were a pest in the offensive zone, forcing the Golden Knights into plenty of turnovers.

About halfway into the period, Clarkson had a great opportunity to score when Alex Campbell entered the offensive zone with speed. He took a shot trying to find the right side of the net, but RPI goaltender Linden Marshall (Gr) stuck out his pad to make the save.

The Golden Knights struck first with a little less than six minutes remaining in the period.An Engineer tipped a pass from Jack Jacome and the puck ended up on the stick of Ryan Richardson within feet of the net. Richardson lifted the puck over Marshall’s extended left pad and into the net to put the Golden Knights ahead. The opening period came to a close with a score of 1‒0 in favor of Clarkson.

Both teams looked evenly matched coming out of the locker rooms. Less than six minutes into the period, Clarkson forward Mathieu Gosselin received a centering pass and took a shot that rang off both pipes. Following the shot, the puck was loose in the crease as another Golden Knight fell onto Marshall. After a bit of a scramble, the Engineers managed to clear it away.

The tides turned when Richardson was sent to the penalty box for hooking, giving the Engineers their first power play of the night. Ture Linden ’22 won the faceoff and, after a couple passes, the puck made its way to Shane Sellar (Gr) in the corner. Ryan Mahshie ’23 darted towards the crease and Sellar sent a quick pass his way. Mahshie went top-shelf on Clarkson goaltender Ethan Haider to tie it up at 1‒1, ending the power play after just seven seconds. The Engineers continued their form, but the period ended before they could take advantage of their momentum.

The third period began as a true battle between the deadlocked teams. Luckily for RPI, Marshall had a phenomenal third period, with the highlight being a terrific back-to-back save. With a little less than 11 minutes remaining, Johnson intercepted a Clarkson pass in the neutral zone. The Engineers came back up the ice and Jack Agnew ’24 opened himself up in the right faceoff circle for a shot. Haider saved his shot but Justin Addamo (Gr) was there to finish off the rebound for his first goal as an Engineer, giving RPI a 2‒1 lead with 10:31 left to play.

A couple minutes after, the Engineers possessed the puck in the offensive zone. TJ Walsh ’23 circled around the goal and centered the puck to Zach Dubinsky ’23 in the low slot. Dubinsky went five-hole on Haider and the puck trickled over the line for RPI’s second goal of the period, extending their lead to 3‒1.

The Engineers held off the Golden Knights for the rest of the period. Clarkson pulled Haider to give them a man advantage for the last two minutes, but it was to no avail. The game ended in a 3‒1 victory for the Engineers, bringing their season record to 5‒3‒1 and their ECAC record to 3‒1‒0. The Engineers will play their third and fourth consecutive ECAC games with away trips to Colgate University on November 12 and Cornell University on November 13.