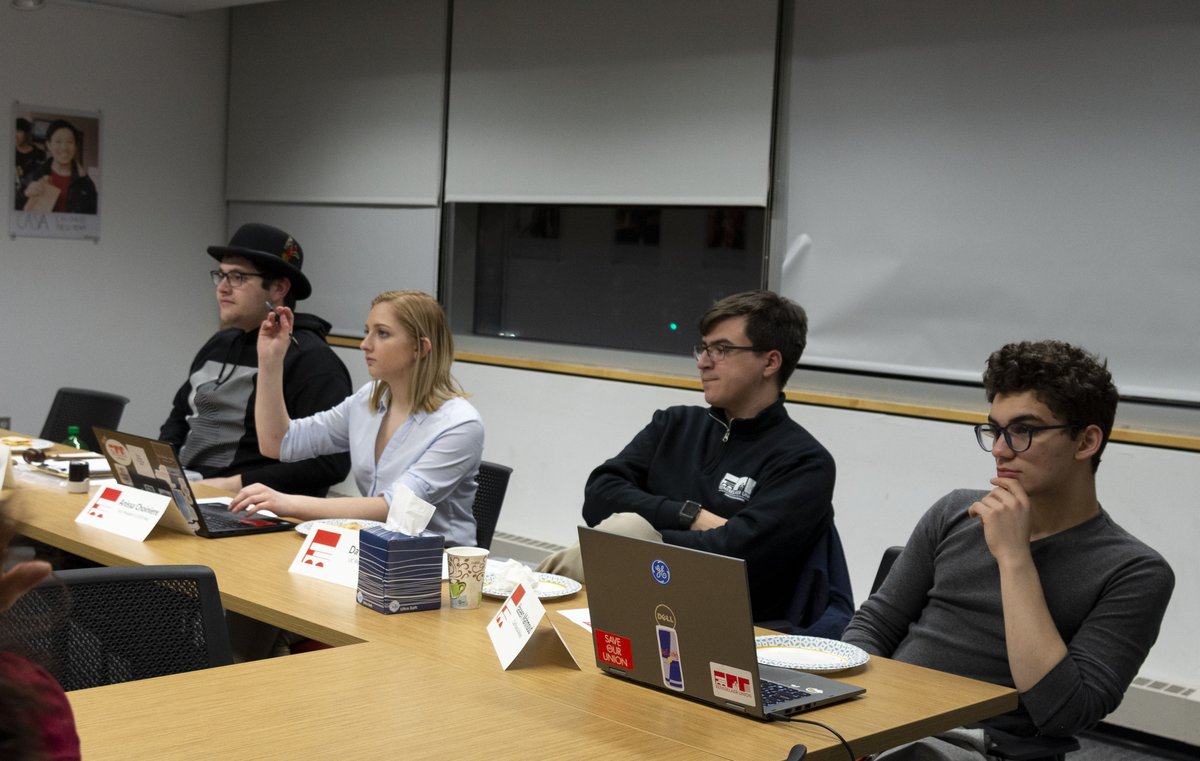 VICE PRESIDENT OF THE UNION ANISSA CHOINIERE '20 COUNTS as members of the Executive Board vote. Madeline Wilson/The Polytechnic
By Quinn Gangadharan February 20, 2019

The Executive Board “revoke[d] Room 3332 in Rensselaer Student Union from Statler & Waldorf, effective at the end of Fiscal Year 2019” and reallocated money in the Rensselaer Music Association’s budget toward a jazz clinic on Thursday.

Statler & Waldorf is a satirical literary magazine, and has been on probation recently due to inactivity. Policies Committee Chairperson David Raab ’19 explained that the only equipment the club needs to produce the magazine is a computer, and that could be used at another location. President of the Union Justin Etzine ’18 ’19 G explained that the Board had given S&W the opportunity to appeal this in person, but they declined the offer. Etzine also added that there are more offices in the Union that will be moved around, but that it is too premature to discuss further. The motion to revoke the room passed 15-0-0.

President of the Rensselaer Music Association Erin Solomon ’20 came before the Board to request a reallocation of $500 in the club’s budget from water jugs and acoustic absorptive panels for a “clinic program” with jazz artist Paul Pesco. Solomon explained the water jugs were no longer relevant due to the J-Building installing water fountains, and that RMA has acoustic absorptive panels. Solomon went on to explain the proposed jazz clinic—an opportunity to meet with Pesco as a group and learn from him—is only $500, rather than the typical $10,000 because Pesco is still testing his program out. According to their proposal, RMA already has approximately 25 members who would attend this event. Vice President of the Union Anissa Choiniere ’20 asked if this would be open to anyone or just RMA members, to which Solomon said she was willing to have this as an open event. The reallocation passed 14-0-0.

Additionally, the Board brought up “Barco”— a software to project directly from laptops that would eliminate the need for HDMI cords for presentations in the Shelnutt Gallery. The program is $1,600 for two USB disks that would be used with the software on any computer. These would be available to be signed out from the Union Admin Office. Discussion began with Club Operations Chairperson Caitlin Kennedy ’19 by asking what the problem was with HDMI, to which Raab explained costs would comparable to repairing the existing system. The discussion was tabled until the next meeting because the Business Operations Chairperson Brian Mansaku ’20 and Vice Chairperson Jared Segal ’19 were not present for the proposal.

Etzine’s appointment of  Club and Organization Representative Rachel Antmann as the Executive Board’s representative to the Elections Commission passed 14-0-1.