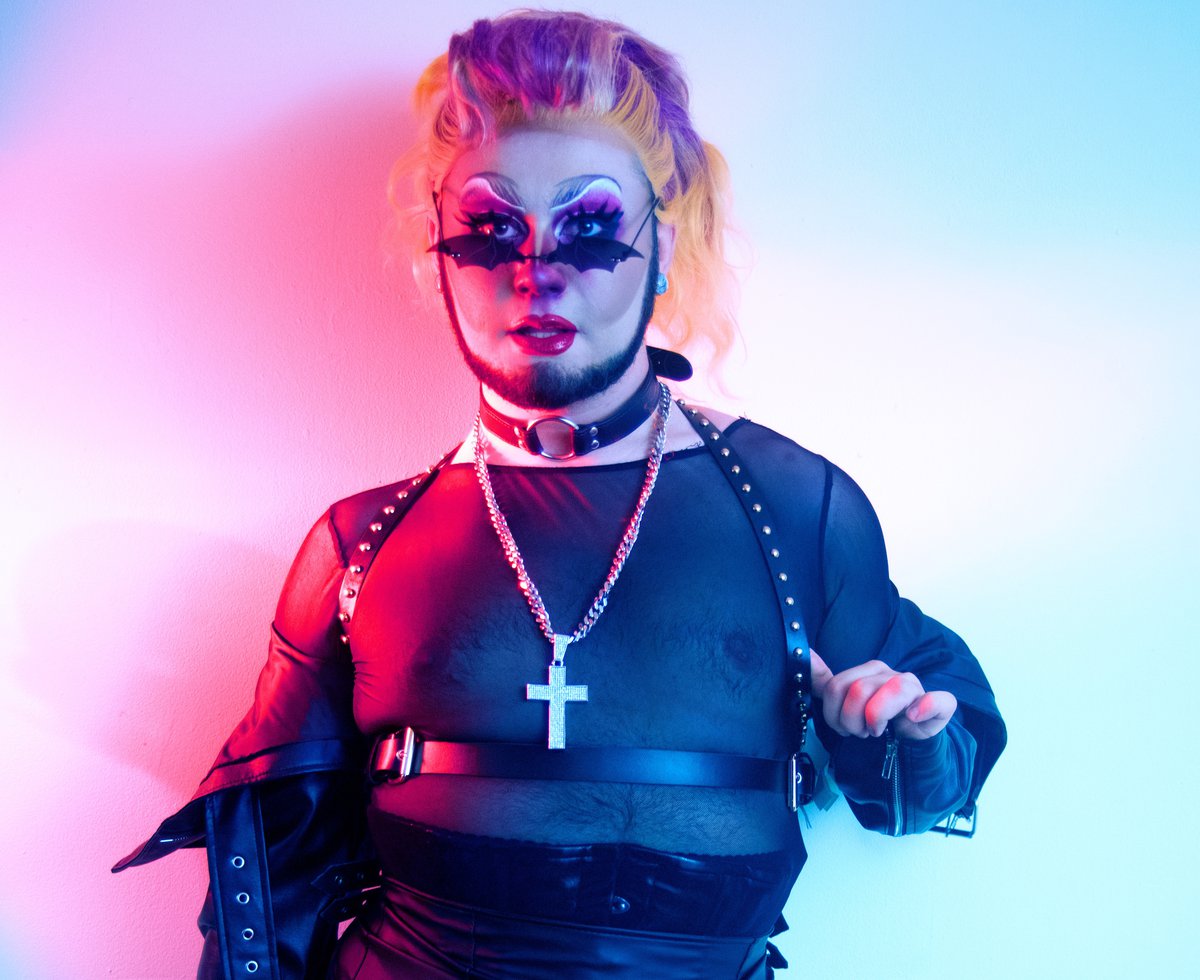 TYPHOID MARY DISCUSSES their work as a drag queen in Troy and the greater Capital Region. Instagram: @typhoid.maryxx, Photo by Star Herrera
By Erik Cross and Laura Zwirn October 20, 2021

Laura Zwirn ’23 and Erik Cross ’23 interview local drag artist Typhoid Mary to learn more about their artistic endeavours as well as their lived experiences as an artist in Troy.

Please tell us about yourself and briefly walk us through how you got to where you are today.

My name is Typhoid Mary, and it was a long journey to get where I am today. I started doing drag around the beginning of 2019, officially. Before that, I would go out to the local bars in a little makeup here and there, maybe pull a look or two; I didn't actively start performing until the spring of 2019. Typhoid Mary has been described as your local friendly neighborhood drag cryptid. Constantly they are seen wearing the same plaid skirt and leather thigh-high boots. She's been unofficially dubbed the “goth thicc e-girl emo punk rock princess gf of Albany”

Yes—the icon, legend, and first recorded asymptomatic carrier of Typhoid fever in the U.S. Also the Marvel supervillain. But mostly it was a name that no other drag artist was using. I am the only Typhoid Mary.

For people who aren’t familiar with what you do artistically, please explain a bit about your work and what you do.

I am a performer, a host, stage manager, producer, graphic artist, I pretty much do it all. My performances are known for being theatrical and genuine, performances that are based on how I am feeling or an experience that I care to share on stage. For most people that is the draw of Typhoid. Not only am I a beautiful punk rock goth princess, but when I am on stage, I am performing something I want to perform.

I've lived in the upstate area all my life—born and raised here in Albany. I started performing in 2019, so roughly two years.

How did you get into drag? What led you there?

Years of watching Drag Race, then discovering my local scene—but mostly discovering Dragula (The ‘alternative’ drag competition reality show) and my love for horror movies growing up. My creative background and my want to change my local scene are what led me to start doing drag.

It seems that drag artists have skills in many artistic areas, including hairstyling, makeup art, fashion designing, dancing, acting, singing, etc. Which of these are your favorite and why?

My favorite is makeup. It's like painting for me, being able to reshape my face in the way I want to is really cool. Also, the growth that I have had in just under a year is amazing. Lockdown really helped me hone my craft when it came to painting my face.

What does being a drag artist allow you to do or express about yourself that otherwise, you would feel unable to?

Drag in the beginning really helped me deal with some of the emotional trauma I was going through at the time, along with giving me a new creative medium to play with.

There is a decent-sized community of drag artists in the area. At first, I was not well received by some of the self-proclaimed ‘top dogs’ of the area—but I was quick to find the other ‘baby queens’ and artists who I knew would support me. They really are what kept me going in the beginning. The local bars (Waterworks Pub and ROCKS) really helped with their open drag nights, along with the people I met through performing there.

What subjects or themes do you tend to focus on in your work?

I choose to make some of my works revolve around horror movies, video games, and other things around my own identity. My own struggle and ultimate acceptance of my mental health and body image are other subjects that I have been known to showcase in my performances.

How has your racial, gender, and cultural identities influenced your experience as an artist/performer in Troy?

Drag has allowed me to explore my own identity—really be able to play and figure out what ‘masculine’ and ‘femininity' mean to me and my gender identity and expression.

Who or what are your inspirations in art and in life?

My drag and art are inspired by goth and alternative fashions from the 80s, 90s, and current years. Along with anything ‘emo’ and ‘punk.’ This can be seen in my art, posters, and looks. Also Furbies. I love those little bastards.

Have you met anyone in the Troy/upstate area that inspired you/changed your worldview?

There are so many amazing performers and artists that I have met in the area, but one of them really sticks out to me the most. Ruby Madness. They, unfortunately, do not perform anymore but they have always been on the same page as me when it came to drag in this area. They eventually became one of my closest friends. (They aren't dead—they just moved to Ohio. For school.) 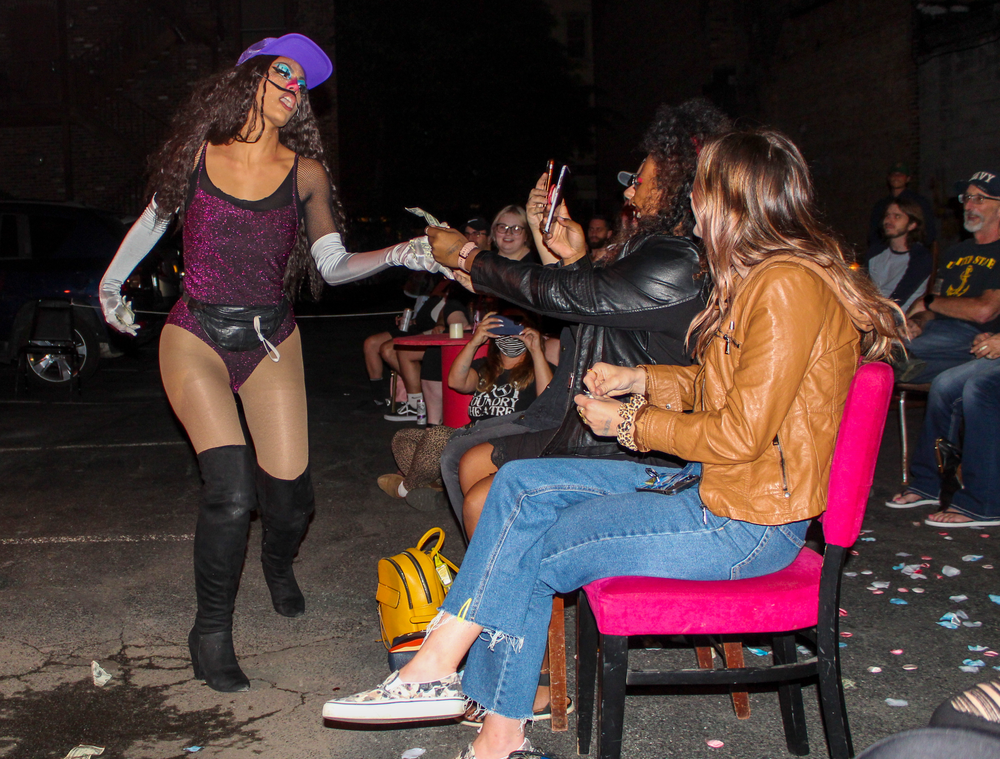 What hardships if any (that you feel comfortable discussing) have tried to hold you back? Which ones were the hardest to overcome? Have they made you change paths or consider changing paths?

My own struggle of dealing with self-worth and feeling as if what I was doing wasn't actually doing anything. During the lockdown—drag went digital. So I was flung into creating digital performances to showcase. It was a new medium that I was excited to do at first, but it was something that felt like a lot of work for a little reward towards the end. It almost made me quit drag—there were moments in 2020 where I wanted to take a break or just quit until bars reopened and I could perform again. It wasn't until the beginning of 2021 where I really was starting to get recognized for the work I was doing in the digital aspect.

Was it easy to get into doing drag? What challenges did you face starting out? Did you have any mentors who helped you?

It was expensive—that's what. I also had a lot of friends who were into make-up, so buying products that worked for me was easy. I was nervous to start performing, so I started performing in the New Paltz area. Just me bringing a few friends downstate to see if I even liked doing drag. My mentality was ‘I don't want to be associated with anyone, cause If I fall flat on my face—at least I'm just embarrassing myself.” Eventually, I would start performing in Albany and really making a name for myself. Along with one of my friends (Andramada, from New Paltz) becoming my ‘drag mom’ and really helping me with my painting skills. 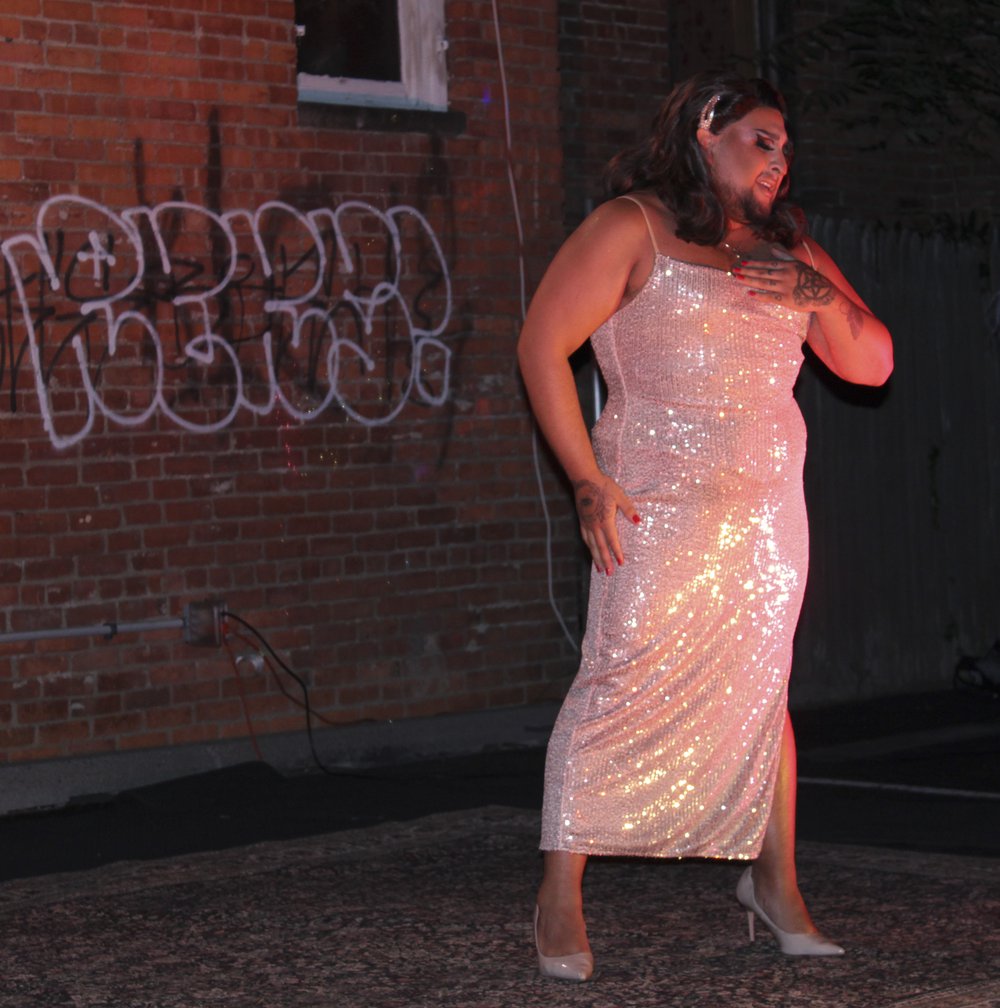 ANDRAMADA DRAMATICALLY LIP-SYNCS to a song during the Typhoids Takeover in Downtown Troy. Laura Zwirn/The Polytechnic

Has your career as an artist/performer led you to make connections you haven’t thought you would? Who have you met through your work that seems most unique to you?

I've met some really really amazing artists and have been able to connect with them on a level I don't think I would have as a fan (even if I was fangirling about meeting them behind closed doors). I've met so many cool artists but one of the coolest I have met so far would have to be Saint (formerly St. Lucia), from season 3 of Dragula and the winner of Dragula Resurrection. Due to a hotel issue—they ended up staying at my place and honestly, we just talked about video games and sushi for like three days. It was amazing.

What venue has been the most fun/memorable to perform at?

My favorite place to perform so far was Troy Foundry Theatre, they were an amazing crew to work with and the venue was really cool! I had never done an outdoor show like that before. I can't wait to work with them again in the future.

Do you mainly aim to make your performances entertaining or is there another goal, such as commenting on social norms, gender norms, etc., or something else entirely?

I want my performances to be entertaining to myself and the audience. I want them to feel what I am feeling when I am performing. I think that is what separates me from other local performers. I perform what I genuinely want to and how I am feeling. Performing songs that speak to me is what is very important to me as an artist and a performer. But I am also a clown. I've even been known to perform the occasion meme mix that I make.

What has been your biggest accomplishment as an artist/performer thus far? What are you most proud of in your career?

Being able to create a space for myself and other performers. One of my goals, when I started drag, was to change the scene. I'm starting to feel like I am finally on that path to change. My monthly show, Typhoids Takeover, has been a huge success thanks to all the performers, the audience, and the venues who have been supporting us! 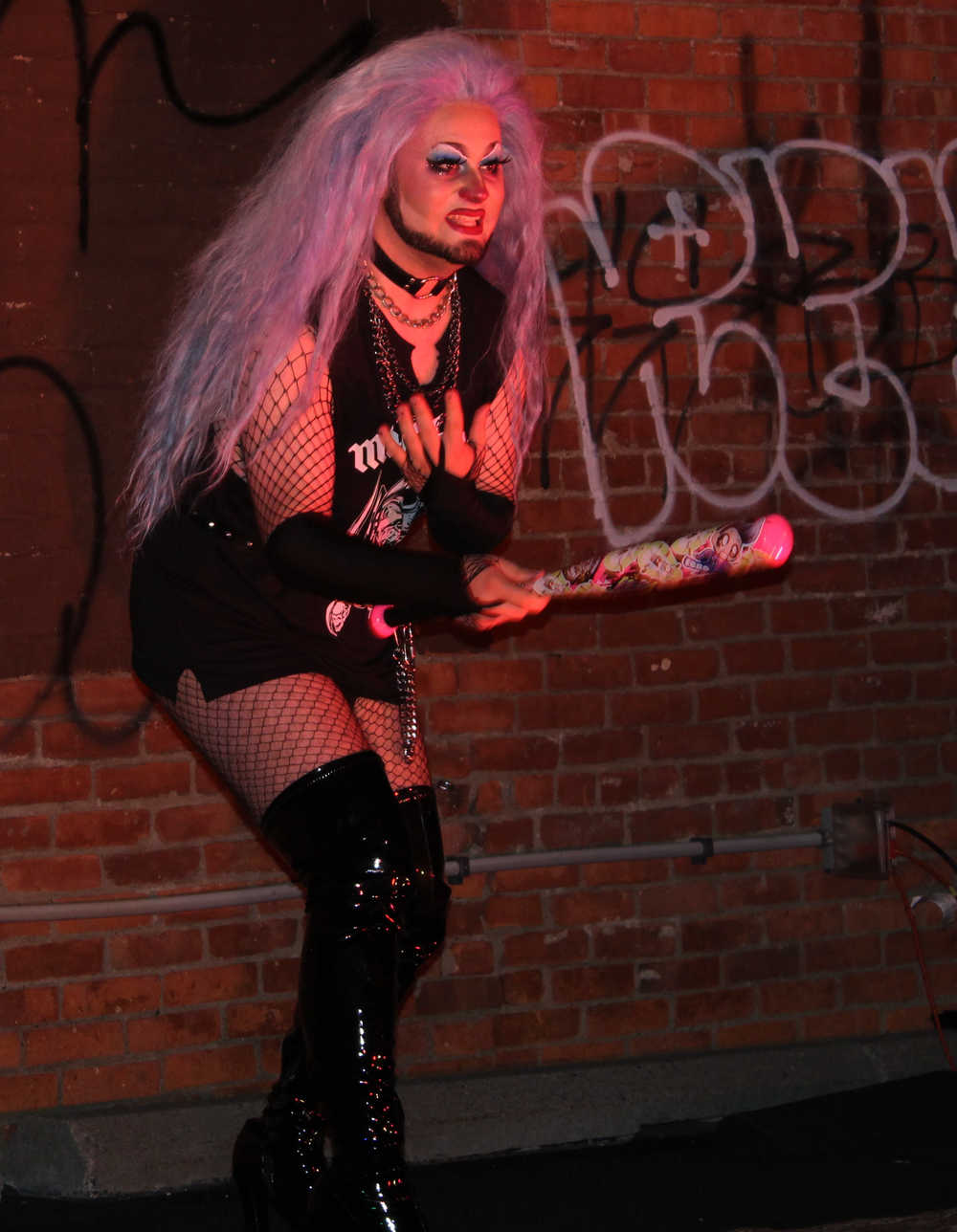 What advice would you offer to others wanting to get started in drag, but may be having doubts or facing challenges you've faced?

Don't stop. Even when you want to. If this is what you feel like you should be doing—do it. Don't let anything stop you. Ask for a spot in that show. Wear that outfit again. Blend your makeup more. Watch a video or two. Don't be afraid to ask questions—we are all performers and we aren't as scary and intimidating as you think.

Don't let your only frame of reference for drag be what you see on TV. Just enjoy it. Enjoy the local scene. Enjoy the journey the performer is taking you on. Drag is more than just splits and dips.

Where do you see yourself in five years? What are some of your goals and aspirations for the future, artistic or otherwise?

Where can people find you on social media, online, etc.? How can people support your work?

Editor's Note: Responses have been edited slightly for clarity and grammar.