Posted on November 15, 2017 in Uncategorized by Serge Piskun, Senior Reviewer 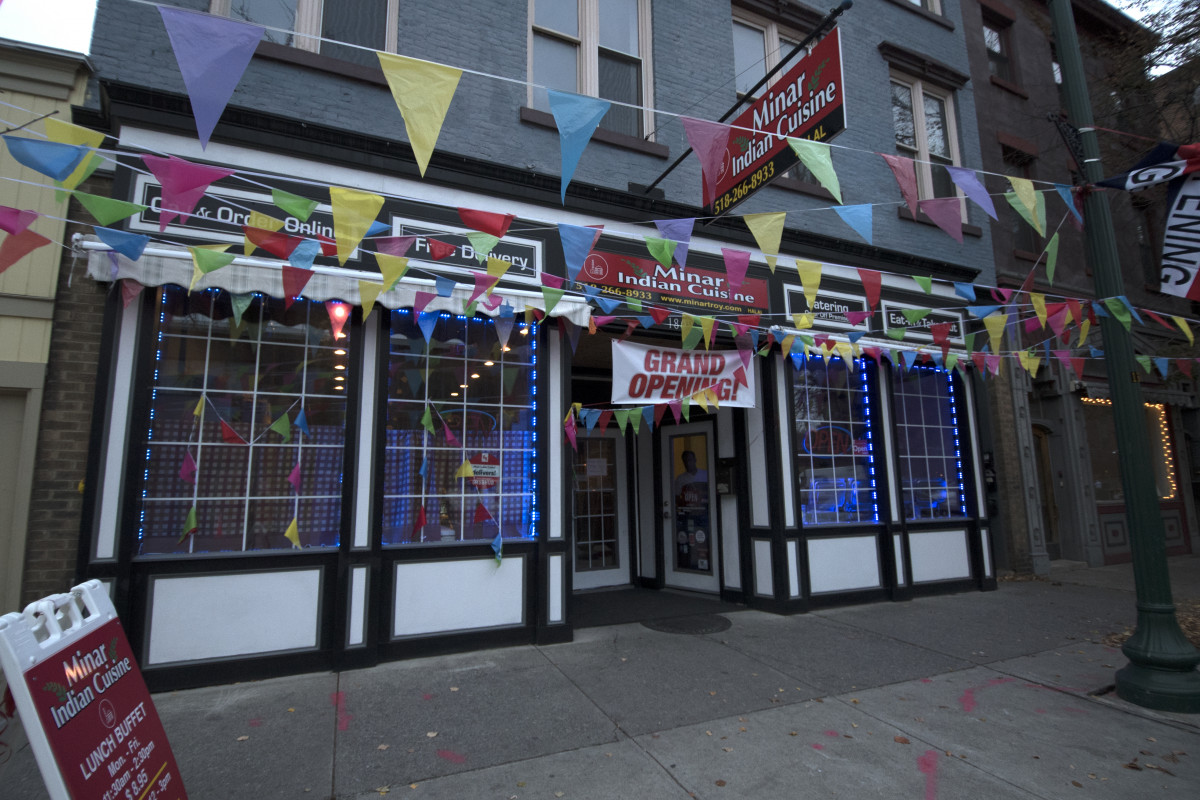 This week, Crystal Vejar ’20 and I decided to check out Troy’s newest Indian restaurant: Minar. Nested on 5th Avenue, near Blitman Residence Commons, it strives to be the go-to hotspot for students craving curry and other traditional Indian foods. The grand opening was in September, and the place was decorated in banners and streamers. They also have lots of coupons and deals on their menu available at the restaurant.

To make this a fair review we decided to get two of the most popular dishes, as these are statistically the ones that students would likely get when their cravings for Indian food hit. We decided on one order of chicken tikka masala, one order of chicken korma, and an order of garlic naan. A few days after, we ordered delivery to try some of the appetizers. We ordered chicken ceylon and malai kabab as our entrees, and aloo tikiyas and samosas as the appetizers. We ordered the malai kabab as a special, which included basmati rice, naan bread, cucumber raita, and mango chutney.

Starting off with the tikka masala, we both agreed that it was pretty good. It was a different style of tikka masala from the one I get at home in Massachusetts, as this one was a bit spicier and the sauce was not as creamy. However, when mixed with rice the dish became pristine. The chicken korma, on the other hand, was even better. It was rich and creamy, with a much sweeter tasting sauce than the tikka masala. Also, I liked how the rice was cooked—which may seem like a small thing—but it made all the difference. The side of garlic naan was a welcome addition to my meal. One order of naan consisted of four pieces, which is enough for two people. To end our meal, we were given a complimentary small cup of rice pudding, which was very well made and delicious.

For the delivery order, the aloo tikiyas were thick and flavorful, making a great appetizer. The order came with two of the potato cakes. The samosas came with two as well, and were also dense and delicious. They were the perfect amount of spicy and crispy without feeling oily. The chicken ceylon was super spicy. When we first opened the dish, it smelled sweet and coconutty, but one spoonful was enough to make both of us need a quick drink of water. However, the dish itself was extremely flavorful, just not made for those with a mild sense of taste. The chicken malai kabob was also great, with hints of lemon and cilantro. It was served as just chicken over some caramelized onions, with some cilantro on top and a wedge of lemon. This was easily the number one dish we tried at Minar—a perfect meal for those not looking for lots of spice.

During our second round with Minar, we were able to try out their delivery service, as well as some of their appetizers and a dessert. A huge plus about ordering delivery from Minar is that they don’t charge a delivery fee, which makes it just as easy as take out. We were able to order and get about 45 minutes of homework in before the food arrived, which is a little on the longer side for a wait time but is completely understandable considering it’s not fast food. Regrettably, as we ordered takeout and delivery, we weren’t able to experience the restaurant in its sit-down form. The interior seemed small but cozy, with about eight or so tables that were decently spaced apart. For any RPI student that wishes to go there, bring your student ID! They are currently giving a discount for students with an ID, which makes the place even more affordable. Overall, we really enjoyed this culinary adventure.