The Grand Marshal debate ran an hour long with alternating discussion between the candidates. The first question involved how each candidate would form a relationship with the new president. Bennett said her goal revolved around “visibility and education.” She explained how current president Shirley Ann Jackson did not feel like a “member of the community.” However, Bennett wants the opposite for incoming president Martin Schmidt; she plans on inviting him to student events so that he can understand RPI culture and be held accountable for trying to form a relationship with the student body. She also has a letter for the incoming president outlining the goals the Student Senate would like to see accomplished.

Gramenides also believes in strengthening the student body’s relationship with the president. She brought up how past presidents would talk to their students during hockey games, and ultimately wants to implement face-to-face conversations between Schmidt and the student body. She also hopes that administrators would come to more student government meetings to increase transparency. Gramenides said that if elected, she would adopt Bennett’s idea of a letter to the president.

Bennett and Gramenides were then asked what they believed was the most important issue facing Greek life. Bennett remarked that RPI’s policy on deferred approval, which prohibits Greek houses from recruiting first-years in the Fall semester, failed to engage the incoming class. Her reason was that most students formed friend groups by the Spring semester, which had a negative impact on the relationship between first-years and Greek houses. Gramenides agreed, adding that a possible solution would be to end deferment in the middle of the Fall semester, as this would still give Greek houses ample time to advertise.

The debate moved on to the topic of mental health. Candidates were asked how they would help students mitigate mental stress at RPI. Both Gramenides and Bennett agreed that the Institute needs more counselors and psychiatrists and observed the difficulties in scheduling an appointment. Gramenides provided a solution that involved a system to book appointments—a more convenient method in comparison to making a phone call. Bennett mentioned that during her term as Grand Marshal, proposing solutions to alleviate mental health problems was not easy. Instead, she believes the focus should be on individual problem-solving, with students helping other students.

Another question asked about the feasibility of returning to a student-run Union. Gramenides believes that it’s possible to bring back a student-run Union. One goal included reinstating the Executive Board in the process of hiring Union staff. Bennett agreed that it was “absolutely worthwhile,” but stressed the importance of making reasonable goals. As an example, she cited how the Student Senate gave feedback to administration regarding their Student Life Performance Plan, which directly changed where administration allocated their money and time. 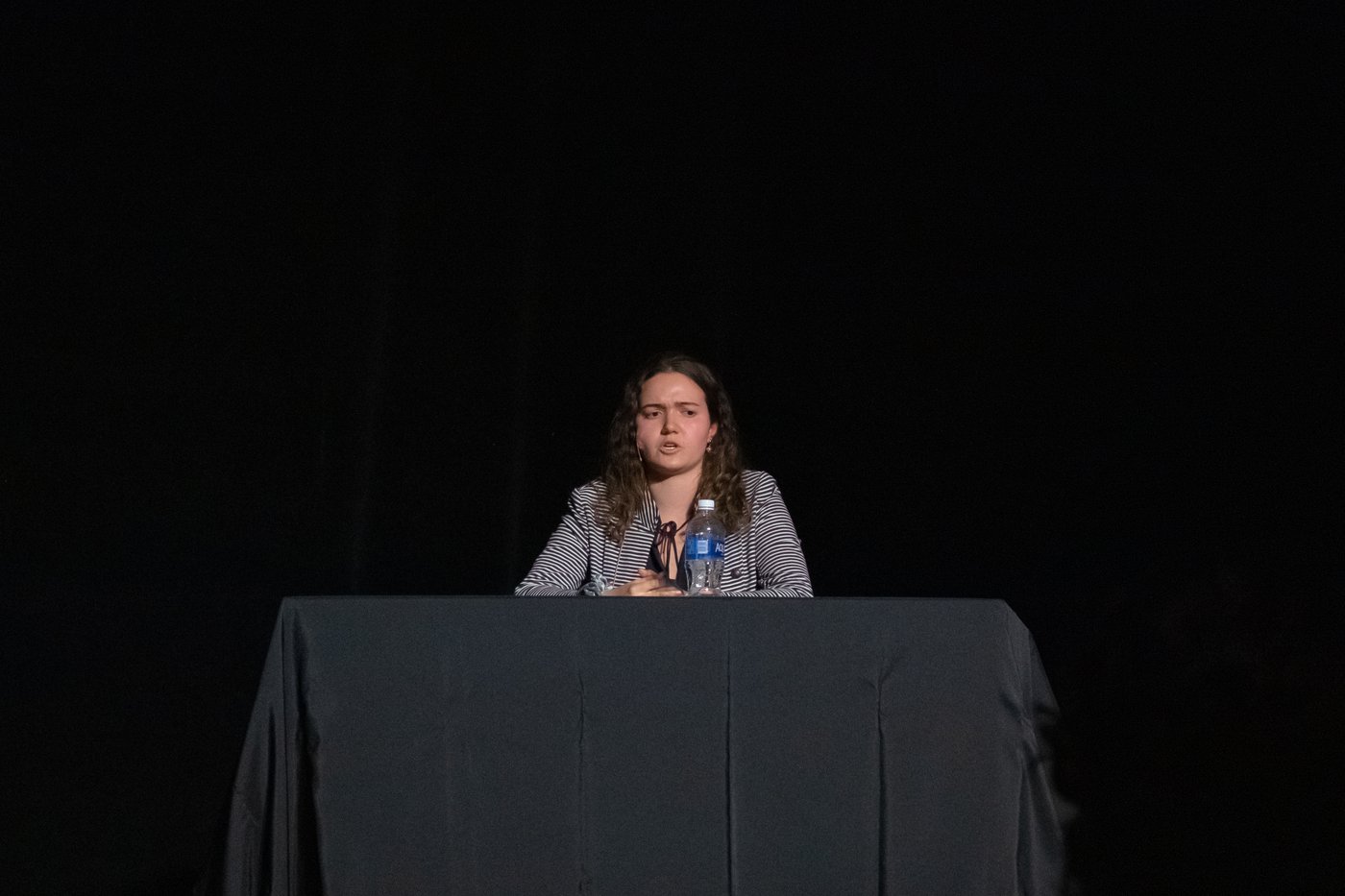 NICOLE GRAMENIDES '23 RESPONDS to a question during the debate. Theo Olinkiewicz/The Polytechnic

Gramenides was asked why the student body should trust her to fulfill her term as GM given that she had stepped down as Panhellenic Council senator prior to completing the term. Gramenides answered that her stepping down was not because she could not handle the position but that she was not satisfied with how the Senate was being run. Bennett retorted that she had not heard that about Gramenides at the time. Bennett emphasized the importance of being able to work within an organization that does not work for you. Gramenides responded that she had a lot going on at the time and needed time and space to deal with that. She apologized to Bennett for not making that clear at the time. Gramenides added that she continued to be involved in student government in other ways such as working on creating an Arch town hall.

During the debate, moderators brought up the issue of “all talk and no action” in the Student Senate. More specifically, the question asserted that the Senate had trouble making concrete decisions. Bennett replied that many actions happen outside of Senate meetings, so these actions need to be better communicated to the student body. Gramenides addressed her goal of bringing back constituency reports, which she hopes will hold Senators accountable to their promises. Bennett contested this point, arguing that constituency reports in the past led to no action. As an example, she alluded to years’ worth of Senate survey data that has not been acted upon.

A question from the audience asked why President of the Union Yaseen Mahmoud '22 endorsed Gramenides instead of Bennett. Bennett said that she and Mahmoud had “philosophical differences.” Yet Bennett further argued that Mahmoud shouldn’t have written an endorsement, since it would increase the perception that student government is influencing elections. Gramenides disagreed with this point. Gramenides believes people should be able to endorse whoever they want, citing freedom of speech as a principle, and likening it to national politics.

The final question for the GM candidates was what set them apart from their opponent. Gramenides acknowledged Bennett’s experience with the senate and position of Grand Marshal but highlighted her diverse record in other branches of student government including class council. Bennett acknowledged her role as previous Grand Marshal, but also said that her own goals were more achievable and that her ability to break down a problem into solvable chunks surpassed her opponent’s.

A debate was also held for the Undergraduate President candidate Ria Massoni-Nesman '24 and President of the Union candidate Colleen Corrigan '21.

In summary, Corrigan believed increasing club membership was her highest priority. Union self-governance was also an important topic, and she believes Schmidt will be more willing to compromise as he is an RPI graduate. In regards to Union facilities, Corrigan gave a positive review of late-night dining, a function that was canceled after COVID-19. However, she cautioned that there was more to bringing back late-night dining than COVID-19 restrictions, but will look into the logistics of the program if elected.

A question from the audience asked how Corrigan will support Greek life at RPI. Corrigan planned to bring in external facilitators that were vetted to fit campus culture. She believed “Phired Up,” the previous facilitators, did not understand the Institute and had a “one size fits all” ideal. Another question asked how Corrigan would support clubs over Summer Arch. Corrigan responded that each club had to decide if they wanted to operate over the summer semester, but it is possible to collect data from clubs and organizations to determine who needs support. Near the end of the Q&A session, moderators noted that Corrigan was campaigning with Gramenides. The follow-up asked how Corrigan would maintain a good relationship with the Senate if Bennett was elected Grand Marshal. Corrigan remarked that she worked with Bennett before and did not feel constrained. Ultimately, she believes that the Senate and Executive Board can function normally regardless of who wins the Grand Marshal position.

One of Massoni’s first questions was about how she would improve the freshman and sophomore class council. She answered by sharing her idea of a buddy system, where an underclassman on a class council would get paired up with an upperclassman on a class council to be there for assistance. Massoni was also asked her thoughts on spirit week and how to invigorate more spirit around campus around the year. To answer the former question, she said she hopes spirit week will be held every year. Furthermore, she wants to host more events year-round, and cites partnering with clubs as one way of achieving this goal. Massoni also proposed sharing resources between class councils to not only have more resources for a single event but to have a larger audience to share it with. Moreover, Massoni was asked about how she would fill all the empty positions on the class councils. She believes the issue lies in advertising: she hopes that reaching out to club leaders and making sure students know what the student government can do will entice more students to join.

Voting begins on Wednesday from 8 am to 5 pm. Physical polls will be available throughout campus; juniors will vote online through SimplyVoting due to a portion of their student body being on an away semester.

[Editor's Note]: A previous version of this article said Corrigan was campaigning with Massoni. This is incorrect as Corrigan campaigned with Gramenides. The Polytechnic apologizes for this error and any confusion that it caused.