This semester, the Rensselaer Handbook of Student Rights and Responsibilities was updated to include a section pertaining to “Acts of Bias, Discriminatory Behavior, and Harassment.” This change was incited by the Rensselaer Black and Latinx Student Coalition, after they realized there were no explicit disciplinary actions against acts of racism at Rensselaer in the Student Handbook. This change is directly applied to Disciplinary Action 18 of the Student Handbook, which cites “Discriminatory Harassment and Behavior” as grounds for disciplinary action.

Disciplinary Action 18 states that disciplinary action will be taken in the case of “Engaging in conduct (oral, written, graphic, or physical) that may harm, threaten, harass, demean, intimidate, or create a hostile environment for, any individual, or group of individuals, based upon that individual or group’s identity or category protected under Rensselaer’s policy on Non- Discrimination/Harassment Prevention/Equal Opportunity.” According to the Student Handbook in the Student Policy on Acts of Bias, Discriminatory, Behavior, and Harassment, this includes acts of “racism, colorism, sexism, and ableism.” This policy also protects against discrimination based on age, ethnicity, national origin, citizenship status, religion, gender identity, sexual orientation, pregnancy, disability, marital status, domestic violence victim status, familial status, genetic predisposition, and military or veteran status.

The Student Policy on Acts of Bias, Discriminatory, Behavior, and Harassment defines hate crimes as “all crimes motivated by the perpetrator's bias or attitude against an individual or group based on perceived or actual personal characteristics, such as their race, religion, ethnicity, gender, sexual orientation, disability, etc.” According to the policy, hate crimes should be reported to the Department of Public Safety of the Troy Police Department. Parallel to this, RPI may address if a direct violation of policy has occurred if the alleged incident falls within RPI’s jurisdiction.

The policy also defines microaggressions as “Subtle, verbal and non-verbal insults, indignities and denigrating messages, directed toward an individual(s) due to their marginalized identities.” This policy also differentiates acts of bias, as opposed to microaggressions, as “when the person committing the act does so with the intent to discriminate against, and/or is aware of the negative impact caused by their act or statement on, the individual(s) to whom it is directed.” Incident reports filed for microaggressions or other incidents will be/are to be assessed by the Bias Assessment and Response Team and will “provide support resources and educational opportunities to address the reported concerns with the involved parties.”

This change to the Handbook was put into motion after RBLX released a document last July outlining their requests to the RPI administration to “[transform] Rensselaer into a more inclusive, equitable, and safe environment for all students.” The first short-term goal listed was to “Reform the Rensselaer Handbook of Student Rights and Responsibilities to include ‘Racism’ or ‘Racist acts’ as grounds for disciplinary action.” The words “racism,” “sexism,” or “microaggression” do not appear in the previous version of the Student Handbook.

“RBLX has been working on this document since the first set of changes to the ‘Grounds for Disciplinary Actions’ in the Student Handbook,” wrote Marvin Rios ’21, a member of RBLX, in an email to The Polytechnic. “The document is a culmination of the feedback we had for that small but needed change from RPI this past summer. RBLX was the first to receive said document after meeting with Dean Travis Apgar, Assistant Dean Kristine Guzman, and Director of Judicial Affairs Adrianna Bradt.”

Bradt wrote to The Poly, “During the time in which the Institute received these requests, the Dean of Students Office was in process of reviewing the Handbook changes for the upcoming academic semester. These changes are typically reviewed in the Spring and Summer [months] for Fall semester revisions, and staff collaborate with the necessary student leaders and stakeholders to make and review updates to the Handbook.” Bradt and Guzman worked with RBLX to further develop and define the grounds for Disciplinary Action 18.

The Community Health Emergencies Statement was also updated to specifically include RPI students “living on or near the campus” and “any gathering, events or locations where members of the Rensselaer community attend” as being subject to this policy. If students fail to comply with these guidelines, they will be required to leave the campus and resume coursework online, which was clarified to be a “non-disciplinary action.”

In addition to these clarifications, the title “Emergency Suspension” was changed to “Interim Suspension” in Article VII: Procedural Standings in Disciplinary Proceedings Section E in the instance of a student’s suspension from the Institute following a written notification of disciplinary charges, and pending of a hearing. 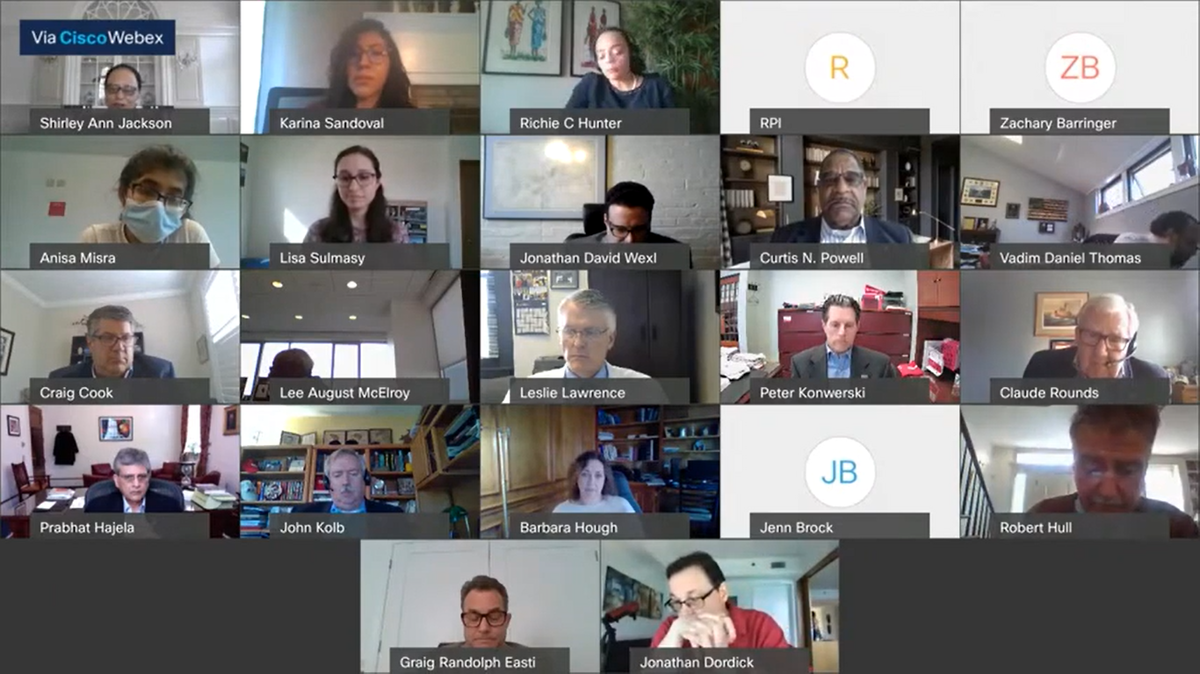