Posted on October 18, 2017 in Uncategorized by Brookelyn Parslow, Senior Reporter 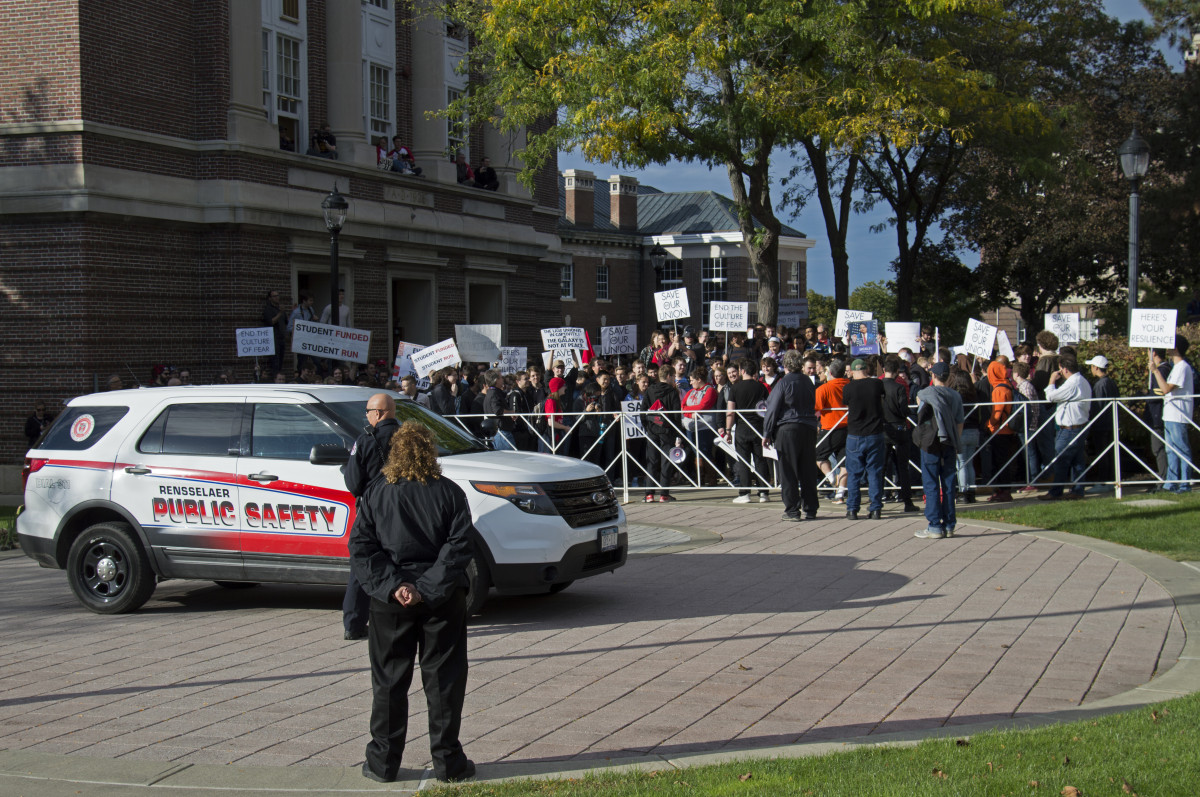 Brookelyn Parslow/The Polytechnic
RENSSELAER COMMUNITY MEMBERS PROTESTED behind event boundaries for only the first 30 minutes of the demonstration.

On Wednesday, October 11, Rensselaer erected a fence around the southwest side of campus. According to an email sent by Strategic Communications and External Relations on October 12, this “event boundary” was to ensure the welfare of event guests.

In an email to The Poly, Interim Vice President for Student Life LeNorman Strong wrote that “the use of security barriers is a current standard in event management.” He continued, “The event barrier was as minimal as it could be. Rensselaer determined that a more extensive separation of our student protesters from the event was not desirable. The culture of student expression at universities is an important aspect of student leadership, development, and a part of our community citizenship. At the same time, campus safety was, and is always, our first priority for our faculty, staff, students, and guests.”

Strong also expressed that, while Assistant Vice President and Dean of Students Travis Apgar invited the student who applied for the peaceful demonstration to meet and discuss alternatives, the student declined.

According to Strong, an alumni spokesperson was able to describe the intentions of the demonstration, but “was not able to discuss alternatives.”

Strong wrote that “The lack of dialogue between student event planners and staff in the Dean of Students Office only complicated matters. As a major advocate for students, the dean of students is a key resource who can help students determine a path for expressing issues important to them.”

However, there have been concerns that safety was not the administration’s primary motivation.

On October 9, the Foundation for Individual Rights in Education responded to Apgar’s denial to the application for peaceful demonstration. “Apgar’s denial letter is predicated on ‘a decision some time ago that [RPI] would not approve demonstration applications’ whatsoever during the homecoming weekend. That suggests that RPI’s motivation is not safety, but message—and that administrators are seeking to limit students’ ability to protest when their voices may be heard the loudest.”

On October 12, FIRE also published an article in response to the installation of the fence around campus, in which Senior Program Officer Adam Steinbaugh expressed that “Rensselaer promises its students the freedom to express their views. But, that promise apparently comes with a big asterisk: it doesn’t apply on some weekends, when it’s inconvenient, or when the university might be criticized in front of donors.”

Ultimately, the fence only kept the protest out of the restricted area for 30 minutes before it was moved by demonstrators. An email from Strategic Communications and External Relations said that the boundaries would be enforced by the Department of Public Safety, but no visible action was taken by the officers present to physically prevent the protest from moving.