Posted on October 11, 2017 in Uncategorized by Tyler Carney, Staff Reporter

On Saturday, October 7, a memo from the Human Resources Interview Committee Chairperson Michael Cuozzo ’18 that was addressed to members of the Rensselaer Union Executive Board was leaked on Reddit. In the memo, the Human Resources Interview Committee decided that it was unable to provide a recommendation for a director of the Union candidate to the E-Board.

The search for a new director was run through William Spelman Executive Search firm. Several thousand applications were recieved, of which William Spelman selected 50 that were given to RPI administration. The grand marshal and president of the Union gathered student feedback and forwarded that feedback to the Division of Human Resources to ensure candidates were chosen that aligned with student interests.

The memo states that, as far as the committee is aware, this feedback was never implemented into the HR’s scoring rubric, which is a tool used to rank the applicants. Assistant Vice President for Student Life and Dean of Students Travis Apgar and Interim Vice President for Student Life LeNorman Strong video interviewed five of the 50 applicants. Of those five, two were chosen and those two were the people interviewed by the committee.

The memo states, “At this point, students had not yet been included in any aspect of the formal hiring process.” No reasoning as to how these two were the selected candidates, or what happened to the other three that were video interviewed, was provided to the committee.

The committee at this point was given access to HR’s performance management tool which is used to determine how well a candidate aligns with the job description. The committee was alarmed with its contents, most notably “the director’s newfound budgeting authority and control in the direction of student government.”

Another point of contention was how the only reference to the Union being student-governed was found in quotation marks. Members of the committee believed that “they wanted the Union to be student-run in appearance only.”

At first, pre-approved questions were provided to the committee by HR, which could be modified. After some pushback, the members were allowed to submit their own questions. The two interviews were conducted during one-hour lunch sessions. Representatives from HR remained present during them, which “made it difficult, if not impossible, to comfortably speak with the candidates.” Furthermore, the representatives “were at times disruptive, interrupting questions and intentionally controlling the topics of discussion.”

At the time, the committee members thought HR attending was a normal process, but it was discovered after the interviews that, in the past, representatives were not present for search interviews involving students.

The committee also found that they needed more time to properly interview both candidates, and a request for a conference call was submitted. Vice President for Human Resources Curtis Powell denied this request.

To the committee, “it became clear that the RPI administration expected the committee to recommend both candidates.” Some members also felt as if they were “props” and only there so that HR could “tout student involvement” in the process.

Additionally, the committee had reservations regarding the applicants themselves—along with their answers to certain questions—and “whether or not there was an underlying administrative agenda due to so few candidates being presented, and a stark contrast in terms of experience and qualifications between the two.”

The memo states, in conclusion, that they were not able to recommend either of the candidates. They also recommended that the job description be amended, as well as the job duties in the performance management tool. Only after these issues are addressed, and their questions for the two applicants are answered, will they “deliver a detailed report of its findings and recommendations.”

The leaked Human Resources Interview Committee memorandum can be viewed below. 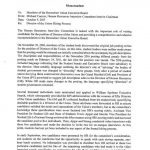 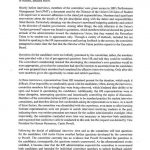 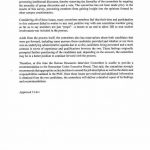