Posted on March 4, 2015 in Uncategorized by Rob Orban , Senior Reporter 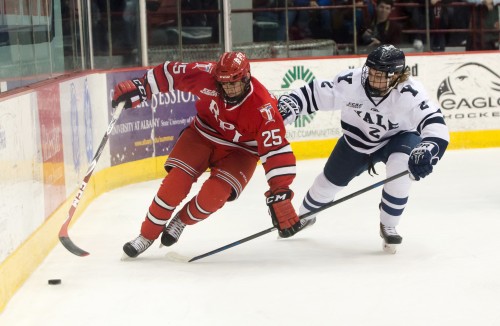 This past weekend was a solid outing for the Engineers by this season’s standards as they were able to tie the Clarkson Golden Knights 3-3 on Friday and defeated the St. Lawrence Saints 4-3 on Saturday. The Engineers looked strong in both action-packed games and built some momentum to head into the postseason.

On Friday, the Golden Knights came to the Houston Field House to take on the Engineers in front of a crowd 4,041 strong. The first period saw the majority of the game’s action, delivering five goals between the two teams. Rensselaer opened the scoring only 4:07 into the period as freshman forward Viktor Liljegren came around the net and found some space, burying one top shelf. He was set up by senior defender Luke Curadi and freshman defenseman Mike Prapavessis. Clarkson would answer back just under three minutes later on the power play to even the score, 1-1. The Golden Knights found their second goal of the night 13:17 into the period to take the lead by one. Less than a minute later, freshman forward Drew Melanson jammed home a rebound off of a play from junior forward Mark Miller and freshman forward Lou Nanne to even the score at 2 for the Engineers. The fifth goal of the period, and third for the Engineers, came off of a nice three-on-two rush set up by senior forward Jacob Laliberte, allowing senior forward Matt Neal to find the trailing man Mark McGowan, who beat the Clarkson goalie top shelf. The Engineers would head into the second period with a 3-2 lead.

An uneventful second period that saw no goals or penalties was only highlighted by a goaltender change for the Golden Knights to start the period. With Rensselaer still leading by a score of 3-2, the third period got under way. A tumultuous start to the period saw a couple of penalties arise off of a hit in the Clarkson zone leading to a prolonged Golden Knights power play. The Engineers were able to fend off the attack, and with 8:44 left to play, RPI seemed to have found a fourth goal. However, the goal was waved off and the score remained 3-2. Just two minutes later, Clarkson found its third goal to tie the game. The Knights took a penalty late in the period, presenting an opportunity for the Engineers to retake the lead, but Rensselaer was unable to capitalize and the game headed to overtime. The extra five minutes were an empty five minutes, and when the final horn sounded, the game ended in a 3-3 tie.

The Engineers played their second game of the weekend against the St. Lawrence Saints for Senior Night on Saturday. Senior goalie Scott Diebold got the start instead of usual starter Jason Kasdorf and was arguably the best Engineer on the ice. Early first period penalties against the Engineers led to numerous chances fended off by Diebold. Eventually, with under a minute to play, the Saints were able to put home a rebound on the power play to take the lead into the locker room for the first intermission.

The Engineers came out of the locker room and answered back quickly. Only 2:30 into the second period, McGowan found Prapavessis in the high slot, who beat the Saints goalie to score his first collegiate goal and tie the game. St. Lawrence continued to pepper Diebold with shots and took a 2-1 lead 5:01 into the period. The Saints looked to continue their momentum, but were stifled by Diebold, who made two acrobatic saves just before the midway point in the period. Moments later, freshman defender Bradley Bell gave Melanson a beautiful stretch pass up the middle of the ice to spring Melanson on a breakaway. Melanson made no mistake, tucking the puck between the goaltenders legs to tie the game at 2-2. The Saints would get their own breakaway chance moments later, but Diebold was able to come up big once more and keep the game tied. With eight minutes left in the period, the Saints were called for cross checking, giving the Engineers the man advantage. Rensselaer capitalized as Melanson tucked home his second goal of the night, banging a rebound into the twine. Less than a minute later, RPI would take a penalty of their, own giving St. Lawrence a power play. Twice, the Saints thought they took the lead, and twice Diebold was there to say no, sprawling across his crease to keep the puck out of the net. After a period filled with four goals and even more chances, the game headed to the third with the Engineers protecting a 3-2 lead.

After trading penalties early in the period, the game’s sixth goal would come 10:54 into the period as the Saints were able to pull even with the Engineers 3-3. A huge opportunity for the Engineers came about two minutes later as McGowan was tripped as he drove to the net on a breakaway. The referee raised his arms in an “x” above his head, signaling for a penalty shot. McGowan started in on his one-on-one with St. Lawrence goalie Kyle Hayton with speed and made a quick move right to left before blowing a shot past the Saints’ netminder, blocker side, to give the Engineers a 4-3 lead. McGowan would come up big again, though at the other end of the ice, as he cleared away a puck that laid in the crease in front of a wide open net. In the waning minutes of the game, St. Lawrence was forced to pull their goalie to try to find a game tying goal. Despite an onslaught of shots and bodies, Diebold was able to keep the puck out of the net. At the final buzzer, the score was 4-3 RPI.

Rensselaer finished the regular season 10-23-3 overall and 8-12-2 in conference play with 18 points giving them the 9th seed in the Eastern Collegiate Athletic Conference. The Engineers begin their playoff schedule by taking on the 8th seed Clarkson Golden Knights in a best-of-three series in Potsdam this weekend. The winner of that series will go on to play number 1 seed Quinnipiac in the quarterfinals on March 13–15.