Sci-fi series gets darker in Black Mirror | The Polytechnic

Posted on February 18, 2015 in Uncategorized by Chris Leong and Geoff Rosenthal, Senior Reviewers 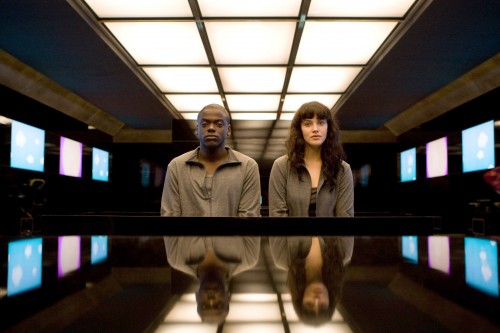 Courtesy of Channel 4
DISCONNECTED STORIES MAKE UP the series that is Black Mirror . This episode, “Fifteen Million Merits,” is a departure from the usual setting, taking place in a far off future where people must ride bicycles for electricity and are forced to watch televison.

While trying to write this review, I struggled to give a good synopsis of what Black Mirror is, or what it does well to earn a review. It’s not necessarily a new show, having started airing in 2011; though, as a British television show, it is new to America and was released on Netflix somewhat recently. As well, I could compare it to The Twilight Zone in that the show is made of separate stories of speculative fiction, but that would be doing Black Mirror an injustice, since it sets itself apart completely with gruesome and adult themes that you would never have seen in The Twilight Zone. I think the only fair comment I can make is that it is one of the most thought-provoking television series of recent years.

Made up of six hour-long episodes, spanning two seasons and a Christmas special, Black Mirror is by no means a long winded series, but, perhaps, in part because of the lessened amount of episodes, each one is poignant and evocative in different ways. The show comes from the mind of one man, Charlie Brooker, who created the show and either wrote or co-wrote all but one episode of the series. He chose the title Black Mirror to explore the space between the rewards and consequences of technology, specifically pointing out our phone or computer screens as black mirrors. And, on this front, he is absolutely correct. Each episode takes place either in our modern world and focuses on our current advancement, a near future like our world with a few specific advancements, or a wildly foreign future with mostly dystopian aspects. What I find so powerful about the show is the intense focus on the individual and how he or she is broken by society or the technology present in this world, even when that’s not its intended purpose. And though I don’t consider this a spoiler, I have to say that this show is extremely depressing. You will not find a happy ending at any point in this show, but that definitely works to its benefit.

I think one of the best aspects of the show is not only its replayability; myself and friends have rewatched episodes multiple times, but also the level of discussion and opinions that come from the show. While the most popular episode may be “The Entire History of You,” about a future where people have implants that allow them to replay and show others what they see, my personal favorite is “White Bear,” which is probably one of the least popular episodes. My friends also have different episodes that they are more drawn to. Having each episode contained as a separate story allows for more varied opinions and ideas presented for each portion.

I think it’s hard to express just how cool, interesting, and engaging each episode is on its own merits without showing someone the show, so all I can do is recommend watching it, but I would suggest starting on episode three of season one, “The Entire History of You,” not just because it is a popular episode, but because order doesn’t really matter and this episode is a better representation of the show than the first two episodes, which are also very good. This is the must watch show right now, and I doubt you’ll see a better science fiction show any time soon.

The first time I was exposed to Black Mirror was when I walked in on a few of my friends watching the Christmas episode. It seemed harmless; a British television show that had a cult following. Black Mirror sounds interesting, but probably not something I’d watch on my own. But, oh, I was so wrong. I took a seat and experienced the whole hour and 10 minutes of mind-bending madness. Since then, I’ve watched every single episode, some more than once.

I won’t give away any major plot spoilers, but Black Mirror portrays many technological situations that we, as a society, may be facing in the near future. Every episode creates an immersive world with personable, empathetic characters, ones that aren’t too far from reality. But the outlook isn’t necessarily positive. Love, loss, and pride are all felt and build over the course of each 45 minute installment. Then, towards the end, reminiscent of The Twilight Zone, the protagonist suffers an earth-shocking twist which invokes unexpected abject horror. As the credits roll, the viewer sees their trembling face reflected back in the black mirror that they watched the episode on.

After absorbing the contents of the Christmas special, I had to lie down on my bed in a fetal position and just let it all soak, for nearly a half hour. The next day, I also nearly cried during the first episode of the second season. I’m not one to get emotional with watching TV; I don’t cry when I watch sad movies (there is only one exception). But, Black Mirror put me in those characters’ shoes. It made me feel the loss of a loved one. It made me question the perspective of justice. It made me feel true, abhorrent dejection. Honestly, I’m not the same.

As a cynical person, this show hit home. Inherently, are humans good? When we develop the technology, will we do the right thing? Will we, will anyone understand the moral grey areas involved with our quickly advancing electronics? I’m not too sure, but one can always hope.