GM, PU candidates duke it out | The Polytechnic

GM, PU candidates duke it out

Posted on April 9, 2014 in Uncategorized by Elizabeth Anderson, Senior Reporter 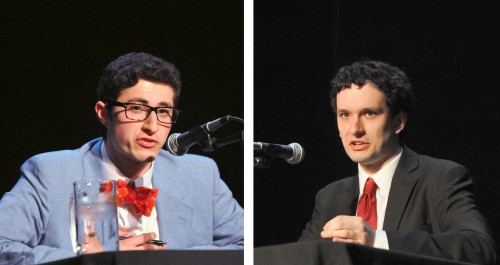 On Tuesday, April 8, the final debates for the positions of Grand Marshal and President of the Union were held. Following the primary on April 7, Kyle Keraga ’15 and Gavin Noritsky ’16 remain in the GM race. Keraga, Noritsky, and PU candidates Erin Amarello ’15 and Frank Abissi ’15 were asked questions regarding their plans if elected by members of the RPI Debate Club.

Noritsky and Keraga both opened with their platforms. They were then asked to name a specific way they planned to enhance the connection with the student body. Noritsky said he wants to bring senators and class representatives to the students. Keraga agreed that more outreach is needed and wants to make Senate accessible for those who don’t want to go out of their way. He plans to set up an appointment system for students to meet with senators.

Moderator Kitty VanderClute ’16, a member of the Debate Club, asked Noritsky to give specific examples because his platform was very vague. Noritsky explained that the vagueness was on purpose and not due to a lack of substance—he wants to stay flexible. He wants to revive events such as Hockey Line and keep students informed. Keraga countered by saying that communication was Noritsky’s entire platform, and to be aware that there is more to the GM role than just that. Keraga also noted that the issues he is talking about, such as Sodexo food, are longstanding concerns. Noritsky said that students know to give voice but don’t know what is going on unless they are in the Student Government Suite or read The Poly every week. VanderClute then asked Keraga about whether his goals were attainable in the time frame he’d have as GM. Keraga said he is fully prepared to begin working and that, while some issues may stretch beyond him, these issues matter to the student body and he wants to begin the conversation.

VanderClute next asked Keraga what he saw in the Senate that he felt had to change. Keraga said that this year’s Senate has been doing a great job. Not only have his Student Life Committee’s projects done well, but other committees’ projects, such as the car-sharing initiative, have also done well. He does feel that the Senate needs more transparency. Noritsky then pointed out that SLC’s 24 Senate and non-Senate members might have just been Keraga’s closest friends, to which Keraga replied that he’d met the students through reaching out in the Resident Student Association and Health Center advisory council. VanderClute then asked the candidates about task forces in Senate. Noritsky said that he wanted to connect with students, talk to them, and go to events they were performing. Keraga said he wants to move Senate projects beyond the Senate’s walls. He pointed out that he was operating on a managing level during this past year with three task forces, which worked well according to Keraga. He would go to students and ask them if they wanted to work on a specific project. If elected, Keraga plans to bring this model to Senate. Noritsky countered by stating that the whole reason he is running for GM is to bring in an outside view and get student input, which Keraga countered that he was prepared to do the same because he’s already been doing it.

Noritsky and Keraga were given a couple more questions, with the most back-and-forth happening on a question about what part of their opponent’s platform would make them want to work with them more in the future. Noritsky said that he would want to know how Keraga has gotten where he has. Keraga said he’d introduce Noritsky to working in Senate slowly, with Noritsky countering that “I don’t crawl, I take leaps.” Keraga said he loved Noritsky’s passion, but the GM role is one that demands respect and preparation. According to Keraga, there will be no learning curve for Keraga himself. Noritsky again stated that he’d been preparing since “day one” when he heard the then-GM speak to incoming students. Keraga explained that he felt the fun is not in the learning curve but in making change happen. Keraga said that he, too, has wanted to be GM since his freshman year and has since been preparing. Closing remarks were made by both candidates. Noritsky closed with “If you vote for me, you vote for change; If you vote for Kyle, you vote for Senate continuing.” Keraga countered that “a vote for me is a vote for change, and a vote for me is a vote for the one who is prepared to make that change happen.”

The PU candidates then debated, moderated by Victoria Butler ’15. After the PU candidates gave their platform, Butler asked them what set them apart from their opponent. Abissi said that these were two projects: his website, which would be like Kickstarter for clubs, and an improved events calendar. Amarello said that students need to be involved before anything else can happen. She said that she was on the committee that was working on the events calendar, but there weren’t enough people. Amarello also added that most club websites are out-of-date. Abissi countered that his ideas might be ambitious, but that he believes they are attainable and has already been working on some of them.

The candidates were asked about one large-scale change they planned to do. Amarello wanted to increase student involvement and voting turn-out. Abissi wants to create a programming committee in charge of the existing budget for large-scale music and arts events, rather than those events being run by the already-overworked Union staff. He wants this committee to be made up of students interested in the arts and entertainment, not Senators and Executive Board members.

Butler next asked the candidates their opinions on the food policy changes. Amarello said that the changes had a huge effect on some clubs, such as the Players, but a minimal effect on other clubs. Abissi said that exceptions should be made for clubs that dedicate a lot of time and service to RPI, such as media clubs. The candidates were also asked about budgets and the short deadline to submit appeals. Amarello said she planned to communicate major budgetary changes at least a month in advance, and that opinions from more than just the E-Board representatives should be considered. Abissi said that he would want a minimum of five business days for appeals. The candidates were then asked about their greatest accomplishment at RPI so far, which for Abissi was his Facilities and Services Committee project on the CDTA 286 route bus and media upgrades that will be happening this year to Union rooms. Amarello talked about Marketing, Advertising, and Publicity Club Officer Symposiums, which brought clubs together to talk about their projects.

After several other questions, the candidates made their closing statements. Abissi said that he came to RPI because of the student-run Union and clubs, such as the quidditch team, that might not be funded at other colleges. The students who formed the Quidditch Club pointed out to the E-Board that it was unique and would bring students who wouldn’t normally play a sport to leave their dorm room. Amarello said that she wants to represent the student body, and that a vote for her is for change and a new student voice.

Elections are on Thursday, April 10. Candidates’ platforms can be found at http://elections.union.rpi.edu/offices.