Posted on April 10, 2014 in Uncategorized by Poly Senior Board 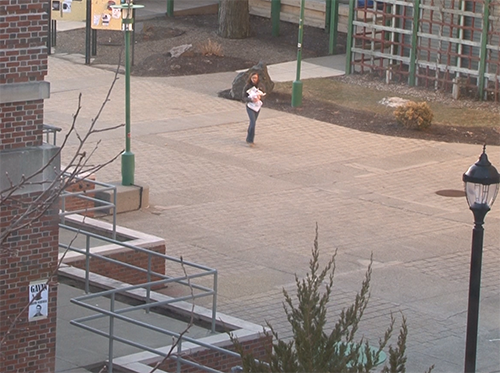 Courtesy of RPI TV
PRESIDENT OF THE UNION GRETCHEN SILEO ’14 IS RECORDED removing anti-amendment posters from the Center for Industrial Innovation plaza on April 10. Sileo, along with three other Student Government officials, allegedly took down nearly 1,000 posters across campus.
Update (5:30 pm, April 11)

Members of Student Government who appeared to be implicated by video evidence in the poster removal issue have released a joint statement. Submitted to The Poly on the afternoon of April 11, the full text reads:

There have been many questions and concerns regarding recent posts on the Internet where it was reported that some of us were seen removing posters regarding the proposed constitutional referendum. Regrettably, this has created an elections controversy. We want to apologize for the role we played in creating that issue. Our intent was neither malicious nor unlawful and we certainly did not touch any candidate signs.

However, in retrospect we now wish we had gone through another process and reported what we thought were violations of the sign policy.

We regret any effect this controversy has had on the elections process and apologize to the Rensselaer community.

As mentioned in an earlier update, the affected race results will be delayed until a ruling by the Judicial Board.

However, all other results appear to be on track for release around 6:30 pm this evening.

The Dean of Students Office has released an official statement on the recent GM Week postering incident. An email sent to The Poly echoed the Rules and Election Committee’s early morning decision, reading the following:

To the Rensselaer Community:

In light of recent events, the Rules and Elections Committee has reviewed information regarding the 2014 election and decided to defer decisions about the election to the student Judicial Board. The Judicial Board will convene to determine the process it will use in the investigation of allegations that may be construed as compromising the 2014 student election process and outcome.

Election results will be withheld by R&E for President of the Union, Class of 2014 Alumni Class Council, and Rensselaer Union Constitutional Amendment referendum. Results of other elections will be released as planned by the R&E.

As an institution, we honor the student process. DOSO will support the Judicial Board and Executive Board during the investigatory and decision-making process with the goal to resolve the situation by Monday, April 14. We intend to reach a satisfactory resolution to restore students’ faith and support in Rensselaer’s Student Government.

Students with questions or concerns should direct them to the Dean of Students Office, 276-6266 or email to smithm@rpi.edu.

Another decision from R&E states that all election results will be delayed until further notice.

The Poly reached out to the current Grand Marshal Chuck Carletta ’14, President of the Union Gretchen Sileo ’14, and Union Executive Board Vice Chairman Matt Kosman ’14, and former Grand Marshal Russell Brown ’14 for comment, but no responses were received.

On Thursday, April 10, Rules and Elections Committee Chairman Tim Breen ’14 was sent a letter discussing alleged tampering with campaign posters regarding the controversial amendments to the Rensselaer Union Constitution. The posters in question promoted a vote of no on said amendments in the elections held that day. Posters were apparently systematically removed across campus, though posters in a similar vein are permitted and present in accordance with the Grand Marshal Week Handbook extended campus signage policies.

In video footage obtained from RPI TV, those recorded removing signs include incumbent Grand Marshal Chuck Carletta ’14, President of the Union Gretchen Sileo ’14, and Executive Board Vice Chairman Matt Kosman ’14, and former Grand Marshal Russell Brown ’14. This footage can be found at http://poly.rpi.edu/72189. Many of the alleged perpetrators are also candidates for office this election season or candidate assistants to others.

The previously mentioned videos were shot between April 8 and 10 during an investigation launched by RPI TV following reports of suspicious activity. In the videos, the individuals in question can be clearly seen removing and subsequently destroying posters that did not appear to violate any election policy.

The exact motive for the poster removal is unclear. The proposed amendments to the Constitution sharply divided campus and campus leaders and included language making the director of the Union an officer of the Union, changing human resources and hiring procedures, and altering the makeup of the Executive Board. The posters in question strongly opposed the changes.

The actions committed by the alleged culprits could carry severe consequences, including punishment from R&E, removal from office, and even disciplinary action from the Dean of Students Office and Judicial Board. Beyond this, there are ethical questions that must be raised.

Additionally, it is uncertain what impact these events may have on the election that already occurred, the results of which are scheduled to be released April 11. There is a possibility that a new election will occur.

DOSO has also been informed and is beginning its own investigation and preliminary hearings. At the time of publication, neither R&E nor DOSO has issued a statement or response regarding the issue; this article will be updated as further information becomes available.