Twitch Plays Pokemon travels across the land | The Polytechnic

Posted on March 5, 2014 in Uncategorized by Geoff Rosenthal, Senior Reviewer 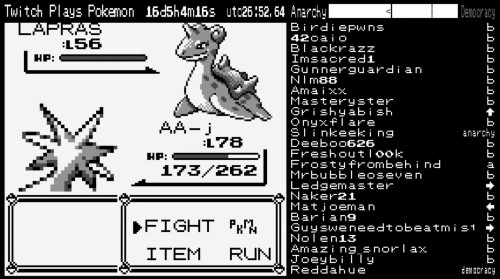 Last weekend, what I thought to be impossible happened. After more than 16 days, thousands of people playing a single game of Pokémon actually managed to beat it. For those of you who haven’t heard of this, which would be rather surprising at this school, Twitch Plays Pokemon is a streamed video of an emulator of the first Pokémon game. People in the video’s chat enters commands like left or right in order to dictate the avatar’s movement and actions. This sounds simple, but with thousands of people entering commands anything can happen.

And that’s exactly what it did. Twitch Plays Pokemon was more than a game. It was a special kind of social experiment. Analyzing some of the community from the outside through forums and the subreddit, it’s easy to infer that there is something truly inspiring and special about the Twitch Plays Pokemon experience. The journey has almost become a religious tale with its lore, how the holy Helix Fossil—an item that was accidentally accessed many times through the mass input—came to life by being regenerated into its true form, Lord Helix, otherwise known as the crustacean pokemon Omanyte. To anyone looking at the fan art or listening to the fans, I can say, straight faced, that it is all weird and kind of cult-y. But I think that’s the charm. The fact that nine million (yes, that’s correct, nine million) people watched, as more than a million of those people furiously typed commands for one, small, 8-bit character is crazy.

However, it’s hard to say what lasting influence this experience will have. Will people five years from now remember the martyrs Jay Leno and Abby? Or will it just be some dumb internet fad people will get over? To be honest, I’m unsure. Reading one of the posts in the TPP subreddit, it seems like this game was a very emotional journey. In this post by user 8bitremix, he recounts how growing up he never understood the Pokémon hype, and by joining in this experience he found a piece of his childhood that he did not know he missed. Through the subreddit, he’s actually become a live updater of the stream and has gained many friends through this experience.

I think, down the road, the fan art and silly lore will be forgotten, but as long as the stream made as deep an impact on just one person, as I read in their post, I look forward to watching the adventure of this new character in the next installment happening right now. If a million people working together can beat a Pokémon game, why can’t it change the people who play?