Posted on September 12, 2012 in Uncategorized by Kirk Smith, Senior Reporter 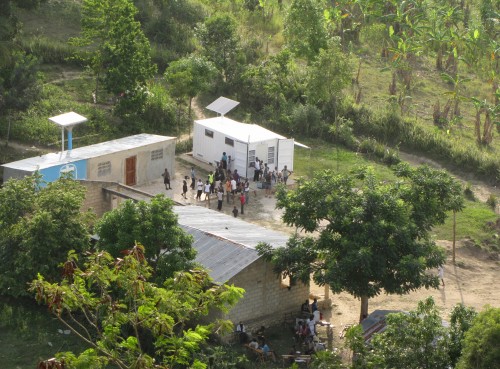 Courtesy of Andrew Chung
INHABITANTS OF RANTLAMOUAIE, HAITI, INSPECT the newly installed patient ward for their medical center. The project was sponsored by the non-profit organization To Love a Child.

During the summer, the RPI chapter of Engineers for a Sustainable World traveled to Haiti to install a patient ward, which had been designed and developed by students at the Institute. The project, which was sponsored by the Clifton Park-based non-profit organization To Love a Child, took place over several months, culminating in the final installation from August 7–14. The ward was created out of an old shipping container, which the students shaped into a habitable structure.

At the end of last semester, the team had planned to transport the ward as an extra living unit for an orphanage in Rantlamouaie, a remote village near the border between Haiti and the Dominican Republic. However, ESW member Andrew Chung ’13 explained that before they scheduled to the trip to Haiti, the orphanage that would have received the unit merged with another orphanage. As a result, the additional space was no longer needed. The decision was then made to turn the unit into a patient ward for a medical center in the same village.

Seven RPI students—Chung, Christopher Warmann ’14, foreign exchange student Daniel Noronha, David Hackett ’12, Dylan Martinez ’12, graduate student Margaret Exton ’12, and Nelson Lim ’12—as well as their faculty advisor Michael Jensen and director of To Love a Child Cindy Schmehl traveled on August 7 to Haiti. They were then joined by Edge Bagg, an individual who had assisted Schmehl with other projects for To Love a Child in the past. Chung expressed his concerns in regard to going through Haitian customs, having been the victim of corrupt customs agents two years prior; ESW students had attempted to take solar panels to the country, but customs confiscated the panels before the project could make any headway.

Chung stated that, after landing in Port-au-Prince, the team packed their belongings and all necessary equipment for the installation into a van and flatbed truck. Due to the lack of infrastructure in the country, the team was required to finish the journey on foot. Despite this, Chung and Warmann expressed their gratitude to the entire village population which assisted the team with transporting their belongings to the village. According to Chung, two families that lived in one of the houses in Rantlamouaie allowed the team to occupy their home for the week. “I don’t know how they slept. They must have been on tables or something,” said Chung. He added that many of the villagers functioned with very little sleep. “They had to be awake when we were,” he stated.

During the actual installation of the project, the team made efforts to get the community involved. Many of the villagers watched as the ward was set up. “It was a little nerve-wracking at first,” said Chung, “with so many people watching us all the time.” While some of the students were cutting out the windows for the new facility, several of the villagers helped paint the exterior of the container.

The team then set up several bunk beds and cribs. They also helped organize many of the medical supplies. Warmann also mentioned that wiring the ward took several days to complete. Many of the supplies and pieces of furniture were geared toward children, as per the focus of To Love a Child.

Once the patient ward was complete and installed, the team took time to interact with the villagers, particularly the children in the community. Chung mentioned that, despite being located in a remote area of Haiti, many of the children owned cell phones. Some also had Facebook accounts. Most of the computers and phones were supplied by support groups and non-profit organizations like To Love a Child.

ESW has also received a grant from the U.S. Environmental Protection Agency. The EPA’s “P3: People, Prosperity, and the Planet” grant was for $15,000. Chung explained that this funding was originally for the orphanage project, and that the RPI chapter of ESW applied for it during the 2011 fall semester.

He hopes that the EPA will allow for changes to the project. Their goal for the future is to keep the same basic premise for the orphanage project, but to increase the size of the container. Instead of an orphanage unit, the container would become a daycare center of sorts. Chung stated that in Rantlamouaie, parents are away to provide a livelihood for their families. This forces older children—who would be able to work in any other situation—to look after their younger siblings, which Chung referred to as “orphan children.” With a daycare center available, these “orphan children” would, essentially, be able to look after themselves, allowing the older children to work elsewhere. This would, the team hopes, eventually lead to more prosperous lives for the people of the Rantlamouaie community.