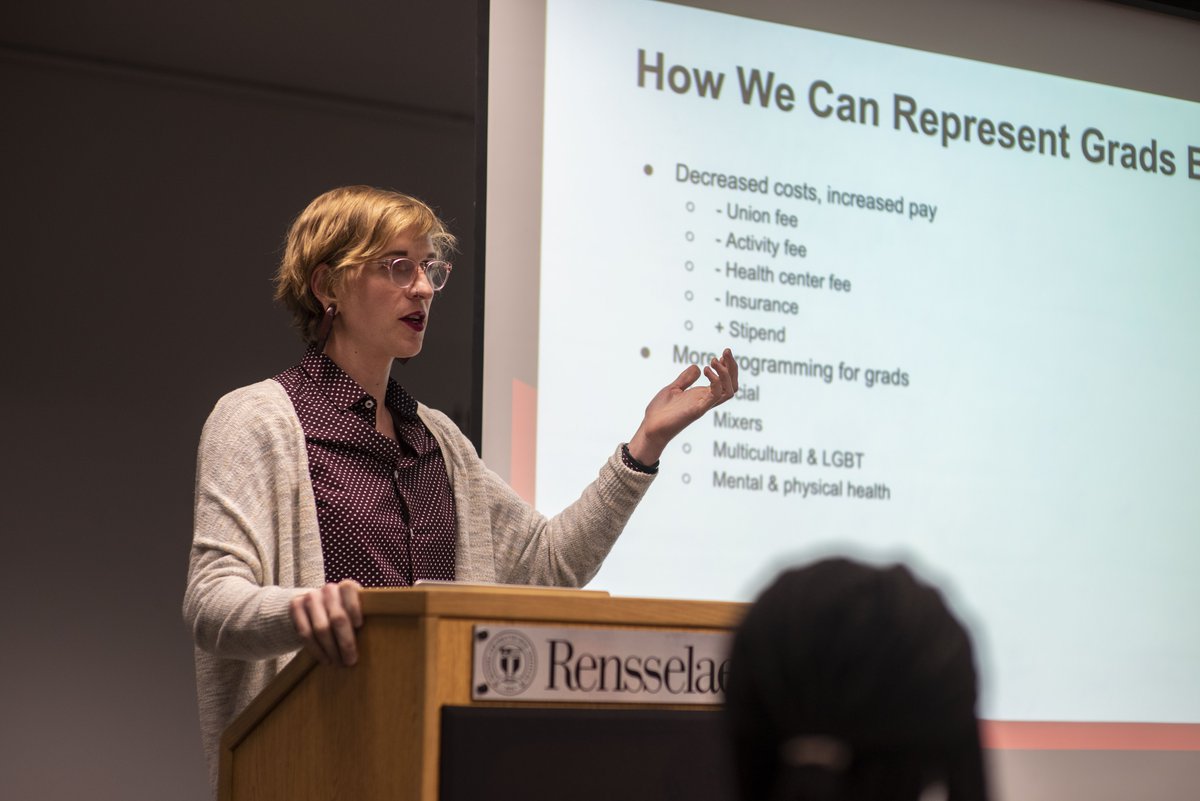 The Graduate Council identifies the problems affecting students the most by sending out an annual campus-wide survey, engaging with the rest of the student body on a daily basis, and via email: grad-council@rpi.edu.

According to the report, graduate students get paid $23,500 before taxes and fees. After taxes and fees are deducted, they take home less than $20,000. They claim they do not use the Union as much as undergraduates, so the graduate student population is upset about paying high activity fees.

When asked about the usage of the Union by graduate students, Beard responded in a later interview, saying that “graduate students, especially PhD students, have a significantly different lifestyle from undergrads.” She explained that their schedules, routines, and workloads are different. “We use the resources of the Union, but proportionally we use them less because we are on campus to work, rather than live,” she continued. Most graduate students have significant lives outside of RPI, such as families, children, relationships, and long-term research projects, explained Beard. This means that graduate students “simply have less time, energy, and motivation to take advantage of the resources and community offered by the union.”

Due to privacy laws, any data that is available about the usage of the Union by graduate students is limited.

The constituency report also outlined other issues that graduate students face, such as a lack of support from the Center for Career and Professional Development and toxic relationships with advisors. Beard added that in the case of rising tensions between a student and their advisor, the Office of Graduate Education, the dean of the graduate experience and the past graduate council have “worked closely to understand, document, and share information about how and when students should reach out if they feel a problem may be developing.” There is an ombudsperson—an official appointed to investigate individuals' complaints against maladministration—dedicated specifically to anonymously handling student-professor issues.

Another concern that was addressed in the constituency report was the state of support for international students, given that 50 percent of the graduate student population is international. Regarding this, Beard said, “International students, just like graduate students, have different experiences of RPI when compared to domestic students.” She attributes this to “the increased scrutiny that internationals face when applying,” traveling, language barriers, and “the specificity of American culture,” which she believes can create a “potentially-isolating combination of things.”

To begin to address these issues, Beard reiterated the idea that graduate students could pay Union activity fees based on usage rather than having a large fee to pay upfront. This has been discussed at length in the past and Beard said this may be something that the Graduate Council continues to pursue.

In addition to this, she called for more social support for graduate students, such as promoting social events that span all departments and collaboration between graduate students and the various multicultural and LGBTQ+ organizations on campus. Beard also suggested that the Office of Graduate Education should support the significant international graduate student population and try to “identify current issues, if any, and find ways to make the grad community more inviting and healthy for everyone.”

A previous version of this article incorrectly said that graduate students are paid less than $20,000. Graduate students are actually paid $23,500, but take home less than $20,000 after taxes and fees. A previous version of this article also incorrectly said that Beard proposed the idea of usage-based activity fees. She did discuss them as a possible solution, but this idea has previously existed in Student Government.