‘Build bridges, not fences’ | The Polytechnic

Despite RPI's denial of protest application, students made their voices heard outside Friday's capital campaign launch

Posted on October 18, 2017 in Uncategorized by Brookelyn Parslow, Senior Reporter 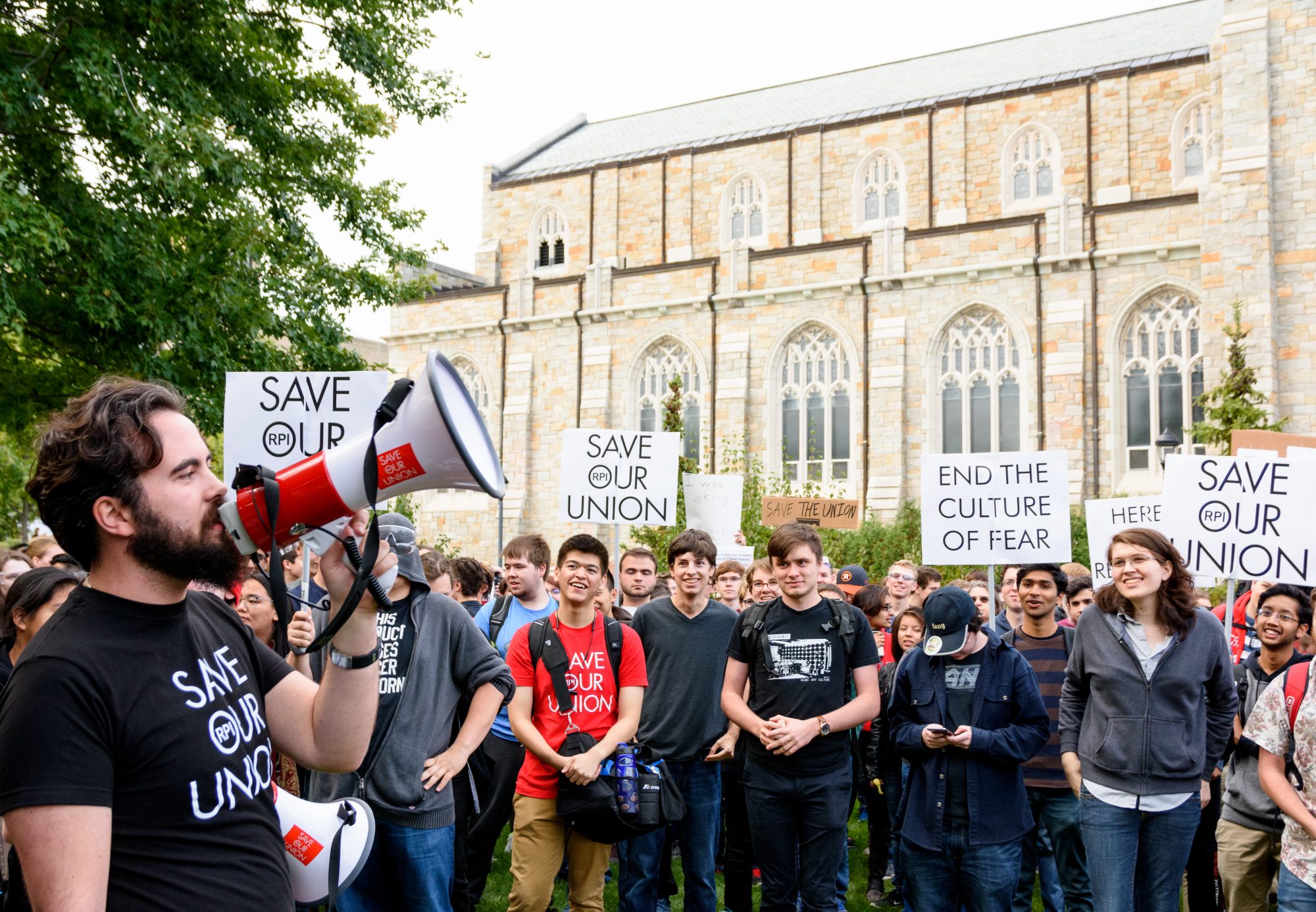 Sidney Kochman/The Polytechnic
PROTESTORS GATHERED, chanted, and spoke through a megaphone on the lawn south of the Voorhees Computing Center.

“We deserve transparency,” chanted students during a peaceful demonstration that began between Amos Eaton Hall and Lally Hall at 4 pm on Friday, October 13, 2017.

Earlier that day, the Save the Union organization emailed an invitation to the demonstration, or “lab safety class,” to the Rensselaer community. The intended message of the protest was that “the overwhelming majority of the RPI community wants the Rensselaer Union restored to a student-run entity.”

The protest originated outside of the fences enclosing the south side of campus. It was initially scheduled to take place next to the Experimental Media and Performing Arts Center, the location of the spring 2016 protest. However, temporary barriers erected by the Institute and entry restrictions enforced by the Department of Public Safety prevented demonstrators from reaching EMPAC.

According to an email from Strategic Communications and External Relations, these “event boundaries” were meant to “ensure safety” for the hundreds of various Reunion & Homecoming event guests; this also included the closing of the tunnel connecting the Jonsson Engineering Center and the Jonsson-Rowland Science Center.

Before the protest, Director of Public Safety Jerry Matthews asked reporters of The Poly to vacate the area inside the fence, saying that it was restricted to people with credentials from the Division of Institute Advancement.

The crowd later transitioned to the grass surrounding the walkway near EMPAC, where they continued to chant, display signs to alumni, and take turns speaking through a megaphone. Chants included phrases such as, “build bridges, not fences,” and “our Union, our voice.” Concerns raised by speakers covered “RPI’s demotion to a tier-two research institution,” the “steady increase of undergraduate tuition,” the “drop in RPI’s credit rating,” and the “weakening of the Faculty Senate.”

A boundary of police officers separated the protesters from alumni going from the Cogswell Laboratory and the Folsom Library to the capital campaign launch event at EMPAC.

The protest included both undergraduate and graduate students, along with alumni. “I think what students are doing is absolutely the right thing,” shared Ted Mirczak ’66. “I was here before there was a student union building…and it was in those early years that we taxed ourselves in order to build the Union…The thing that baffles some of us is: what went wrong? The students are doing nothing wrong. They’re running a fiscally sound operation, the Union is in good shape. Why would you want to say it needs administration?” he continued.

“Before we worry about student union governance, we need to worry about university governance—in particular, better transparency, and better accountability,” stated John Krob ’78.

Toward the end of the demonstration, Professor of Practice and former Vice President for Student Life Eddie Ade Knowles dedicated a song to students “in the spirit of this event,” and expressed that “we are very proud of our Union.”

The demonstration ended at 6:15 pm.