Posted on November 9, 2016 in Uncategorized by Sidney Kochman, Senior Reporter 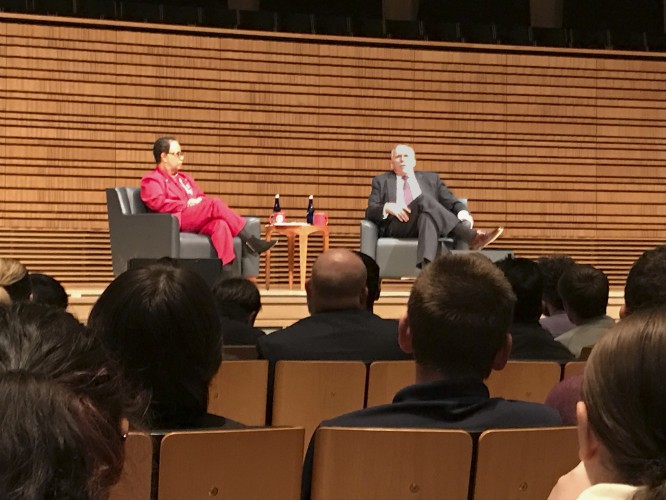 President Shirley Ann Jackson kicked off the event by naming some of the challenges that the world faces in the near future: food security, resource allocation, diseases, and the growing influence of non-state actors on the world stage.

She also pointed out vulnerabilities resulting from “cascading consequences” of complex, interconnected systems, giving the example of the Fukushima Daiichi nuclear disaster. Jackson explained that a tsunami caused power failures, and those failures led to nuclear meltdowns, which produced effects felt throughout the global economy.

After an introduction from Jackson, Brennan opened his remarks by saying that it is hard to find an institution more aligned with CIA goals than RPI. Brennan identified three forces of particular interest to him in today’s world: technology, global warming, and nationalism.

On technology, he pointed out that there is a lack of national consensus on how to deal with the vulnerabilities it creates. He is calling for a unified national response to this issue that safeguards privacy and civil liberties. On global warming, he named the displacement of people living in areas affected by rising sea levels and food insecurity as issues that he is paying attention to. On nationalism, he named a resurgently-aggressive Russia potentially causing a return to Cold War-era tensions.

As a recurring theme throughout his remarks, Brennan spoke about his efforts to modernize the CIA. He is pushing initiatives that aim to foster teamwork across disciplines, and has created a new Directorate of Digital Innovation to enable the CIA to operate more effectively in today’s world.

Jackson prompted Brennan with a question about ISIS’s internet activities. Brennan said that ISIS is digitally sophisticated and prolific, and an effective response to it will require a national consensus on exactly what the government’s role in the internet should be. He stressed the need to balance privacy with security, and that the government should be able to access information while providing for civil liberties. He doesn’t want to allow enemies of the United States to hurt the country by taking advantage of technological vulnerabilities.

In response to a question from Jackson about Islamic terrorism, Brennan said that he “admires” Islamic culture, society, and people. He added that groups such as ISIS are perverting the religion for their own reprehensible purposes. Brennan remarked that previous terror groups tended to have specific political objectives, whereas groups like ISIS and al-Qaeda have very broad goals and political objectives that aren’t well-scoped. He said that there is no room for these kinds of movements in the world.

Jackson asked Brennan about Secretary of State John Kerry’s call for a probe into Russian war crimes in Syria. “Russia frustrates me to no end,” said Brennan. He added that Russia has shown a disregard for laws of war and a lack of follow-through with agreements it has made. He contrasted the United States’ democratic leadership with President Vladimir Putin’s blind pursuit of Russian goals.

Brennan also talked about what he hopes the CIA will become. Using the example of the Arab Spring, he wants to enhance capabilities to use public data to gain insights into what is happening around the world. He said that such data can provide information that people in, for example, the Egyptian prime minister’s office or Egyptian military aren’t aware of. Jackson pointed out that RPI’s Social Cognitive Networks Academic Research Center’s research into social networks could play a role in analyzing social media data to find these trends.

On the recent distributed denial-of-service that targeted DNS provider Dyn and affected the availability of Amazon, GitHub, Reddit, Spotify, and many other high-profile web services, Brennan stressed that defense always lags behind offense. Brennan is especially concerned about nation-states and smaller groups that aim to undermine the public’s confidence in financial and other essential systems through deletion, destruction, and manipulation of existing databases. He added that the Russian and Chinese forces play by different rules than American forces on the internet.

Referencing “some disquiet” that has been voiced over RPI’s Summer Arch, Jackson asked Brennan what he gained from the time he spent abroad in Egypt and Indonesia. He said that experiencing diversity and people with different cultures, backgrounds, and religions was stimulating, and it helped him understand how things fit together.

Brennan then transitioned to questions from the audience. He said that some of the new global issues that he is paying attention to are biological agents, genetic editing, stratospheric aerosol injection, and added that technology is a double-edged sword.

When asked how Putin’s background as a KGB officer influences his actions as president, he said that it gives him cunning and shapes the way he looks at the world. He said that Putin sees global issues as “zero-sum” and that he has a “paranoia,” believing that the United States is trying to undermine him.

On Snowden’s release of classified information, Brennan said that he gave adversaries of the United States access to information that they shouldn’t have. However, Brennan defended whistleblowing through the appropriate channels as an important part of the way our country operates.

One of the last questioners asked Brennan if aliens are real. Brennan responded, “Yeah, probably,” before launching into an exploration of the statistical improbability of humans being alone in the universe.

Brennan concluded by saying that he is proud of the apolitical, professional nature of the CIA. He added that he’d like to see the level of political discourse in the country rise, and he wants to see more discussion of the issues.