Posted on November 2, 2016 in Uncategorized by Jack Wellhofer and Peter Gramenides, Senior Reporters 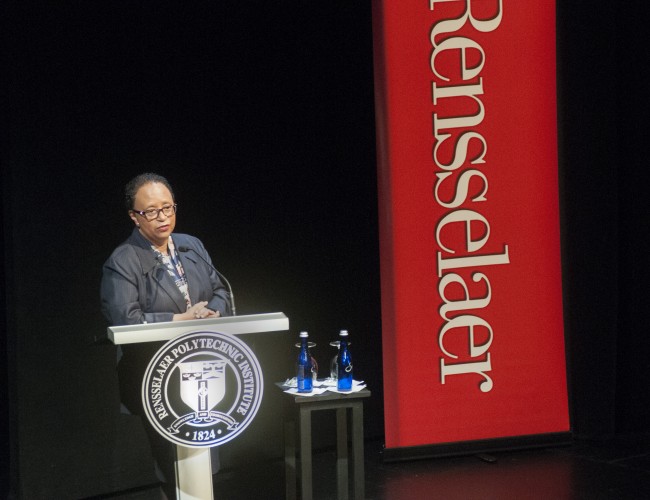 President Shirley Ann Jackson announced several key strategic initiatives during the Fall Town Meeting that will be culminated during the coming year while celebrating recent successes in institutional research and enrollment management.

Beginning her speech at Wednesday’s meeting, Jackson stated that “there is a great deal of evidence that the world appreciates the work we do here,” noting that Rensselaer intended to enroll only 1500 incoming freshman, yet welcomed 1691, and that the university’s ranking rose to 39th amongst national universities in the most recent edition of the U.S. News and World Report.

“We try to remain focused on outcomes,” Jackson continued, citing salaries of recent grads and graduate school acceptances as indicators of the “impact of research and teaching” at Rensselaer. “Those outcomes speak for themselves.”

Jackson remarked that the Institute’s finances are “fundamentally sound, with a stable market position and improved operating performance.” Further, Jackson cited the successful completion of a $1.4 billion capital campaign in 2008, continued improvement of existing facilities, and intent to continue expanding tenured and tenure-track faculty positions across the Institute.

Jackson also announced her intent to mount an expansive new capital campaign beginning in 2017 to accomplish the goals of the Rensselaer Plan 2024. She specifically named expansion of graduate enrollment to 2,500 students—including 1,600 doctoral students—pursuing novel research grants from federal and state sources, and expanding financial aid for undergraduate students as examples of what RPI aims to achieve.

In 2015, the minimum academic stipend for graduates was raised to $21,500 and the Institute began creating Presidential Graduate Research Fellowships. That same year, the resident graduate student population on Rensselaer’s campus stood at 1,109, requiring a 125 percent increase in total graduate enrollment to reach the goal outlined in the Rensselaer Plan 2024.

Jackson discussed the ongoing reorganization of Student Life as a part of her resolutions. Student Life will be divided into five subdivisions: student transitions, student success, campus experience, student support, and Clustered Learning, Advocacy, and Support for Students. This transition will be overseen by the assistant vice presidents appointed to each subdivision.

New changes under this reorganization also include the construction of a physical off-campus commons, a message-based system for requesting safe rides off-campus, new shuttle routes and extended hours, and the expansion of the shuttle service into downtown Troy.

Jackson then continued to discuss the positive impact of the Summer Arch program, saying that the initiative “will allow us to educate more students without straining our facilities,” indicating increased enrollment as a source of strain on the Institute’s resources. In addition, Jackson discussed the Summer Arch and its affect on campus Greek Life, stating that all juniors who participate in the pilot program will be required to live on campus, and that this will be a critical component of the initiative. Editor’s Note: See https://poly.rpi.edu/s/t13bm for more information about Greeks on campus for Summer Arch.

Jackson later concluded her speech with a discussion of interdisciplinary data literacy, the newly piloted EMPAC+ program, which allows students to sign up and receive free tickets to a majority of performances, and research being conducted through the Jefferson Project at Lake George. Data literacy, Jackson noted, will soon be required in all fields, and is currently being introduced into Rensselaer’s mathematics curriculum with the intent of creating a new data-driven approach to undergraduate mathematics.