Posted on December 2, 2015 in Uncategorized by Jack Wellhofer, Senior Reporter 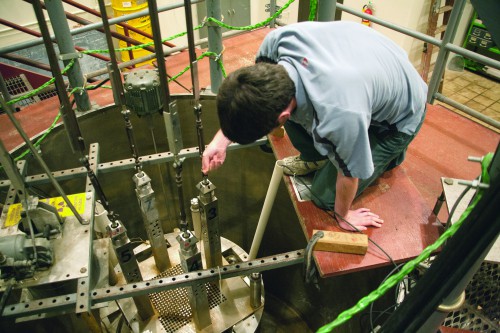 Dan Bruce/The Polytechnic
SENIOR REACTOR OPERATOR NICHOLAS THOMPSON REMOVES a fuel rod from the reactor core during a tour of the facility.

To a passerby, the white concrete box that sits on the banks of the Mohawk River in Schenectady, NY seems unremarkable. But, for many students interested in nuclear engineering at Rensselaer, it is one of the biggest draws to the school. Inside that building is the Walthousen Reactor Critical Facility, RPI’s very own nuclear reactor, used by students and faculty researchers alike.

Recently, Nicholas Thompson ’11, a Senior Reactor Operator at the RCF and nuclear engineering and science Ph.D. student, has been advocating for the reactor, fearing that the administration would make the decision to close the facility. Since May, a petition sponsored by Thompson garnered 393 signatures, and a motion was passed by the Senate 16-0-1 in favor of keeping the facility open.

The RCF was originally constructed by the American Locomotive Company in 1954 “for the purpose of entering the evolving niche market for small, portable reactor plants.” However, ALCO decided to exit the nuclear market in 1963, and RPI’s budding nuclear engineering program was given the reactor. The reactor is now one of only 25 nuclear reactors operated by universities in the United States.

The reactor currently serves the dual purpose of research and education. Recently, an $800,000 grant was given to the Mechanical, Aerospace, and Nuclear Engineering department from the Department of Energy to Professor and RCF Director Peter Caracappa for research on reactor behavior in accident conditions.

The RCF also provides valuable training for current students, both as undergraduates and graduates. According to U.S. News & World Report rankings and data compiled by the National Organization of Test, Research, and Training Reactors, seven of the top 10 ranked nuclear engineering graduate programs have nuclear reactors. For Rensselaer students, Critical Reactor Laboratory—a lab course where students use the RCF to perform experiments—is a required course for undergraduate nuclear engineers.

When The Poly visited the RCF, the graduate students working there explained that the RCF was key in their decision to come to RPI. “When I was a student looking at graduate programs, I asked if they had a reactor,” said PhD student Jason Senecal. “If not, I moved on.”

“Since it’s an extremely low power facility, we can make measurements very quickly, change core configurations, and perform experiments that other facilities would not be able to do,” explained Thompson. “Most university reactors do not have fuel similar to commercial nuclear fuel. This means that for some of the measurements we make, they are more applicable to commercial reactors than experiments at other universities.” This allows students to both create experiments that can be run in class and gain experience in operations similar to a  commercial facility.

The city of Schenectady has long been in favor of decommissioning the reactor. In an article by The Daily Gazette in 2011, Mayor Gary McCarthy said, “I am not sure that is the best place for that facility.”In another article in 2014, Mayor McCarthy said, “I want it decommissioned and taken off the site.”

The cost for the decommissioning of the facility is estimated at $444,000, all of which would need to be funded by Rensselaer. The Galesi Group, which owns the property around the reactor and is currently constructing a casino at the site, is unlikely to help offset the cost of potential decommissioning. Galesi Chief Operating Officer David Buicko said the reactor “will not be a problem. It has been there forever and no one has had any issues with it.”

At the President’s Fall Town Meeting on October 29, Thompson had the opportunity to ask President Shirley Ann Jackson about the facility. She explained that the Institute constantly evaluates “how many people actually use the facility against how much it costs us to operate and secure it;” if other, less resource-consuming options are available, it would be in RPI’s favor to pursue those options. Jackson noted that reactor operator licenses are not transferrable, to which Thompson told The Poly that the experience is useful nonetheless. Jackson also stated in her speech, “we don’t keep facilities open if they don’t have a broad utility and use against what they cost.” She concluded her statement by saying that Rensselaer will come to a decision point, “and it will be this year.”

In the coming months, the Institute will be making a decision. Closing the facility would save RPI the operating cost of the facility, roughly $41,000 in 2015. However, research grants would no longer be awarded to the facility and many nuclear engineering students, both undergraduate and graduate, would be deterred from attending Rensselaer by the lack of a reactor.

Whether or not the facility remains open is a decision for the Institute’s administration to make. Closing the RCF would be a terminating decision. It is unlikely that Rensselaer would be able to gain permission and funds for a new facility should the RCF close.