Posted on November 4, 2015 in Uncategorized by Elisabeth Ryan, Senior Reporter 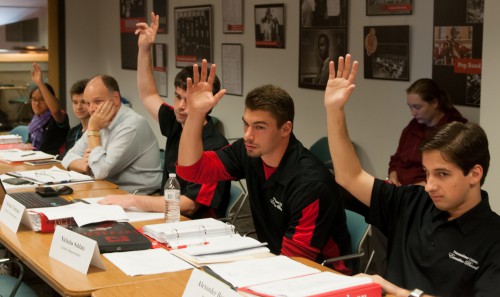 Jack Wellhofer/The Polytechnic
MEMBERS OF THE EXECUTIVE BOARD VOTED to recognize the Acoustical Society of America as a new club.

First year graduate students Erica Hoffman and Taylor Blaine presented to the Executive Board on Thursday, October 29, their plans to make Rensselaer a part of the Acoustical Society of America. Both of them are master students in acoustics and are looking to make RPI a nationally affiliated chapter of the ASA with the objective of establishing a forum for more undergraduates interested in acoustics to have a place to learn. Their long term goals include attending conferences put on twice a year by the ASA, touring local facilities, and having guest speakers come and lecture to the group. While the ASA is an acoustic centric organization, one doesn’t need to be an architectural acoustics major to join or attend conferences; one can be simply interested in acoustics to participate. With a 12-0-0 vote, the RPI Acoustical Society of America Chapter became recognized by the Rensselaer Union.

Vice president of Club Baseball Joseph DiBuonaventura ’18 returned with a detailed budget after meeting with a budgeting advisor in response to the request for a more detailed budget made by the E-board the week prior. After contacting the National Club Baseball Association, the members of RPI Club Baseball were able to determine how many home and away games they would be participating in and the total costs for each. The price of home games was concluded to be more expensive due to the price to pay umpires ($65 per umpire, with a requirement of two umpires per game). Home games total to $1170 and away games total to $960 if they go to Clarkson, the farthest distance to travel. The league fee of $1450, the one-time registration fee of $600, and the cost of new hats, $360, were all taken into account as well and a total of $4540 was budgeted for. DiBuonaventura requested of that sum $360, to cover the cost of new hats and that the club members had plans to fundraise and pay for the remaining amount. To his surprise, the $600 registration fee that the E-board had paid was not a loan and Club Baseball was not required to pay it back; along with that subsidization, the union would cover 40% of travel costs which total to $384. With a 13-0-0 vote, the E-board approved Club Baseball’s program on the condition that they submit their revised budget through the online budget management system.

President of RPI American Collegiate Hockey Association Teo Camadells ’16 and Vice President Adam Hennick ’16 appealed to the E-Board for new jerseys, socks, and uniform pant shells due to their apparent disrepair. The uniforms that club hockey currently possess are hand-me-downs from the varsity hockey team, with a sewn-on ACHA patch—the only portion of the jersey discerning the varsity from club. Camadells and Hennick mentioned the possibility of fundraising and reaching out to alumni who have donated in the past. The E-board suggested looking into WeR gold before requesting funds from the union, as it was a large quantity to subsidize and tabled the discussion for a future date.

Representing Colleges Against Cancer were President Chris Hoskins ’16, Vice President Madison Wyatt ’18, Advocacy Chair Kyle Neumann ’17, Relay For Life Co-Chair Keara Taylor ’17, and Relay For Life Co-Chair Torrie DeGennaro ’17. The Relay for Life Event is an annual charitable event that has, in previous years, been funded through various sources such as class councils, the American Cancer Society, Red and White, etc. No funding has ever come from the Rensselaer Union. However, Colleges Against Cancer is now requesting funds that would total up to $1,700. That sum would cover wood, dinner, paint, tables, stage rental, cardboard, relay decorations, and other miscellaneous expenses. This request of funds would not be a loan and would go purely towards the formation of the event. All proceeds made at the event would go to the ACS. The controversy with approving such a sum, is that it is not in the Executive Board’s policy to provide money to philanthropic organizations in that the E-board cannot fund events. The money that E-board distributes is meant to provide events for students. If they were to fund an event that requires ticketing then it would not have been an event provided for the students. The way this situation with Relay For Life differs from other charity events is that there is mandatory ticketing while others request donations. Motion to allot Colleges Against Cancer the sum they were looking for was denied in a 0-10-2 vote.

Senators Jenna Freedberg ’18 and Paul Ilori ’16 came before the E-board in search of funding for a project that would provide students with a free shuttle ride to Crossgates Mall and back. There was a pilot program last year, and the results were that the most popular time to leave campus was around 4 pm and the most popular time to return was 9 pm. After sending out a senate survey for 2014-2015, 60% said they’d use the shuttle option, which would be provided every other weekend, at least once a semester, and in another survey 67.5% said they would use it once a month. The dates for the remainder of the semester would be on 11/14, 12/12, and 12/18. Those three trips would total to a cost of $1725. The senators argued that even though it was a pricey sum to request, the program had been popular with students, especially underclassmen who don’t possess vehicles or a means to travel beyond the CDTA. In a close vote, the motion to fund this program was approved in a 7-6-0 vote.