Posted on February 11, 2015 in Uncategorized by Jack Wellhofer, Senior Reviewer 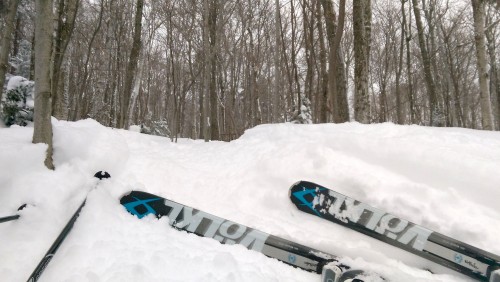 RPI Ski and Snowboard Club had their first trip of the new year on January 31, called “Snow Fiesta.” We traveled to Okemo Mountain Resort for what I hoped to be some amazing skiing. Since I grew up in the suburbs of Philadelphia, I was so excited to finally ski in Vermont again that I struggled to fall asleep the night before. My assigned departure time from the Armory was 6:45 am, after which we stopped at the Polytechnic Apartments, Blitman Commons, and the Houston Field House. I was very disappointed when we left the Field House nearly twenty-five minutes later than scheduled. It was still two hours to the mountain and I wanted to be skiing as soon as possible.

The travel time was further extended when I learned that the bus drivers were instructed not to go on a certain road that would get us to the mountain in two hours. I overheard someone say it was because there was a particularly steep section of road that would be far too dangerous for the heavy coach buses if it were icy. Instead, I was glued to my Google Maps application on my phone, desperately trying to figure out which way the buses were actually going. We ended up traveling north through Rutland before finally turning east and then south to the mountain. I was frustrated by the time we got there around 10 am, nearly two hours after Okemo opened.

We were given hand and toe warmers after getting off the bus to help combat the high winds and sub-zero temperatures. I’ve been skiing all my life so I know how to dress warmly to fight the cold, but nothing had prepared me for minus 25 degrees wind chills that somehow found their way through layers of fleece and my winter jacket.

Inside the lodge, it was evident that most people were not prepared for this weather either. The lodge was so packed that the only way to move around was to physically shove people out of the way. I needed to pick up my season pass at the customer service desk, and when I got there I found a line that snaked its way through the entire lodge. Fortunately, it was not the line I needed, but I felt extremely sorry for those families that were trying to refund their tickets after deciding the wind was too much.

I got on the slopes just before 11 am and immediately understood why half of the people at the mountain were in the refund line. But, I paid money to come on this trip and I was determined to not let this day go to waste. If I wasn’t completely in love with skiing, I would have changed my mind after the first lift ride. That ride was absolutely horrendous. Because of the wind, the chair had to run slower than normal, and made frequent stops because of people falling as they disembarked.

The highlight of the day was some advice I got from a ski patroller standing near a trail map. He advised me to take two lifts to the top, warm up in the summit lodge, and then stay in the trees as much as possible. The lift rides to the summit were almost unbearable, making me ski as fast as I could to the summit lodge. I used the hand warmers in the bathroom to heat up my boots so I wouldn’t lose my toes to frostbite.

The trees sheltered me from the wind and there was actually some good skiing to be found. It was demanding skiing; not for someone who skis only a few times a season, meaning not very many people could take advantage of it. The rest of the mountain was very difficult to ski because the high winds blew all the loose snow off and exposed the runs. The term “ice coast skiing,” a play on words with “east coast skiing,” was never more relevant. There were some trails that would have required ice skates rather than skis.

If I had known just how terrible the conditions would be, I probably would have taken a pass on Snow Fiesta. The wind and snow quality made the trip not worth it, even to me. Don’t let the Snow Fiesta experience discourage you from signing up for a Ski and Snowboard Club trip. I went to Killington Ski Resort this past Saturday and the difference from the previous weekend at Okemo was like night and day. Although the lift lines were sometimes long, the conditions were excellent and there was still fresh powder to be found in the trees on Ramshead and Snowshed peaks. The Killington trip more than made up the disaster that was Snow Fiesta.