Posted on April 30, 2014 in Uncategorized by Conrad Mossl, Senior Reporter 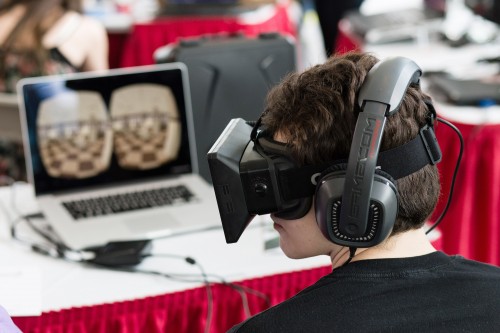 Photos courtesy of Kevin Chen
GAMEFEST ATTENDEES PLAY the games created by students from RPI and other nearby colleges. The event was held in EMPAC and was open to the community. GameFest also featured panels, performances, and presentations.

On Saturday, April 26, RPI was the host of the 10th annual GameFest, a showcase of video games from local colleges. While known best for showcasing student-developed games, GameFest is a conference for all of those in the gaming industry and welcomes their exchange of ideas and points of view on all aspects of the gaming community. This year’s event included panels, a student showcase, speakers, and a multimedia festival performed by PULSE.

This year, GameFest attracted more than its usual draw of young children and families, something which Coordinator and head of the Games and Simulation Arts and Sciences program Ben Chang was very happy to see. Even though the number of game conferences and fesitvals is growing worldwide, RPI’s GameFest remains the only one of its kind to be found in the Capital District. Even more specifically, large festivals rarely mimic GameFest’s concentration on student game designers from a mix of schools. While the event has not always been held in EMPAC, Chang finds the space ideal, especially since it can contain the massive amount of variation that the festival seems to bring every year. EMPAC proves to be able to hold not only the project as presented by the students, but also the many lectures, presentations, and performances that are included within the festival. GameFest expanded their repertoire this year with in depth conversations about the ways to increase immersion into virtual reality, such as increasing the amount of underrepresented female, ethnic minorities, and LGTBQ characters within games. Other attractions included the PULSE show which featured a mashup of Game Boy music, livecoding, analog syntheizers, and VJ’ing done on PowerPoint. This year’s keynote speaker was Leigh Alexander, editor-at-large for the game industry site, Gamasutra. She spoke about the industry’s increasing acceptance for diversity, invention, and creativity, all of which are tolerated at record high levels.

This year’s participating colleges included Rensselaer Polytechnic Institute, Rochester Institute of Technology, Champlain College and the New York University Game Center. Their games were presented into two different categories, those which were simply exhibited for the sake of showcasing the year’s work, and those which competed to win prizes. This latter category was judged by the experts from Vicarious Visions, a game development firm co-founded by Rensselaer alumnus Karthik Bala ’97. The games were categorized by those selected by the judges and “audience choices” of most innovative and best in show. The judges selected first, second, and third places for an overall best game as well as sub-categories for excellence in art direction, design, multi-player, puzzle innovation, and sensory experience. A RPI team made up of Damian Cross, Natalie Johnson, Jaron Kong, Jota San, Terence Tolman, and Greg Weil won first place with their game, Hangeki, a classic arcade space shooter. NYU Game Center’s games took both second and third place with the games Kaleiscope and Gemini, respectively. NYU also took prizes for excellence in puzzle innovation for Soft Body and excellence in multi-player for Field-1. RIT won for excellence in sensory experience and Champlain College’s SunBots won for excellence in art direction. RPI took prizes for excellence in design with Gravity Pull while Head in the Clouds and Lead with your Face won the audience’s picks for best in show and most innovative respectively. The overall winner, Hangeki, was a GSAS-developed project that was started in Fall 2012. The game was first thought up by Kong who was inspired by the classic game, Space Invaders. He decided to take the game to the next level by using fresh new graphics and sounds as well as implementing the Hangeki power-up, which annihilates all enemies after a certain percentage has already been defeated. Unlike its predecessor, Hangeki is more fast-paced and demands that the gamer be quick in both hand and mind.