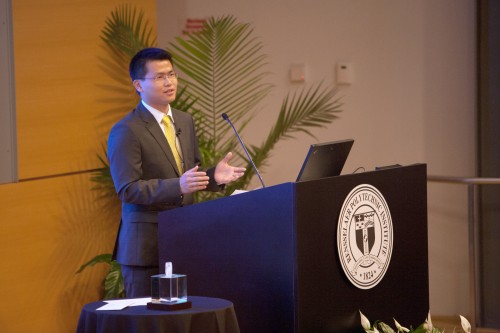 Rensselaer graduate student Ming Ma received the Lemelson-MIT Rensselaer student prize on Tuesday afternoon. The $30,000 prize recognizes Ma’s breakthrough research on Light Emitting Diode technology. Ma is the seventh recipient of the Lemelson-MIT Rensselaer award, which is presented annually to a senior or graduate student who produces a remarkable innovation in science, technology, or engineering. Rensselaer hosts the program yearly with the University of Illinois Champaign and the Massachusetts Institute of Technology, where the program began.

Ma’s LED research focuses on improving efficiency and uniformity of LED lighting. Current generation LEDs only output about 25 percent of the light they produce. The rest of the light is trapped and eventually converted to heat because the refractive properties of the LEDs surface. Ma’s innovation, which almost triples the amount of light output, was inspired from a naturally occurring phenomena in the earth’s atmosphere: graded refractivity. Rather than have a fixed refractive index, the atmosphere—and Ma’s LEDs—have a graded refractive index. This discrete gradient, five nanolayers of material each with decreasing refractive indexes, results in much less light being trapped in the LED. Additionally, Ma’s production process allows for much finer control over LED emission patterns. By molding the nanolayers like tiny star-shaped pillars, the LEDs can achieve a much wider radiation pattern, resulting in more even lighting in real world use. Ma’s GRIN LEDs “hold the promise of hastening the widespread adoption of LEDs, reducing the overall cost, energy consumption, and environmental impact of illuminating our homes and businesses.” Ma isn’t stopping now, however; he says he wants to continue “developing products that have a great impact on the whole of society.”

The other two finalists—graduate students Rebecca Wachs and Navid Attary, received $1,000 and $2,500 respectively for their innovations, through a donation from David Halwig ’72, and the School of Engineering. Attary designed a passive mechanical earthquake protection device that does not depend on power to function—a significant improvement since often times power is lost after the initial seismic wave. The device “dissipates the destructive forces of earthquakes and could help save countless lives and prevent billions of dollars of damage around the world every year.” Walchs invented “a new implantable sensor with the ability to wirelessly transmit data from the site of a knee replacement, spinal fusion, or other orthopedic surgery.”

The initial 13 applicants were judged by a panel of eight Rensselaer alumni with varied backgrounds: scientists, engineers, venture capitalists, entrepreneurs, a CEO, and a nobel laureate. The award presentation ceremony took place in the Center for Biotechnology and Interdisciplinary Studies auditorium. The school of Engineering, which organizes the competition, invited about 50 students from four high schools to get a taste of what engineering is about and to inspire them to pursue an education in the field of engineering, said Elizabeth Herkenham, Director of K-13 Outreach. The students were later given a tour of the campus.

The winners of the Illinois and MIT programs were also announced today: Nikolai Begg and Eduardo Torrealba, for a medical device and a smart water valve for plants respectively.

For more information, contact the Associate Dean for Research and Graduate Programs Tarek Abdoun at abdout@rpi.edu.