Posted on February 27, 2013 in Uncategorized by Sara Melikian, A Special to The Poly 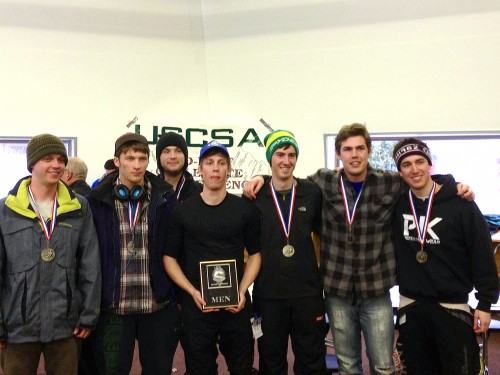 Courtesy of the RPI Ski Team
THE RPI MEN’S SKI TEAM STANDS triumphantly after their second-place finish at the Mideast Regional.

For the first time in school history, the men’s ski team at Rensselaer will be heading to the USCSA National Championship, to be held in Sun Valley, Idaho, in early March. Led by sophomore Paul Koetke, who represented RPI as an individual at the competition last winter, the team took one of two places granted to the Mideast Division for the national championship.

It wasn’t the start to the season as expected, as a warm winter led to more than just gate training. “The training trip was held at Gore Mountain, during the last week of winter break, but weather was warm and conditions were poor, which led to some T-shirt skiing and jibbin’ logs in the park after practice,” said senior architecture student and team president John Baker. Despite the dismal conditions for preseason training, however, the team was able to turn things around come the competitive season. The men’s team finished second at the season’s first race, held at Labrador Mountain, while the women’s team, who featured some new faces as well as some veterans, placed fifth overall.

The next weekend didn’t fare as well, as a couple of falls during the Giant Slalom at Bristol Mountain saw the men’s team place fourth overall. “This was an upsetting sign considering regionals would be held at Bristol in four weeks,” said Baker. Rensselaer regrouped for the next weekend, however, and came away with its first overall win after strong performances in the Slalom and Giant Slalom.

With a large winter storm looming over most of the eastern United States in mid-February, the team was only able to make one of two races at Gore Mountain, but made the most of the situation as senior Eoghan Sweeney won the Giant Slalom, with the rest of the men’s team finishing second overall. The final race of the season featured the annual costume race, with many different characters representing RPI before the Mideast Regional. “There were special appearances on the team from Thomas the Tank Engine, the Slippery Banana, Flyin’ Hawaiian, and the Neon-tight-wearing retro skiers,” said Baker.

Overall, the men’s team finished fourth in the Mideast region after the regular season, trailing Cornell University, Hamilton College, and Syracuse University. As seen in previous years, this made little impact come the regional competition. Due to some paperwork errors, only two teams from the region would qualify for the USCSA National Championships as opposed to the usual three for both the men and women.

The warm weather proved to be no problem for the men’s team, and despite a couple of falls, the group finished third overall in the Giant Slalom after Koetke won the race, and Kresser put up a strong performance to anchor the team. The next day saw Koetke finished first overall on the weekend after the Slalom, and earn his second individual bid in as many seasons. RPI would finish third and just outside of a national’s trip once again after the two races, but the official results would work in its favor. The third Syracuse skier was disqualified after missing a gate, and its fourth skier was also disqualified after straddling a gate. Despite some chatter from the Syracuse team, the officials ruled in RPI’s favor and put the team in second place, good for a spot to nationals. “RPI came in second for the day and second overall for the weekend ahead of Syracuse and behind the Cornell team that had a strong performance and many returning Nationals competitors,” said Baker.

RPI will head to Sun Valley in early March to represent the Mideast Region at the USCSA national championships. The team will have all week to train and will compete in the Giant Slalom on Wednesday, March 6, and the Slalom on Friday, March 8. A live stream of the races can be seen atâ€¨http://uscsa.com/miscellaneous/uscsa-broadcast-network/.