Baseball fights to exciting finish vs. Skidmore | The Polytechnic

Posted on May 2, 2012 in Uncategorized by Matthew Dawson , Senior Reporter 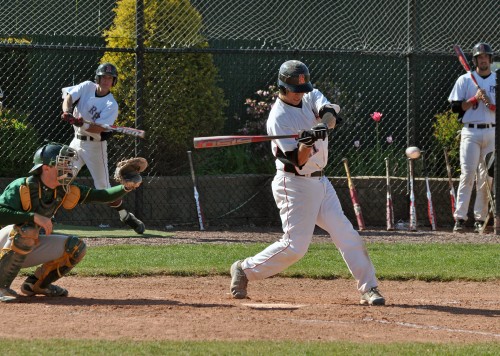 Ethan Spitz/The Polytechnic
JUNIOR TANNER BOUCHER BELTS the ball in RPI’s twinbill sweep of Skidmore College on Sunday at Robison Field. Boucher hit a walk-off two-run homer in the 10th inning of game two to give the Engineers the win.

Baseball started its week off with a game against non-league opponent Williams College. The Engineers fell behind early and entered the bottom of the fourth down 2-0. RPI then put runs on the board as senior Art Levenson and junior Kevin Prosicki collected RBIs, while senior Kyle Kopacz scored on a wild pitch. Williams tied the game up the next inning, but RPI responded in its half of the fifth as junior Tanner Boucher brought home senior Kyle LaVigne.

Williams then tacked on even more runs in the sixth as it made the game 5-4 in its favor. Once again RPI came back immediately; this time junior Jonny Rio’s single scored Kopacz to tie the game at five. The game remained tied until the ninth, where the Engineers surrendered the winning run due to a pair of errors as the game finished Williams 6, RPI 5.

Next up was a pair of doubleheaders against Skidmore College. The first game of the four started well for the Engineers, but they were unable to stop the Thoroughbreds’ comeback. In the first inning, LaVigne’s single scored Rio. After stealing second, LaVigne was brought home by a single from junior Chuck Erickson. Then in the fifth, Rio’s single scored Boucher to make it 3-0, RPI.

Skidmore began to add runs in the sixth as it put two runners across home plate. Then in the seventh, the Thoroughbreds scored another two runs. The Engineers started well, but were not able to close the game out. With no more runs scored, the game finished as a 4-3 loss for RPI.

Rensselaer completely dominated the second game of the day as senior Levi Washburn pitched a two-hitter and the Engineer bats exploded for 12 runs. RPI managed to score at least one run in each inning except for the third and seventh. LaVigne went 3-for-4 on the day with one RBI, while sophomore Andrew Kalish hit a three-run homerun in the fifth to make the game 8-0. When the dust settled, RPI walked away with a 12-0 victory.

The second doubleheader went extremely well for RPI as it came away with an exciting sweep. In the opener, Skidmore got on the board in the first frame, but the Engineers responded with a big inning in the second. RPI quickly loaded the bases and began batting in runs. Prosicki was hit by a pitch and scored sophomore Eric Kozak, and Kopacz’s sacrifice fly scored Erickson. Senior Cody Vincent’s single scored Kalish, Boucher’s single scored Prosicki, and Vincent scored on an error. Finally, LaVigne forced another error by Skidmore and Boucher crossed the plate to give RPI the 6-1 lead.

Skidmore once again put on a big comeback, eventually tying the game at seven-all in the fifth. The Engineers did not want to lose and quickly recaptured the lead through Vincent’s sacrifice fly, which would end up scoring Kalish. RPI finished scoring in the sixth as it added another three runs. First, a Kalish single brought home two, and then a Prosicki single added another. That would be all the Engineers needed as Skidmore was unable to attempt another comeback and the game finished RPI 11, Skidmore 7.

The finale was a thrilling display of resilience by RPI as it showed Skidmore how to complete a comeback. Straight away, Skidmore wanted to put everything out there to salvage a split in the series and it managed to score seven runs in the first inning alone. The game could have been over right then and there, but the Engineers fought back and scored five runs of their own in the inning. Unfortunately, Skidmore was able to put four more runs on the scoreboard and RPI entered the ninth down 11-5.

Immediately RPI loaded the bases as Prosicki, Kopacz, and Vincent all reached. Boucher was able to reach first after an error by the Skidmore second baseman to score Prosicki. Then LaVigne was able to reach and bring home Kopacz at the expense of Boucher, who was thrown out at second in the fielder’s choice. Kozak was hit by a pitch to reload the bases with the score 11-7, Skidmore. Then, Erickson stepped up to the plate and tied the game with one powerful swing as he launched the ball to right field for the game tying grand slam.

Unfortunately, the Engineers were unable to win in nine, so the game was stretched to extra innings. However, extra innings did not last long as Boucher finished a hard day’s work for the Engineers as he hit a two-run walk off home run to win the game.

This was a critical series for RPI as the Liberty League Tournament approaches. Rensselaer now is 16-8 in the League and is in second place in the standings, a half game back from first place St. Lawrence University and a game ahead of third place Skidmore. The Engineers will finish their regular season this upcoming weekend with a pair of doubleheaders against Vassar College on Saturday at Robison Field at 1 pm and on Sunday at Vassar at noon.