Posted on April 25, 2012 in Uncategorized by Kirk Smith, Senior Reporter 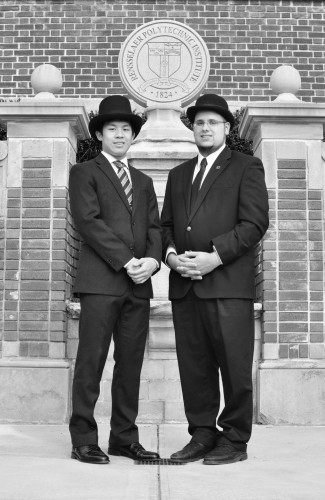 The events of Grand Marshal Week concluded on Saturday with the announcement of the winners of the Grand Marshal and President of the Union elections. Kevin Dai ’14 will be our next GM, while Jonathan Stack ’13 will be the PU.

Dai explained that his main priority for the last couple of weeks of this semester is to learn more about doing his job as well as building lines of communication. He said he will contact previous GMs, members of the faculty, administrators, and senators. Dai has already spoken with former GM Russell Brown ’14 about the position. Another task Dai will focus on for the duration of the semester is leading his first two Student Senate meetings. Having not held a Senate position before, Dai admits that he has had to rely on more experienced senators to assist him. He stated that the Senate also has to “set the framework” for the next academic year, as well as approve the next Student Handbook and appoint a tenured faculty member to the Faculty Senate. Dai will also work throughout the summer to make sure that the Senate “stays on track.” Dai added that, although he would have accepted either PU candidate, he is grateful that he will be able to rely on Stack’s experience if necessary.

Stack said that for the rest of the semester, he will be focusing on the last two Union Executive Board meetings, getting applications for the Board out to the student body, finalizing committees and their structure, and appointing new Board members. These new members will be selected by Stack and approved by the Senate during its last meeting of the semester. One of the two Executive Board meetings will be a transition meeting that will involve teaching new members how to perform their jobs. Stack said that, following this, the Board will then begin working on some of their larger projects, including the master planning process and upgrading facilities with new chairs and tables, among other things. He will work with the Board over the summer to make sure the situation is maintained. Next semester, Stack hopes that the Board will “start really strong” and work on projects such as the Activities Fair. He would have been comfortable with either GM candidate and stated that, with Dai as GM, there is “the potential to do quite a lot” and “bring their focus back to students.”

Class officers for each class were also elected, as well as members of class councils. Voter turnout was the highest it has been in over a decade at 49.8 percent. More than half of the undergraduate student body voted, but only about 25 percent of graduates did so. The GM election was determined by only 13 votes. Chair of the Senate Rules and Elections Committee Reilly Hamilton ’12 said that it was the closest he could remember. The PU election was also close; Stack won by 67 votes. The Class of 2014 again had the highest turnout with 64.2 percent of their class having voted. However, many positions had fewer than the maximum number of candidates run, meaning that the positions were filled by write-in candidates. Of note was the eight-way tie for the Class of 2013 Independent Council, each having received two votes.

Hamilton explained that, due to the close GM race, there was a triple hand-count. Following the first count, the difference in votes was outside their 5 percent margin of error, so they counted again. The second count gave a similar result, and the member of the Rules and Elections Committee were “uncomfortable” releasing the results without a third count. After this count, though, the numbers remained the same, so it was decided that the results were correct. Hamilton added that this is not an overly uncommon occurrence; it happened during the 2010 GM Week. He estimated that the counting process took a total of 24 hours, resulting in approximately 150 man-hours.

The Moose, Hamilton added, did worse than last year. There were also fewer instances of multiple ballots from the same person; there were about 105 last year but only approximately 75 this year. The Rules and Elections Committee received 3069 valid ballots and only about 500 blank extra ballots.

Hamilton said that, while the election process was smooth, there were five policy violations. The first was the result of an e-mail distributed by Dai that solicited votes from the student body. The second was because candidates kept posters up longer than they were supposed to. Hamilton mentioned that, while this did not affect the election results, it was an inconvenience to the Rules and Elections Committee. The third violation resulted in both Brandon Win ’15 and Abraham Can ’15—president and vice president of the Class of 2015, respectively—losing their postering privileges for failing to comply with postering rules. The fourth led to Maureen Ezeude ’14 dropping from the ballot because she received nominations which were not solicited in person. The fifth and last violation involved Caitlin Blackburn ’14 for “abus[ing] the process of the Rensselaer Union Student Government Elections.” She was removed from all ballots and determined ineligible to hold office this term.

Hamilton also approved of the activities occurring in the Center for Industrial Engineering plaza, including participation by Phalanx, the Center Career and Professional Development, and other groups. He said that GM Week traditions were “picking back up,” and he “hoped to see them for years to come.”