Three rounds of voting determine leadership for remainder of semester

Posted on February 8, 2012 in Uncategorized by David Hodson, Senior Reporter 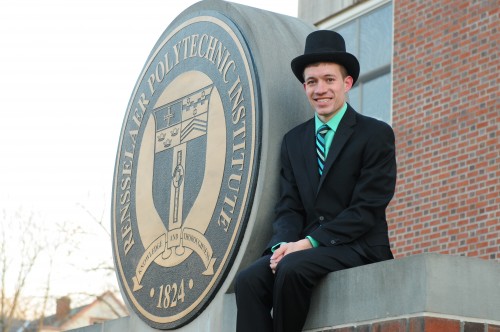 Ryan Baltazar/The Polytechnic
THE NEWLY APPOINTED GM, RUSSELL BROWN ’14, SITS next to the RPI seal wearing the traditional top hat of his position.

The 42nd Student Senate met this past Monday to elect a new Grand Marshal; the former Grand Marshal Lee Sharma, is no longer a student at RPI as of the beginning of this semester, and an interim GM was needed to bridge the time between now and the upcoming GM elections to be held the week of April 8.

There are very few precedents in RPI’s readily available history of GMs having to be replaced mid-term, the last of which occurred during the 80s. The process for electing a new GM mid-term is to have a closed election where the public may attend but only Senate members may vote. The Student Senate then has a series of speeches by the candidates and votes on which candidates seem best, slowly eliminating the candidates down to one. Once this one candidate is found, there is a vote of confidence in the candidate to finally see whether or not the Senate is willing to accept the GM candidate. Of all of these votes, only the final vote must be won by a two-thirds majority; every other vote is won by a simple majority.

Five names were put forward at the meeting’s beginning for candidacy; one, Reilly Hamilton ’12, immediately declined, another was not a senate member, and therefore was ineligible, and the remaining three were Russell Brown ’14, Andrew Labunka ’13, and Paul O’Neil ’14.

Russell Brown began the round of speeches by talking about his experience in the Senate and his interest in student government in general. He talked about his accomplishments as the chair of the Senate Communications Committee, and his experience with RPI’s club system. He brought up that he is a good communicator and that he is very organized, and stated that he has “good relations with the administration, not perfect, but good.”

Labunka’s speech followed Brown’s, and began with Labunka talking about where he was in school at the moment. He stated that he would be graduating in May, and therefore could only be GM in this interim period. He also spoke of his experience in the Senate, saying that he had been in the Senate for two years and had first joined in an effort to make a difference on campus. Since then, he has been the chair of the Academic Affairs Committee. Labunka claimed that if elected he intended to better structure committees, and to better structure and schedule the Senate in general. He would work toward improving the Senate’s meetings, fill vacancies in the Senate roster, and finally to improve/streamline the Senate liaison network.

The speeches were followed by a short round of questions. The first question was about last semester’s recommendation for the reorganization or replacement of President Shirley Ann Jackson, and what each candidate thought of it. Brown responded that he thought the report the motion was based off of was a good idea, but that he did not like that the report was not voted on by the general Student Senate, and the Senate at large had no approval or deniability when it came to it. Brown went on to say that he thought it was rushed, and that the Senate did not have all of their work completed before they were forced to go public, as well as not having enough or high enough quality communication between the Senate internally and their constituents. Labunka said that he felt that the report was created to justify a group of ideas, and not the other way around as it should have been. He also felt that the Senate was very rushed throughout the whole process, and that the students and the Senate were all not well enough informed about the entire deal. O’Neil responded by saying he was part of the committee that made the report the motion and he felt the entire process was very rushed, and that there were definitely portions of the report that were not ready for publication when it was released. He mentioned that he thought communication surrounding the report was awful, and that everything about the way the Senate handled the issue was rushed.

The second major question was about how each of the candidates was connected to the Alliance for Responsible Government. Brown said that he was briefly a part of ARG, but had since left the organization. Labunka stated that he was involved at the starting of ARG, and that he was initially a part of it but over time their agenda no longer reflected the opinion of the majority of students, and as a result of that he left. O’Neil said that he initially joined ARG because he thought that they were an involved and interested group of students that he might be able to bring into the Senate, but when he went to the meetings he saw they could use his help with publicity and data collection; despite this, he “did not get in on a personal level.”

Following this round of questioning was the first round of voting, during which Labunka received 10 votes, Brown received nine votes, and O’Neil received two votes, with one senator abstaining. With this vote, O’Neil was eliminated and there were a few more minor questions. Another round of voting took place between Brown and Labunka, which Brown won 12–10. After this vote, there was a final vote of confidence in Brown, which he won 19 to three with no abstentions. These votes made Russell Brown officially the Grand Marshal for the interim period between now and the installation of the next GM after the elections the week of April 8.