Posted on October 19, 2011 in Uncategorized by Matthew Dawson, Senior Reporter 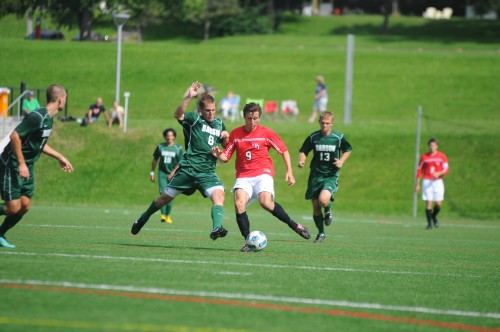 Ryan Baltazar/The Polytechnic
JUNIOR MIDFIELDER JAKE TONKEL BOOTS the ball during a game earlier this season. The Engineers take on the Skidmore College Thoroughbreds this evening in Saratoga Springs.

On Friday, men’s soccer headed to Clarkson University on a four-game winless streak and were eager to change that against the 4-7-1 Golden Knights. Since the team’s victory against the Massachusetts College of Liberal Arts, the Engineers have tied two games and lost another two, all against Liberty League opponents.

The first half was low on excitement, but showed promise for the Engineers’ attack and defense. RPI managed three shots—all on target and saved by Golden Knights junior keeper Saverino Spagnolo—and won two corner kicks. The defense was lights out, only allowing two off-target shots and no corner kicks.

Rensselaer continued its momentum into the second half with seven more shots. However, like the first half, neither team was able to muster up a solid chance until the Engineers got on the score sheet in the 81st minute.

Sophomore Will Mignon was able to break through and send a superb cross into the box. Freshman Matt Koziol had made a run and was able to head the ball into the back of the net, breaking the deadlock. This was Koziol’s team-leading fifth goal of the season.

Rensselaer would conclude the game with the shutout as freshman goalie Rob Dewald finished with one save. The win brought RPI to a record of 5-3-3 (1-2-2 Liberty League) while Clarkson dropped to 4-8-1 (2-3-0).

The next day RPI hoped to get the same result against No 1 St. Lawrence University. However, the Saints were hoping to not only remain undefeated but also to remain as the best team in the country as they rolled to a 1-0 victory.

The Engineers started very brightly in the first half, creating many more chances than their opponents. In the 12th minute, junior co-captain Adam Updegrove hit a shot from outside the 18 yard box that smashed against the post. The rebound was fired back onto the goal but saved by St. Lawrence senior goalkeeper Brian Abernethy. When the first 20 minutes had passed, RPI had already managed five shots while St. Lawrence had only one.

After the break, Abernethy made another spectacular save to keep the game scoreless. Sophomore Engineer Alex Dotseth crossed the ball toward senior co-captain Brad Shelofsky only to see Abernethy’s quick reflexes keep the ball out of the net.

In the 54th minute, St. Lawrence junior Brian Gilloran made an impressive run into the box and passed the ball in front of the goal. Freshman Jamal Samaroo was on hand to finish the chance and put the Saints on top 1-0.

The Engineers could not break down St. Lawrence’s defense, and when they could, Abernethy was on hand as he finished with five saves. RPI put in an excellent performance, but the game finished with just the one goal scored.

St. Lawrence moved to 13-0-0 (6-0-0 Liberty League) while RPI becomes 5-4-3 (1-3-2). The Engineers created many scoring chances throughout these two games as well as putting on solid defensive performances. They hope to continue this thread when they play at Skidmore College today at 7 pm and at Bard College on Saturday at 2 pm.