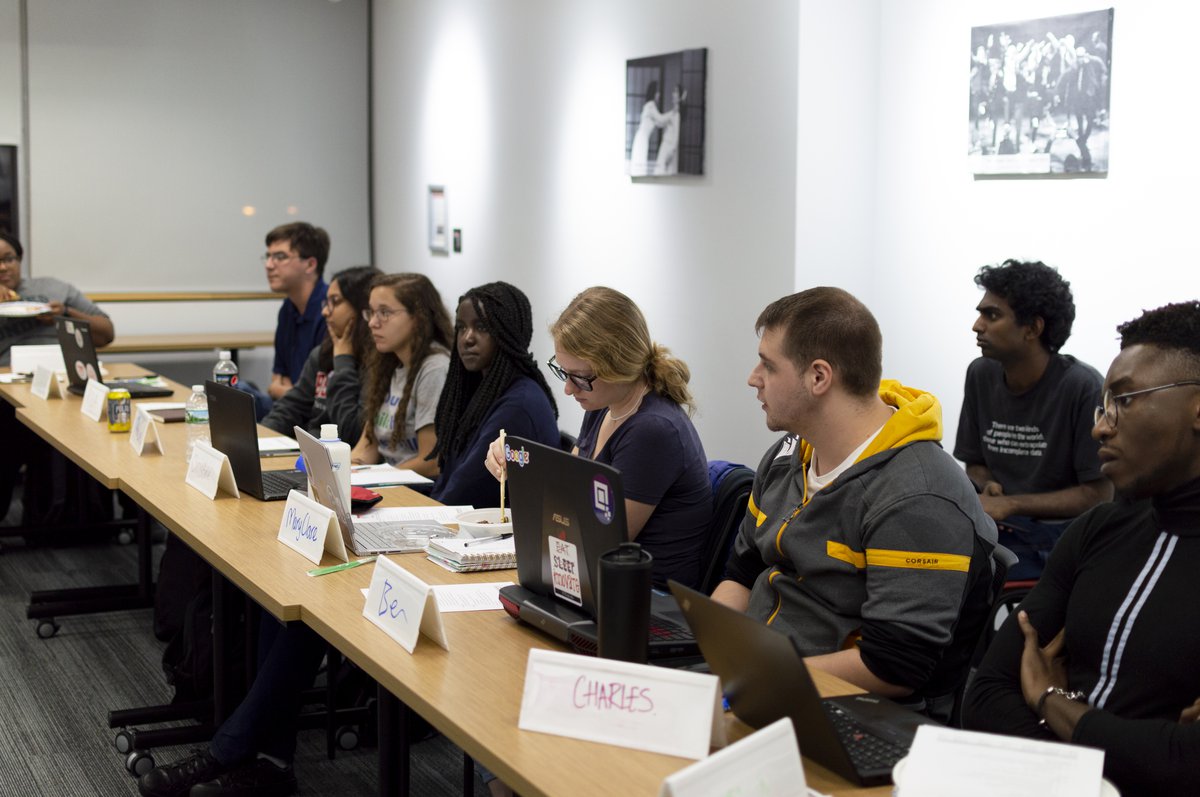 IN THIS FILE PHOTO, MEMBERS OF THE BOARD DISCUSS motions that are on the floor. Brookelyn Parslow/The Polytechnic
By Quinn Gangadharan October 3, 2018

On Wednesday, September 26, the Executive Board meeting approved the men’s club basketball team, an event for the Philippine American League, and changes to the Club Affiliation & Recognition Policy.

Men’s club basketball reported on their progress so far; 70 have people attended its three interest meetings, and more want to try out for the team. However, its goal is to reduce that number to have an A team and B team with around 18 players on each roster. It also explained that league it wants to join—the North Atlantic League Conference—has a $700 initial fee, which would be paid out of pocket. The club is working on getting the old varsity basketball uniforms for current members. A motion to approve men’s club basketball as a Union recognized club was approved unanimously.

Co-president of the Philippine American League, Benjamin Wolf, came before the board to request $375. $50 of the requested amount is to be used towards the Filipino Intercollegiate Networking Dialogue membership fee. However, the majority is for entry and transportation of 10 members to the Fall FIND event at the University of Connecticut, which focuses on tackling problems that Filipinos face today.

During questioning it became apparent that none of the Philippine American League executive board attended the travel workshop for clubs. This raised concern from members of the Board, who were hesitant to approve the request. The policy is to reimburse 40 percent of the travel expenses, and to use rented buses or vans. Wolf resisted this idea, saying cars would allow for more flexibility, and asked for reimbursement for gas money. The gas money request was also against policy—reimbursement for driving is generally a flat rate of $0.25 per mile.

The questioning went far over the time allotted for the presentation, so the motion was called out of order so it could be properly edited. After the second round of questioning, a motion was made to approve up to 25 members of PAL to attend the Fall FIND event and pay 40 percent of bus and registration fees, under the condition that one officer of PAL participates in a private travel workshop with Business Administrator Martha McElligott; that motion was passed 12-1-2.

Chair of the Policies Committee David Raab ’19 presented changes to the Club Affiliation & Recognition Policy. The policy changes included restricting the creation of new clubs to the first seven weeks of the fall and spring semesters, restricting new clubs during The Arch summer semester, and eliminating the provisional status title. The general consensus was positive, however there were concerns about the restriction on club creation during The Arch. A motion to “approve the Club Affiliation and Recongition [sic] Policy as proposed by the Policies Committee” was passed 13-1-1.

The final motion of the night was to recognize and thank Administrative Specialist Nicole Hayden for “play[ing] a fundamental role in supporting our clubs and students to succeed, learn, and achieve” and to “wish her well in her future endeavors” as she leaves her job in the Rensselaer Union. The motion passed unanimously.