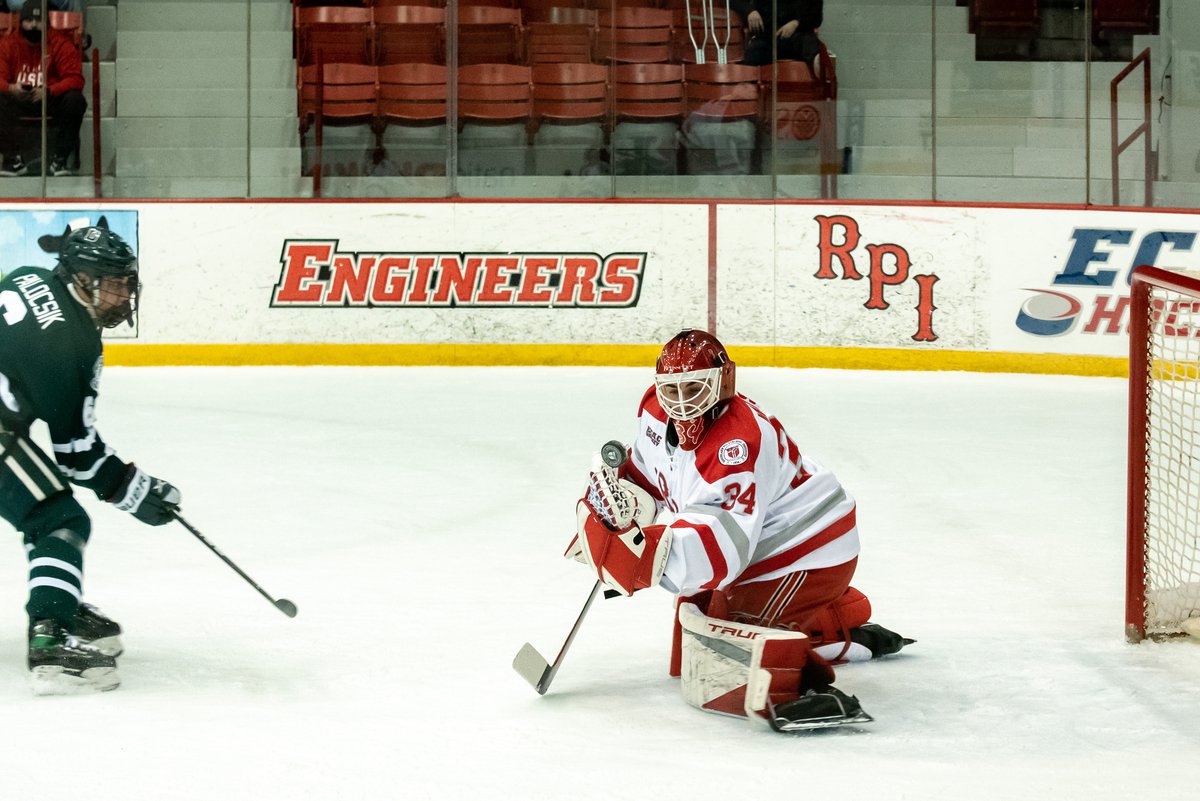 Despite making double the shots, defensive errors caused the Engineers to fall 3‒2 in Game 1 of their first-round series with Dartmouth. Justin Addamo (Gr) led the way for the Engineers, scoring both of their goals in the first period. Jack Watson ’25 made 17 saves in the loss. The two teams take the ice tonight at 7 pm for Game 2.

Dartmouth put a goal on the scoreboard less than a minute into the contest. The Engineers overextended while trying to win the puck in the Big Green’s zone, leaving the defensemen out of position. An incisive pass from Dartmouth defenseman Ian Pierce put Sean Chisholm one-on-one against goaltender Jack Watson ’25. Chisholm buried a wrist shot to take the lead.

The Engineers would answer 15 seconds later. Defenseman Simon Kjellberg ’23 sent the puck on the ice toward a crowd of RPI players in front of the net. Addamo cut across the net and it ricocheted off his angled skate. The puck slid through the rest of the pack and went five-hole on goaltender Clay Stevenson to tie the game up.

RPI killed off two penalties in the middle of the period, only allowing one shot on goal and taking one of their own. With four minutes left in the period, Dartmouth would regain the lead. Kjellberg unsuccessfully reached out his stick to break up a pass, but was caught flat-footed when forward Mark Gallant touched the puck around him. In another one-on-one opportunity against Watson, a poised Gallant darted a shot into the top left corner for Dartmouth’s second goal of the night.

Addamo, again, responded immediately. Lauri Sertti ’24 lifted a perfectly weighted saucer pass to Addamo, who was poaching at the Dartmouth blue line. Addamo overpowered a Dartmouth defenseman, keeping the puck on his forehand as he glided towards the net. He patiently waited for an opening and launched a shot past Stevenson for the equalizer. Despite trailing twice in the first period, the Engineers were only behind for 43 seconds. 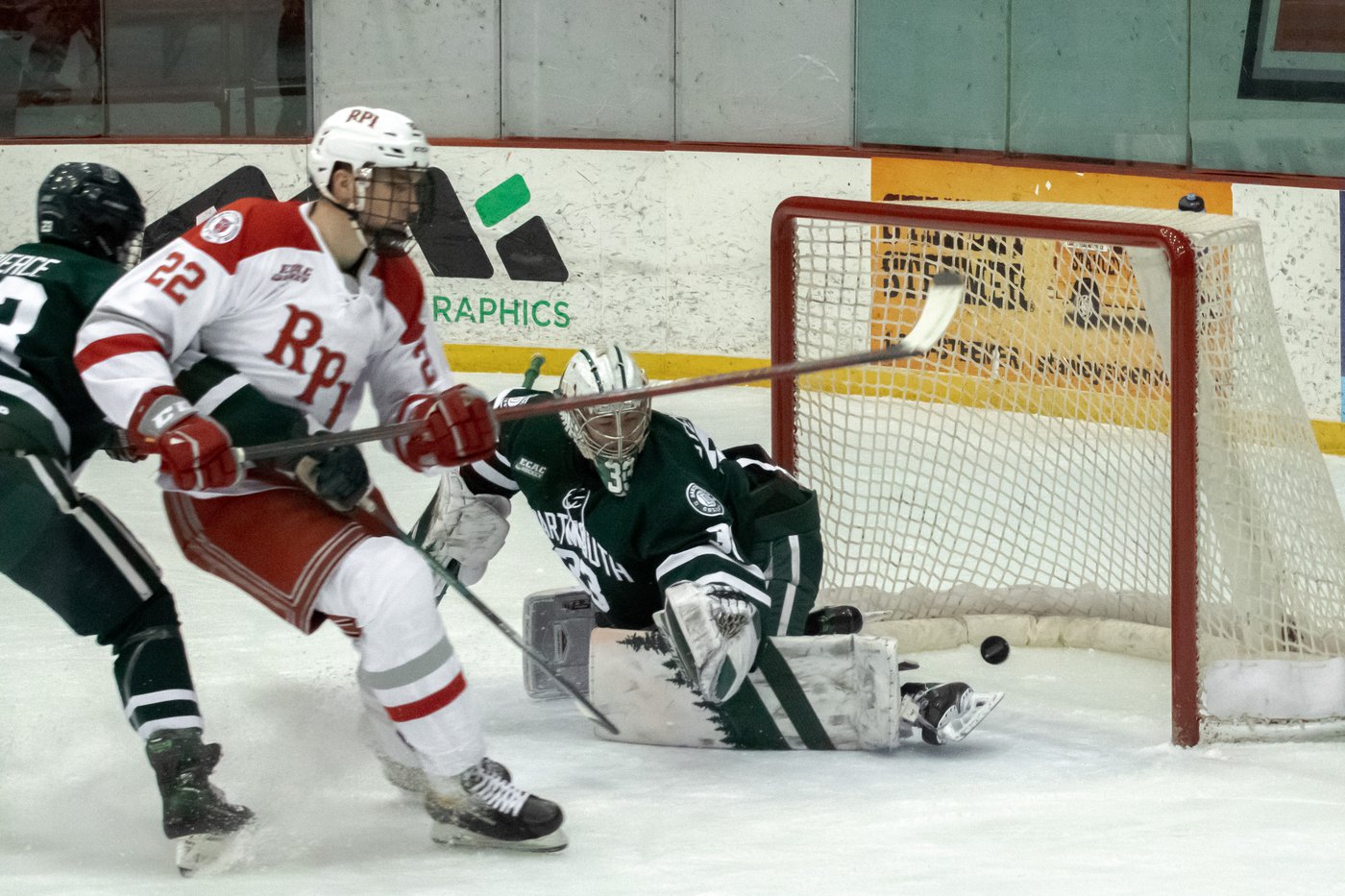 RPI’s attack put heavy pressure on Dartmouth in the final three minutes of the period, but Stevenson was solid in the crease. The Big Green nearly scored with less than a minute left when the Engineers, again, left Watson out to dry. Dartmouth defenseman Tanner Palocsik poked the puck off the stick of Shane Sellar (Gr) at the blue line, giving him a breakaway. Watson made an expert glove save to keep the game level heading into the first intermission.

The Engineers controlled the majority of the second period, barraging Stevenson with shots. Addamo almost completed his hat trick one-on-one seven minutes in, but Stevenson sprawled out to deny him. The game began to get scrappy as tensions rose. Two minutes later, Jakub Lacka ’22 poked the puck free before Stevenson was able to completely cover it. Thinking the puck was frozen, the referee prematurely blew the whistle. Unappreciative of Lacka’s tenacity, the Big Green squad crowded around him and pushed him around, requiring the officials to intervene.

Another two minutes later, the Engineers almost took their first lead of the game. A no-look backhand pass from TJ Walsh ’23 behind the goal opened up Jack Brackett ’24 for a shot. Brackett, while being hooked, slipped the puck five-hole on Stevenson, but the goaltender squeezed his pads together to make the save. Dartmouth regained their lead once more with three minutes remaining in the period. Watson made an initial save that awkwardly bounced off the end boards to the side of the net. Dartmouth forward Jeff Losurdo poked the puck away from Watson before he could cover it and sped around the goal. Losurdo managed to sneak in the wrap-around just before a kneeling Engineer was able to cover the post, putting the Big Green up 3‒2. That score persisted into the second intermission.

After winning the faceoff to begin the period, RPI dumped the puck into the Dartmouth end. Stevenson came out to play the puck but ended up giving it away in front of goal. However, he quickly dove in front of goal to stop the puck and left the Engineers unable to capitalize on his mistake. The Engineers dominated the final frame, but they would need more if they were to get a goal back; countless RPI opportunities amounted to nothing, but not for lack of effort. With less than four minutes on the clock, Addamo dove out to try to sweep in a rebound, but somehow, Stevenson made the save.

Watson was pulled with two minutes remaining. The Engineers worked the puck around the zone, looking to feed the puck in front of goal. They relentlessly threw the puck towards the net in desperation, but it was not enough. Dartmouth took Game 1. Game 2 will happen tonight at 7 pm at the Houston Field House. 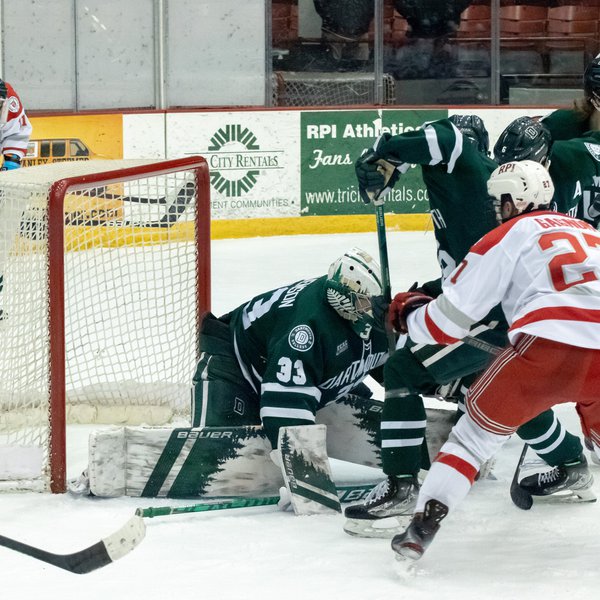 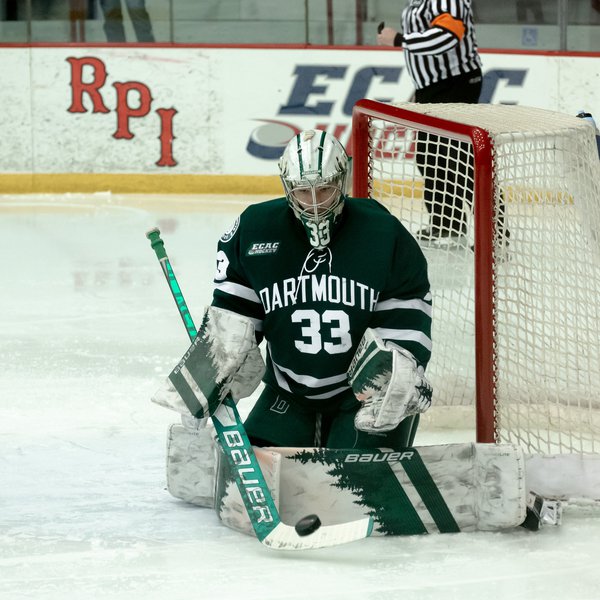 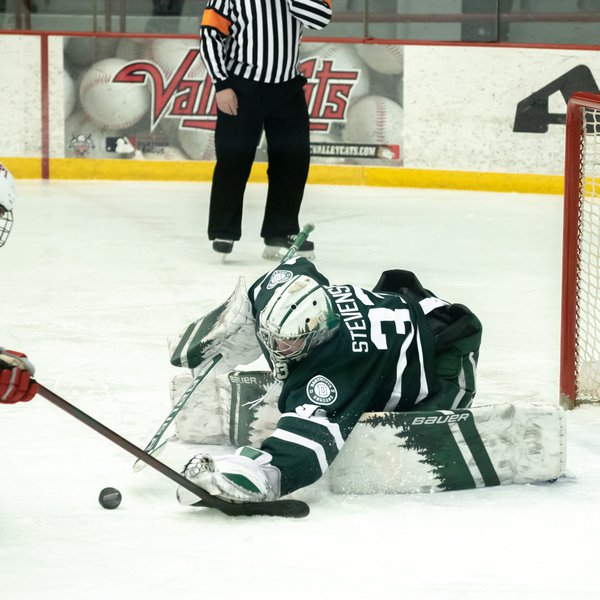