Posted on November 8, 2017 in Uncategorized by Crystal Vejar, Senior Reviewer 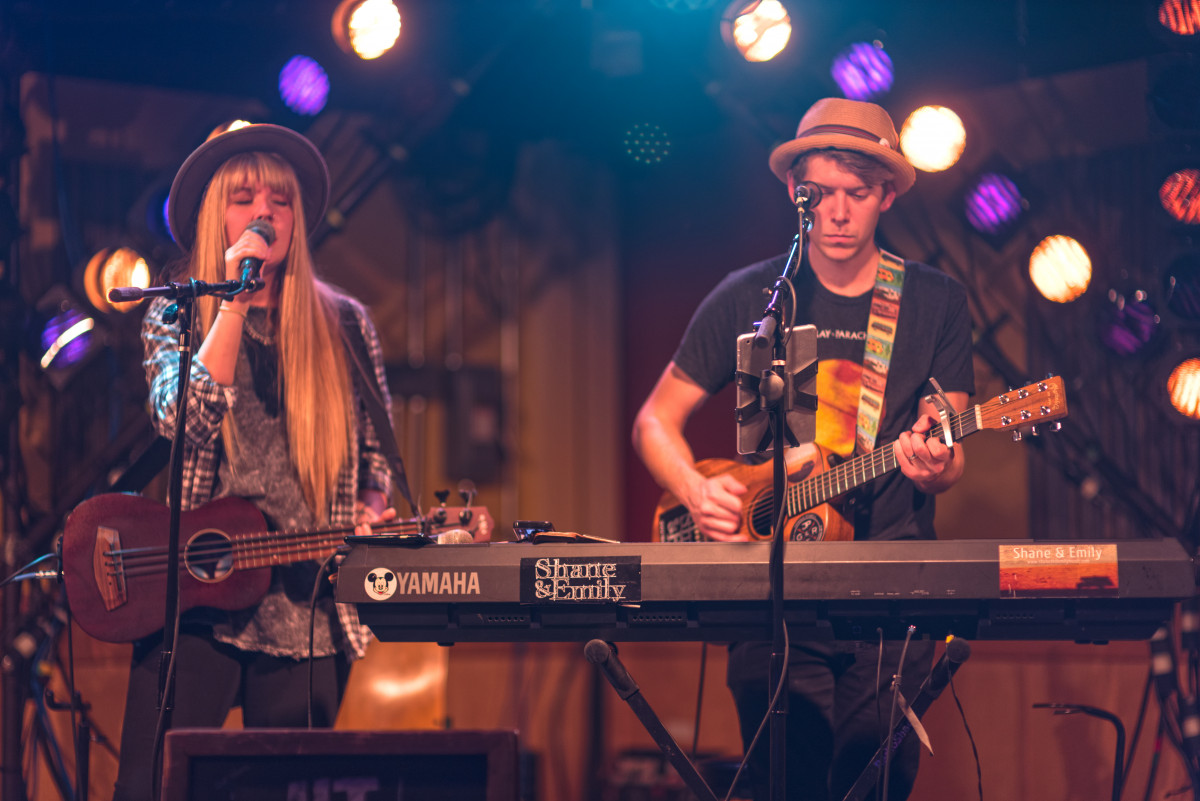 Crystal Vejar/The Polytechnic
TRAVELING THE COUNTRY IN THEIR RV, SHANE & EMILY PERFORM at college campuses and bring acoustic music and a sense of humor.

This past Saturday, as part of UPAC Concerts’ Fall Concert Series, Shane & Emily performed in Mother’s Wine Emporium from 8 to 9:30 pm. The charming couple played a wide range of music, with lots of covers and originals. Their sound is pop, acoustic, and folk with a lot of voice harmonization that fits perfectly. They gave off positive vibes, as well as a sort of sweet, romantic vibe that is accentuated by the way they act on stage. Their performance was full of cute back stories to their relationship, lots of dad jokes, and jokes about their future babies. However, the main attraction was really how well their voices harmonized together and their ability to put their own spin on songs that the audience requested through an app.

Shane & Emily are very open to connecting with their fans, and one of their most unique traits as a duo is their ability to engage an audience. Like I mentioned before, they opened up part of their show to suggestions for covers from the audience. In a short interview prior to the show, I was able to ask them a few more in-depth questions to further get to know them, and there I saw how easygoing and open they really are.

The first question I asked was to sort of get a feel for how they grew up and if there was a background to their talent. Shane answered my question of “Is your family musical?” with, “My parents sing, and my sister does as well. She’s also a really good drummer.” So, right from the start I could tell music is pretty important to them.

Music really is a huge part of their lives. Shane and Emily live in their RV with their two cats and travel the United States to perform. They’ve performed at over 100 colleges and universities and also have had gigs at Walt Disney World, and have opened for artists such as Echosmith, Robin Zander of Cheap Trick, Jonny Craig, Caroline Kole, and others. According to Emily, they never say no to a gig, which allows them to spend a lot of their time traveling, sometimes in a not-so-orderly fashion, bouncing from place to place, sharing their music with the world.

When I asked if they ever miss living in a house, Shane automatically replied, “never!” Their lifestyle completely revolves around their passion for singing and performing, and they really wouldn’t have it any other way. Emily commented that she doesn’t mind living in an RV, but sometimes misses being in one city for more than a day, which tied into her answer for the next question. I asked Emily what their main goal as performers is, as Shane continued sound checking and working on their set up he jokingly shouted, “To become massive famous!” Emily explained that while that may have been their goal at some point, ever since they started talking about having kids, their real goal is to be able to stay in a different city for as long as they want and still have people come to their shows. “Kind of like the Civil Wars, you know? People will come to their concerts no matter where they are when they hear they’re performing. We just want to have followers, not really be massive famous, just to be able to make money and spend more time in each city!”

When I asked what they like to do outside of music, Emily laughed and commented that really 99 percent of their time is focused on music, but they did start getting into reading, especially the classics. “When you’re married, you should share your partner’s passions, so when Shane got really into reading classics like To Kill a Mockingbird and Moby Dick, I decided I should start reading too. Apart from that, we really like camping and being outdoors in nice, tranquil places.”

Shane & Emily are an overall happy duo, and that really shines through in their music. They currently have one album out and are working on a second. To find out more about them, find their music, or see their concert schedule, check out their website at poly.rpi.edu/s/8uv0i.