Posted on November 4, 2015 in Uncategorized by Jack Wellhofer, Senior Reviewer 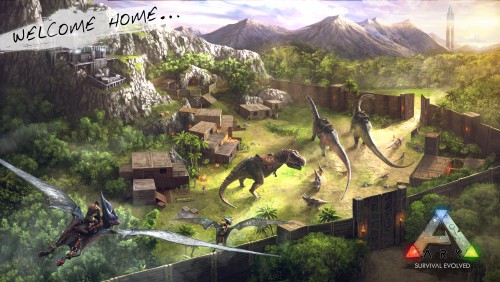 Courtesy of Studio Wildcard
ARK: SURVIVAL EVOLVED COMBINES survival and a pre-historic environment for a unique gaming experience on the PC.

I’m going to preface this review by saying that I’ve only scratched the surface of the content in ARK: Survival Evolved. This game is massive, and with an open sandbox-type of world there is simply too much for me to cover in the few hours I’ve played so far.

ARK: Survival Evolved has been on my radar for a few months now. Some YouTube personalities have been making Let’s Plays, and I’ve seen it featured on Steam a few times, but it wasn’t until last week that I decided to give it a try. In ARK, the player wakes up stranded on an island filled with dinosaurs and other extinct beasts. He or she must craft tools, find or build shelter, survive, and thrive. First impressions: the game is beautiful and detailed. I was a little bit disappointed I had to turn down my graphics settings to get a decent framerate, but I was still impressed. There wasn’t any sort of tutorial or hint for what I was supposed to do, so my natural instincts kicked in. That is, my instincts from five years and countless hours of Minecraft. I determined that the best course of action would be to punch the nearest tree. Lo and behold, my efforts were successful and I was rewarded with thatch and wood, materials for my first primitive tools. Exploring the local flora netted me some much needed food, and from there I was off on my adventure!

In the next 15 minutes, I built myself some tools, a spear, and even slayed a mighty dodo for some additional nourishment. Feeling good about my situation, I wandered deeper into the forest, away from my beach spawn point, only to discover the true dangers of ARK. No, not lions, tigers, or bears (oh my!), but oversized and very hostile dragonflies. A group of three or four took down my unsuspecting survivor. And that would set the tone for my next few hours.

You see, dear reader, in ARK you die. You die a lot. First I was killed by dragonflies, so I started again. I gathered my tools and wandered safely on the beach. And there I discovered that dilophosaurus spawn on the beach, and I was attacked and eaten by them. I accidentally poked a brontosaurus with my spear and it crushed me. I was chased through the swamp by a huge crocodile. I was attacked by a dilophosaurus again. I discovered a cliff by walking off it. I met another player who shot me with a bow. These are merely some of the ways I have gotten myself killed.

That said, I had a ton of fun doing it. The developers have created a super enjoyable survival game, with an extremely interactive world to challenge your skills. All of the rocks, trees, shrubs, and creatures could be utilized for survival. There definitely is a learning curve, and without a tutorial it feels pretty steep, but the feeling of success I felt when overcoming a new challenge was great. Yeah, I had to start from square one 10 or 12 times, but each time I learned from my death (except for those dilophosaurus, who always seem to sneak up on me), and was able to try a new strategy.

From what I can tell, there is a huge portion of ARK: Survival Evolved that I haven’t even touched yet. Dinosaurs can be tamed, crops can be farmed, and huge fortresses can be built. For a game that is still in early access on Steam, I’d say that’s pretty good. The developers are actively taking suggestions from the community, so I can’t wait to see what the final product will look like. While the game does need some optimization and balancing, overall it’s an enjoyable, dinosaur-packed game.