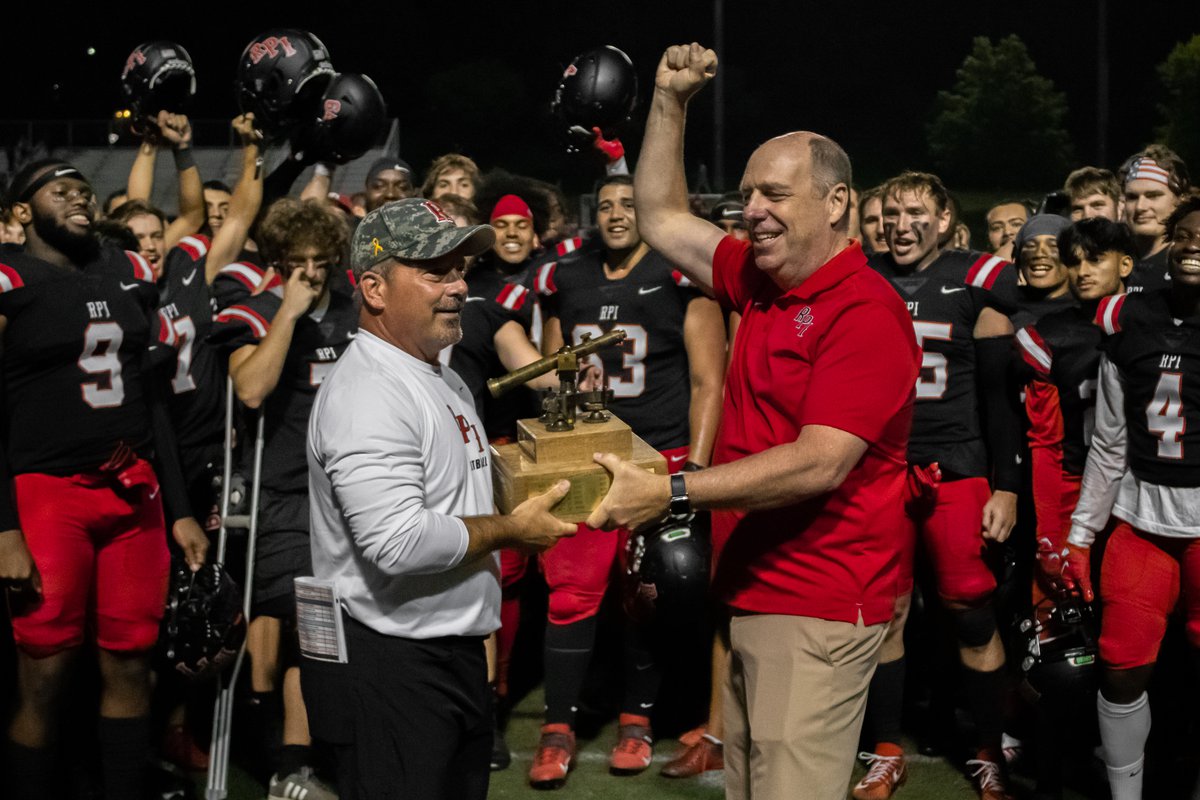 Rensselaer blew out WPI 37‒0 to remain reigning champions of the Transit Trophy Game and to keep the hardware in Troy. The RPI offense threw for 151 passing yards, ran for 231 rushing yards, and scored five touchdowns. The defense racked up eight sacks, collected two interceptions, and held WPI to 105 yards of total offense to shut them out.

Before kickoff, RPI Athletics dedicated a moment of silence to honor and remember Alana Tow, a second-year student who tragically passed days prior.

RPI received the opening kickoff after WPI decided to defer the coin toss. Rensselaer started their first drive at their own 33-yard line. Matt Petercuskie started at quarterback, immediately handing the ball off to running back Dylan Burnett for a first down right out of the gate.

On third down, Petercuskie dodged a pursuing lineman and scrambled 12 yards for a first down. Burnett burned the WPI defense on the ground, gaining 47 yards on the drive and bringing the home Engineers down to the WPI 10-yard line. On third and 7, Petercuskie dropped back in the pocket and scanned the end zone. Peter Lombardi beat his man on an in route, and Petercuskie tossed a pinpoint pass into his hands for the touchdown. Rensselaer took a 7‒0 lead after just four and a half minutes. 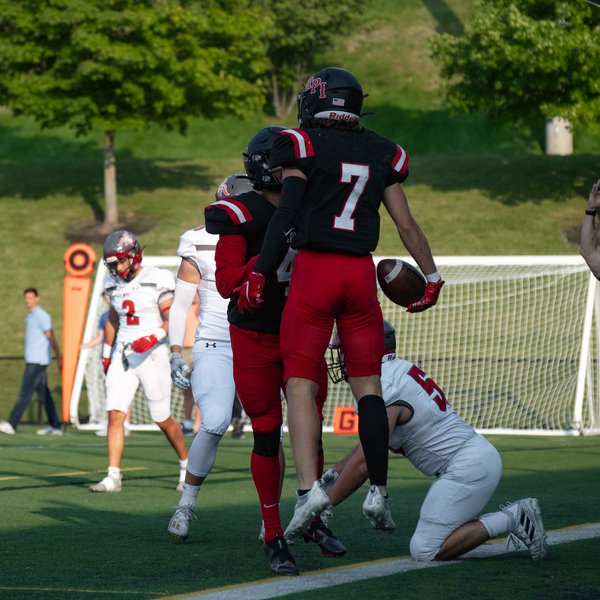 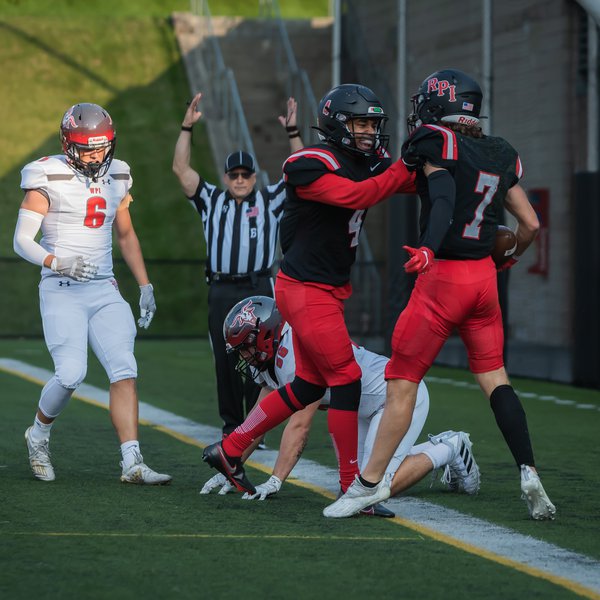 WPI failed to cross the halfway line on the following drive, giving RPI possession back at the 25. Running back Christian Buckley carved through the Worcester defense, rushing for 31 yards on the first three plays of the possession. Rensselaer continued to advance quickly upfield. On second and 8 at the WPI 21, Petercuskie lobbed a throw to a tightly-covered Lombardi. Despite the lack of space to catch it, Lombardi made the unreal reception and shrugged off a tackle to put RPI up by another six points. The resulting extra point was blocked, so the score stayed 13‒0 with a little more than three minutes left in the opening quarter.

The Rensselaer defense stuffed WPI on the next drive, keeping them to negative yardage on a three-and-out due to a four-yard sack from Nate Sicard. Lombardi, the star of the first quarter, sustained an injury on the following punt and did not return for the remainder of the game; his absence will be a huge loss as RPI continues their season. Rensselaer’s possession continued into the second quarter. 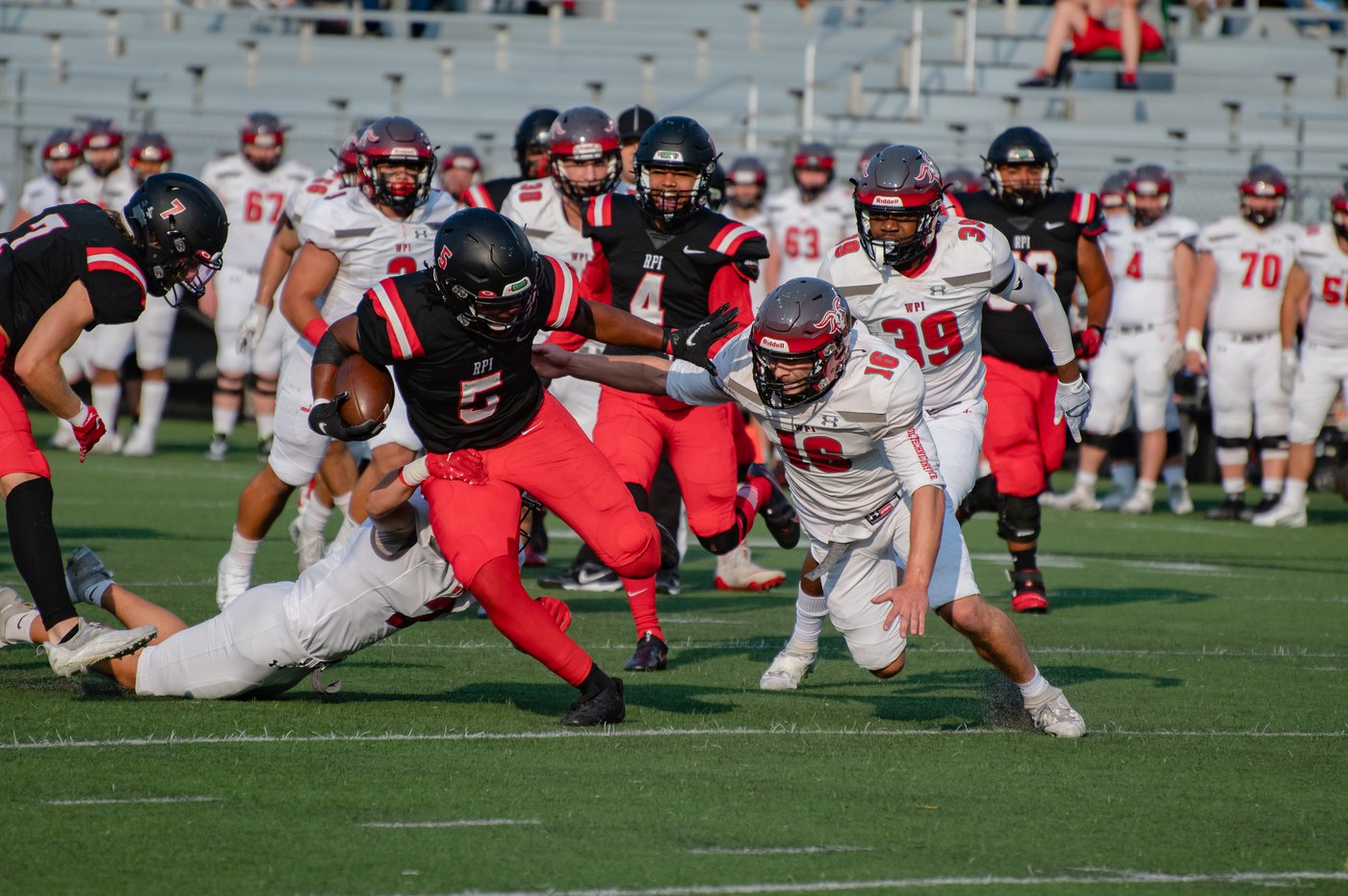 Burnett continued his rushing dominance, helping RPI reach the red zone. Stopped on the next three plays, Rensselaer went for the fourth-down conversion two yards from the line-to-gain. The offense set up in the wildcat formation with Sterling Walker-Sutton receiving the snap. Walker-Sutton rushed through a gap for a gain of three yards, enough for a new set of downs. RPI continued running wildcat plays until Walker-Sutton breached the plane of the end zone for the score. The Engineers were up by 20 with over 10 minutes left in the half.

The rest of the first half was a defensive stalemate. In the last 30 seconds, WPI quarterback Alec Beesmer awkwardly threw an erratically spinning pass into the arms of Conor Noyes for an interception. Noyes returned it all the way to the end zone for a pick-six, but was called back due to an illegal block in the back. RPI was unable to put any more points on the board; the half ended with the hosts still boasting a 20-point lead against their scoreless opponents. 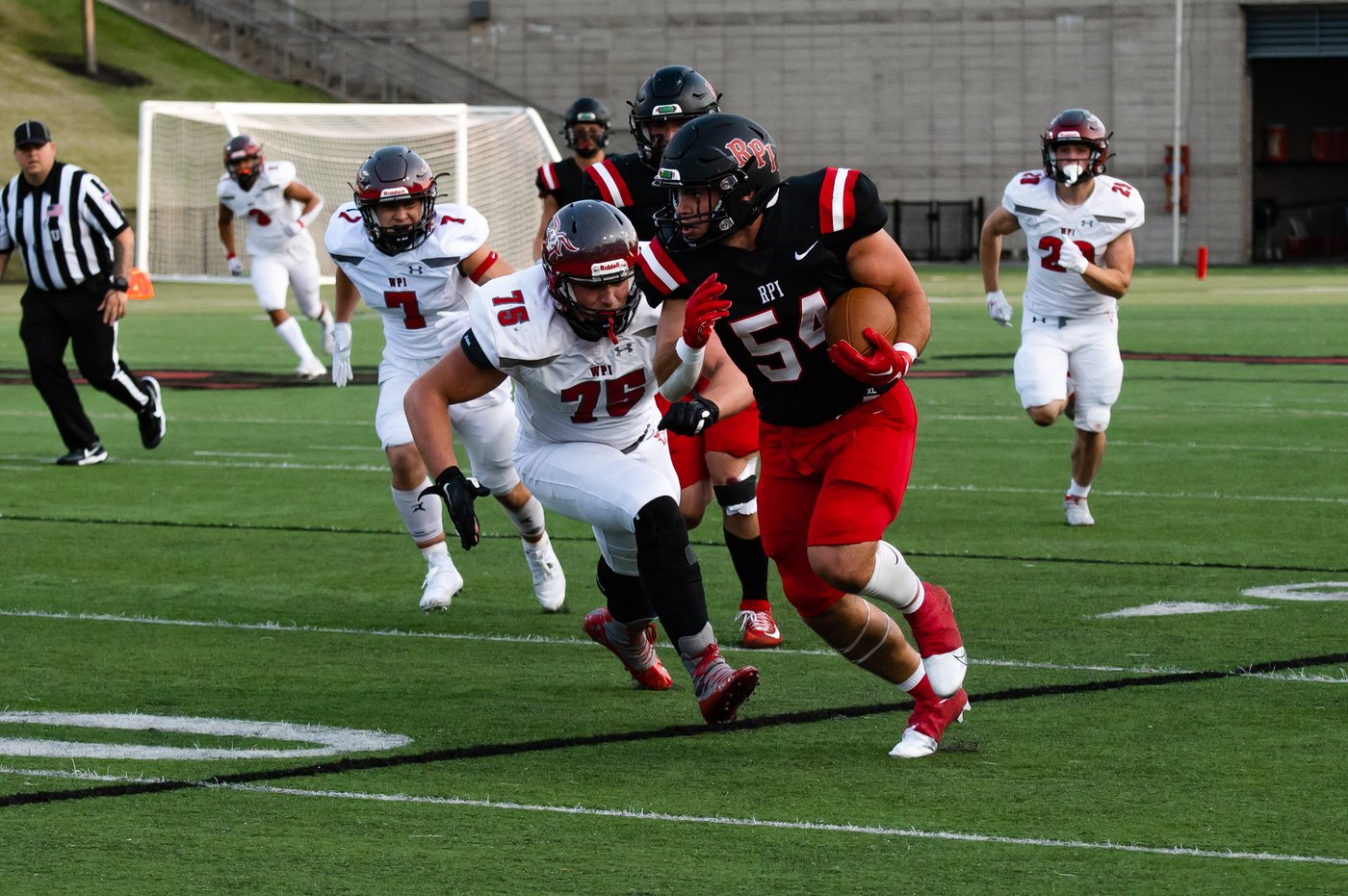 On the opening drive of the new half, WPI broke into Rensselaer territory for the first time, but would ultimately be stopped at the 38. The visitors attempted a fourth-down conversion, but the pass was broken up by Spencer Brockdorff to turn the ball over on downs.

The RPI offense started cooling down. Buckley fumbled on a rush after being folded by tacklers, having to be taken off the field for an apparent knee injury. WPI would be stopped at the Rensselaer 44 on the following possession, but converted on fourth down to keep the drive alive. The RPI defense put an end to the offensive pressure with an eight-yard sack from Noyes.

Rensselaer’s offense continued to struggle in the third quarter. Deen Ninche caught a screen near the right sideline. A massive hit launched the ball high into the air and was intercepted by a WPI defensive end. Thankfully for RPI, the defense was as dependable as they have been all season and pushed Worcester back 16 yards to the 43. On the resulting third and 26, the Rensselaer defensive line applied enough pressure to force the quarterback to roll out to his left. His throw fell directly to CJ Schumaker, who ran it back all the way to the WPI 33-yard line. On second and 8, Petercuskie handed the ball off to Burnett. The elusive running back utilized solid blocking, weaving through the defense and into the end zone to put the Engineers up by 27 with three seconds left in the third quarter. 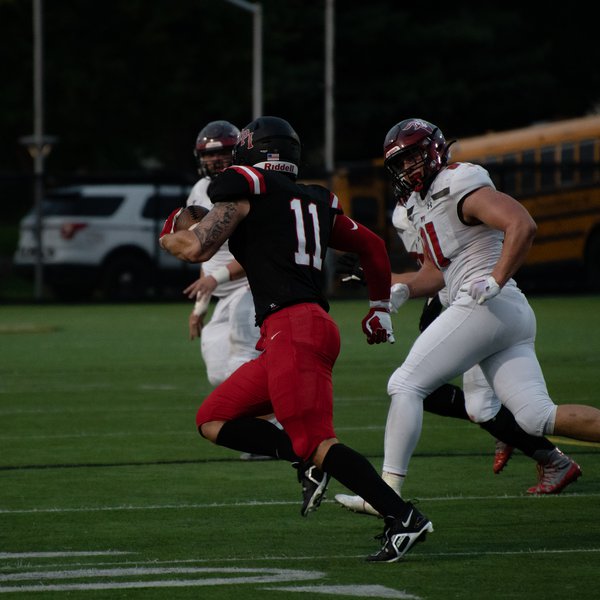 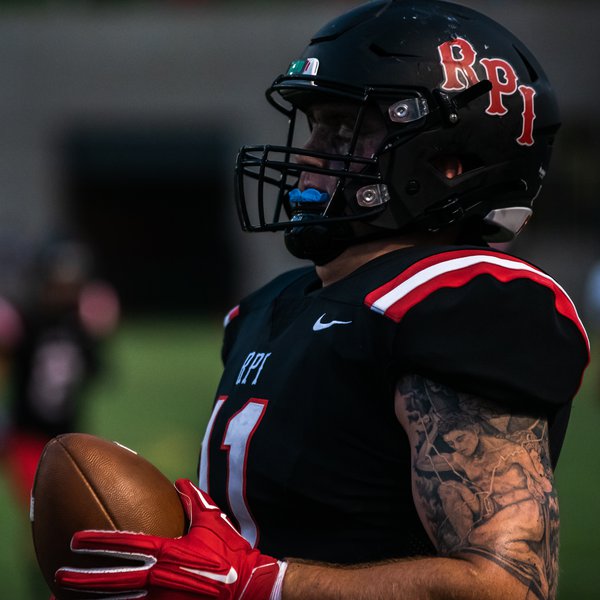 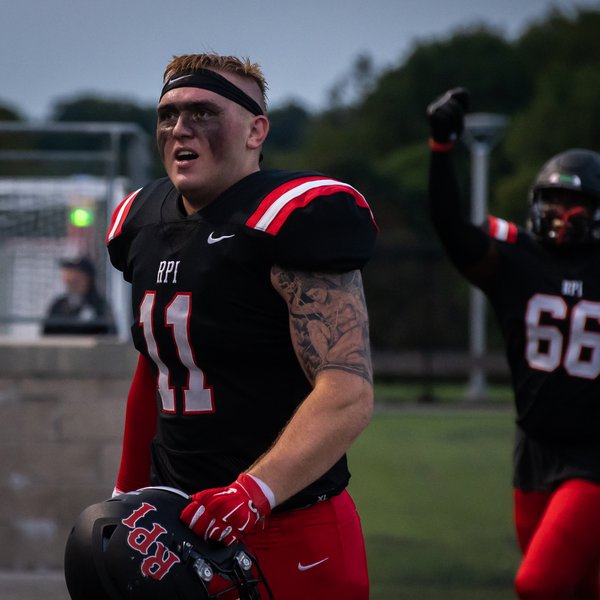 The RPI defense stood firm, forcing WPI to punt on the resulting drive. Kazanowsky replaced Petercuskie at quarterback for Rensselaer. His second snap of the game, Kazanowsky cannoned a throw downfield intended for DJ Palmer. The receiver’s speed created five yards of separation from a trailing WPI linebacker; Palmer casually strode into the end zone for a 45-touchdown reception, RPI’s fifth of the game.

Rensselaer’s defense, again, shut down their opponents. The Engineers took over at their own 20 after a WPI punt sailed into the end zone for a touchback. RPI marched upfield and into field goal range. Kicker Aleksandar Maric stepped onto his field for the 26-yard attempt. His kick soared through the uprights for his first career field goal, putting the Engineers up by 37.

The RPI defense held WPI to -14 yards rushing and 119 receiving. The Engineers totalled eight sacks, with Sicard and Blake Terrizzi credited for multiple each.

Time expired with Rensselaer shutting out WPI 37‒0. The win brings the Engineers’ record to 2‒1 on the season. After the game, President Martin Schmidt ’81 presented the Transit Trophy to Coach Ralph Isernia and the rest of the team. Winning the last two trophy games, the hardware will remain in Troy for another year. 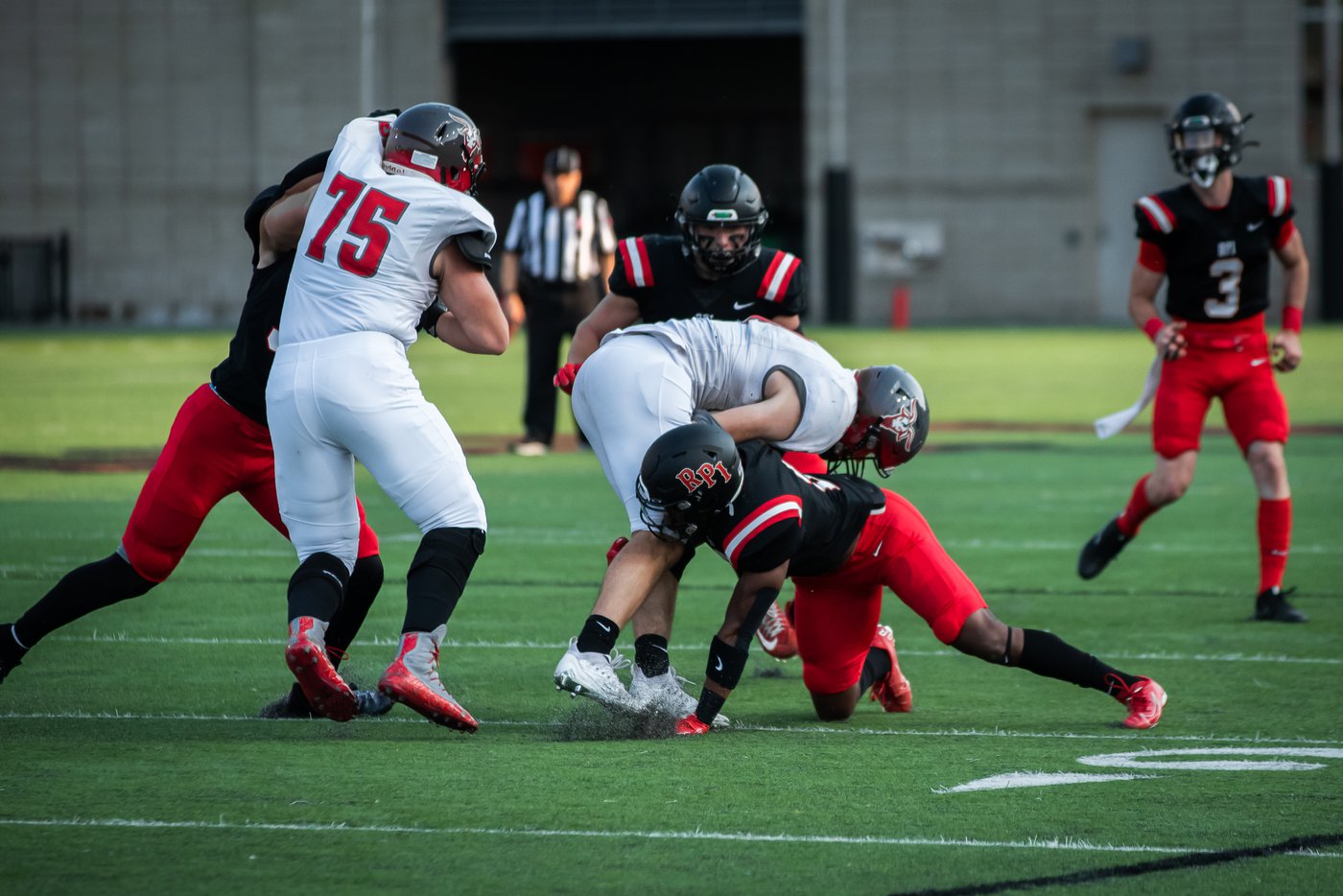 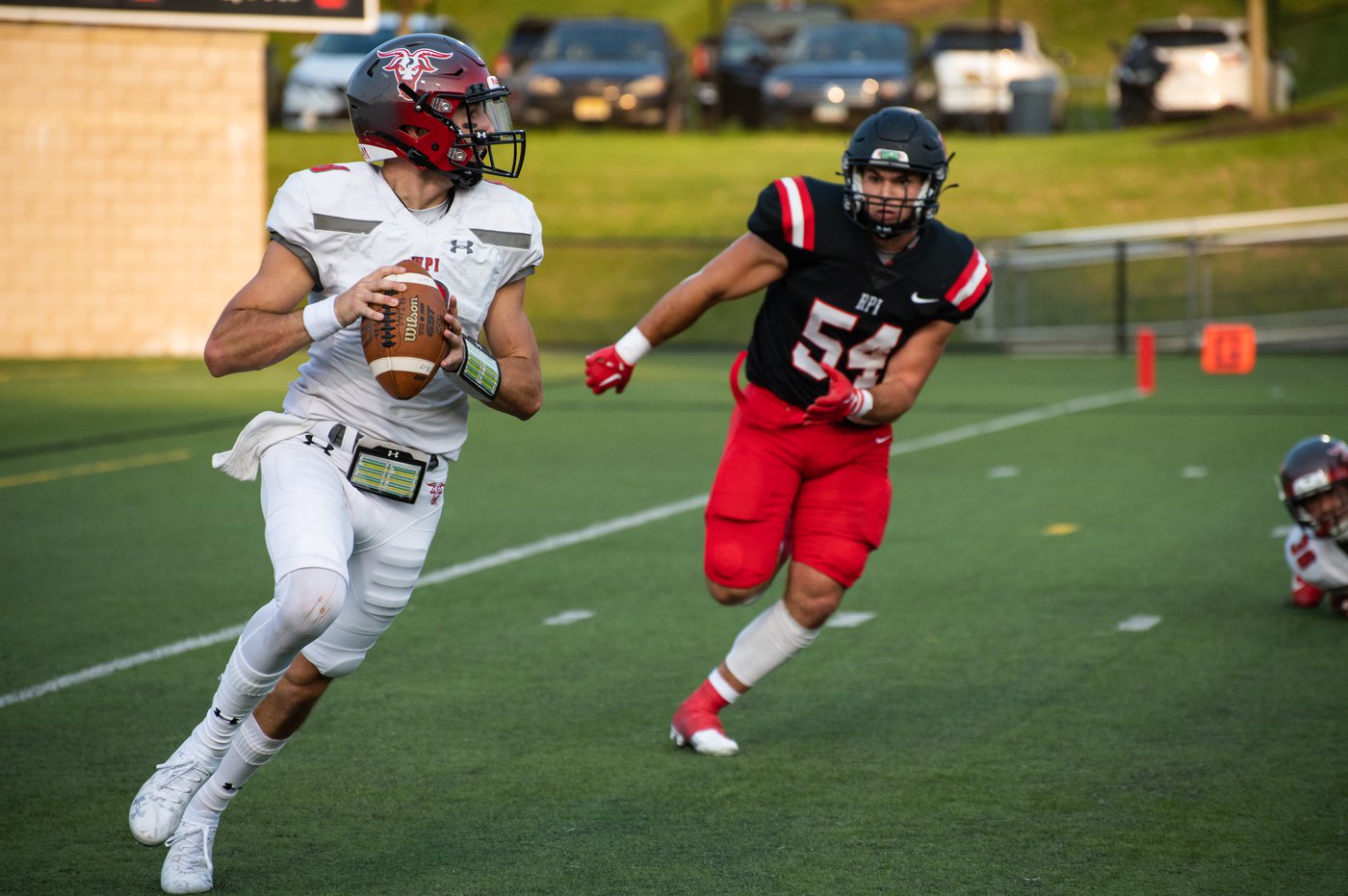 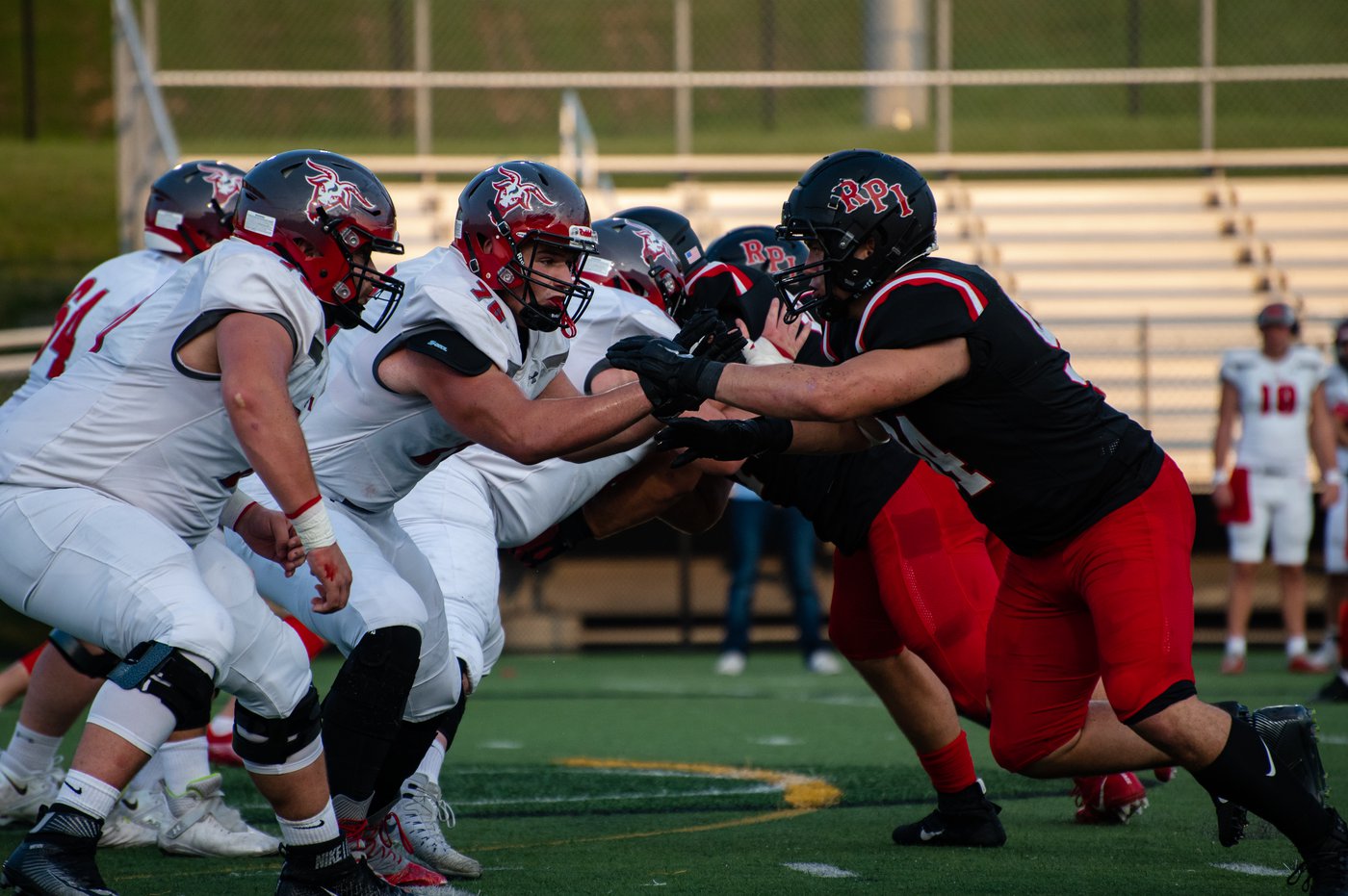 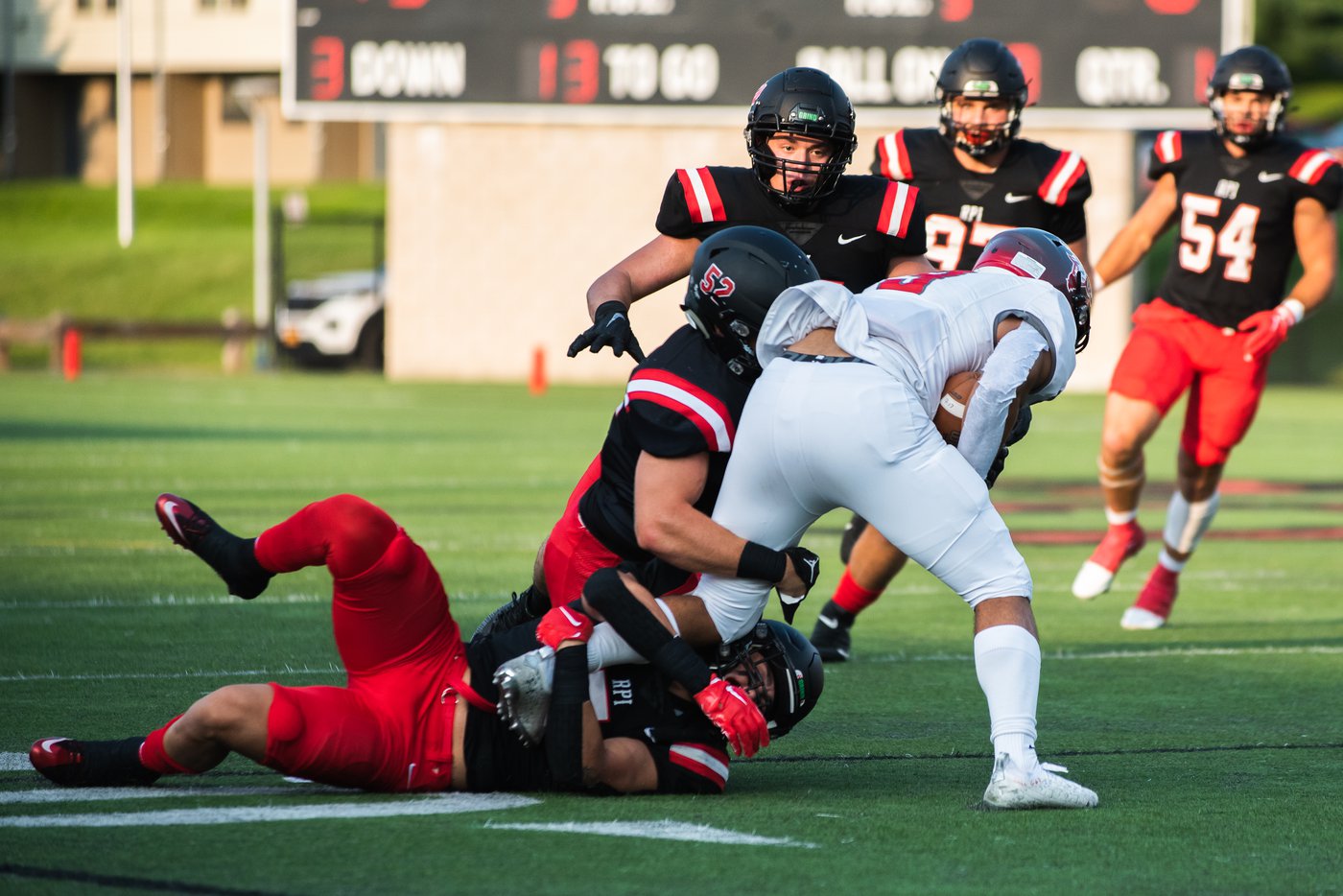 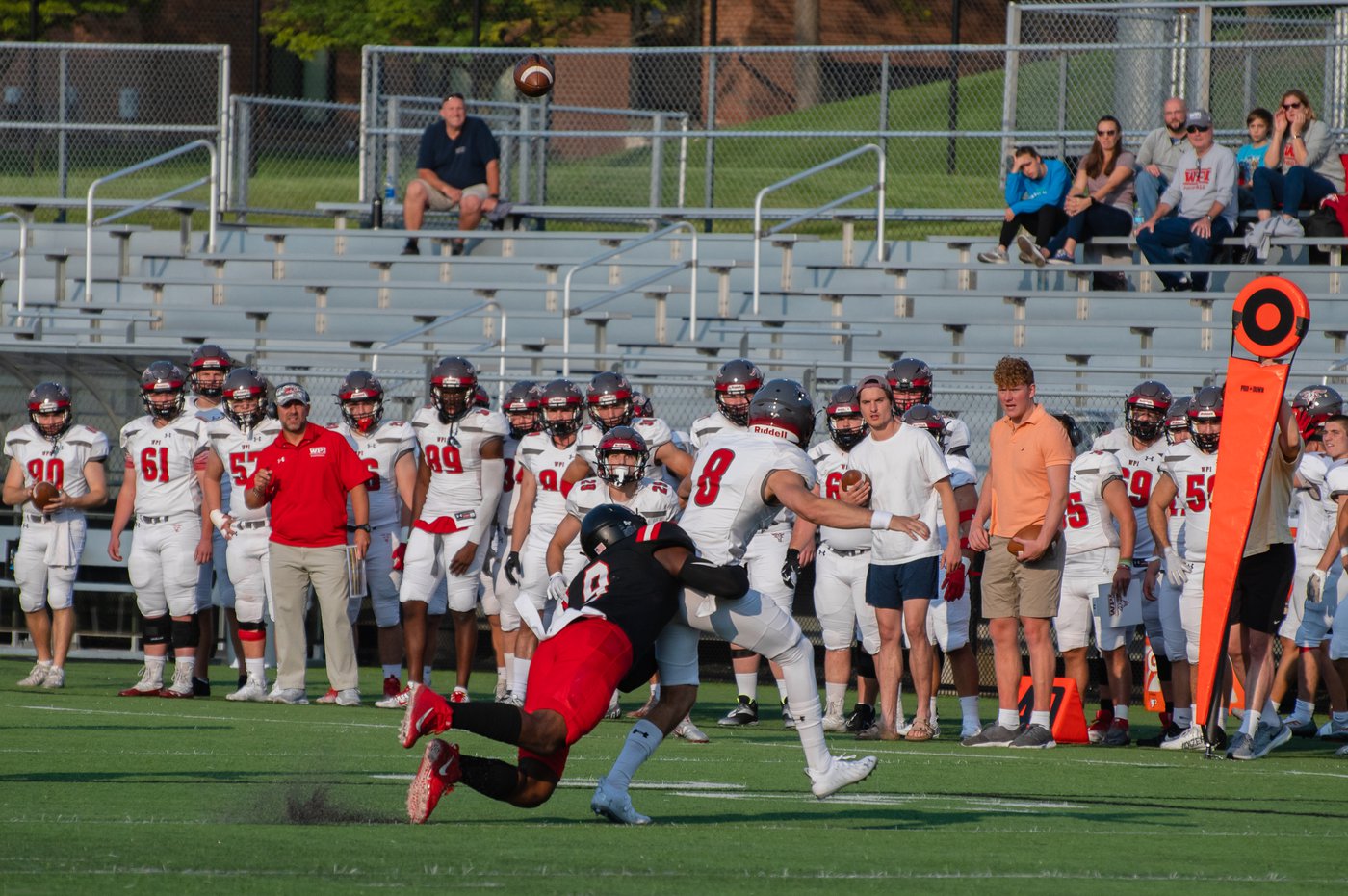