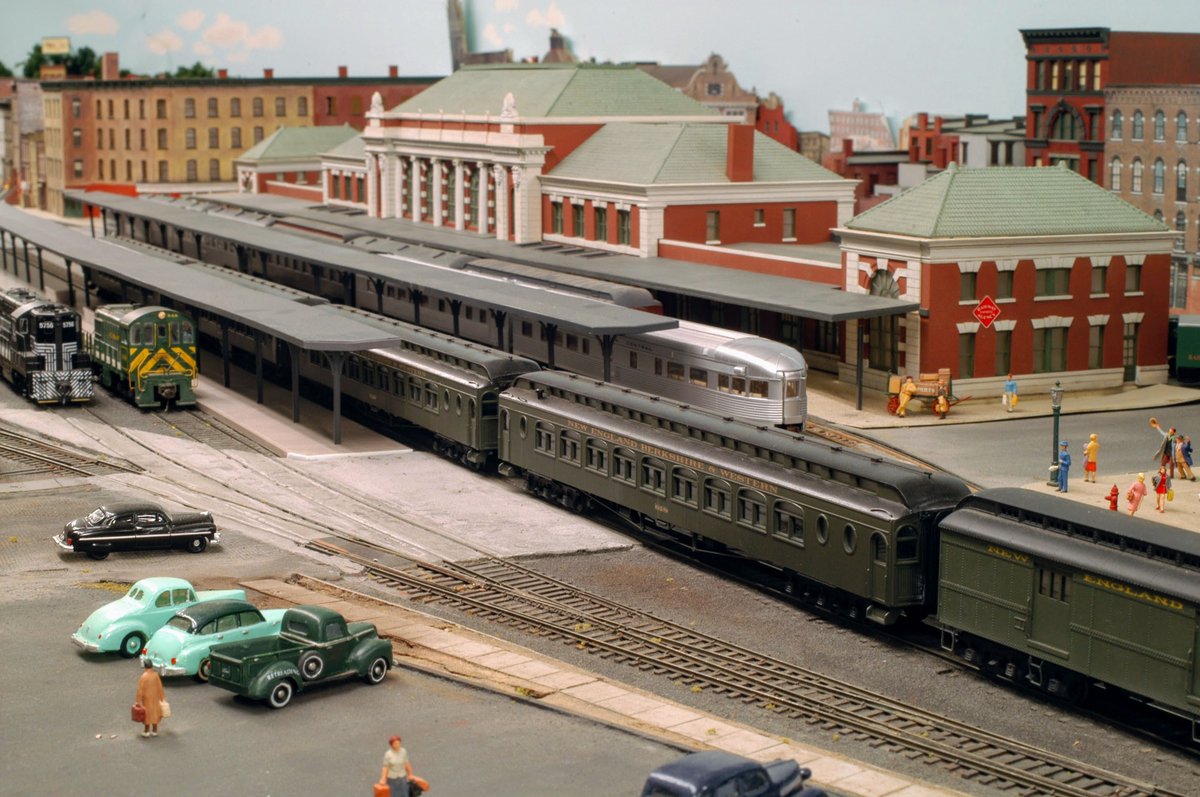 THE RENSSELAER MODEL RAILROAD SOCIETY PRESERVES the history of Troy, with Union Station pictured above, through its creations.
By James Lauser ‘05 January 16, 2019

Troy’s grandiose Beaux Arts styled Union Station closed its doors over 60 years ago. A few years later, it was demolished. Today, Blitman Commons sits on part of its former site. Now it’s difficult to find any evidence that over 100 trains per day rumbled their way through the heart of our city. But for the better part of the last five decades, that history has been preserved in the basement of Davison Hall.

The Rensselaer Model Railroad Society, a Union Club, and its fictitious New England, Berkshire, and Western Railroad models scenes of the former New York Central, Delaware & Hudson, and Rutland Railroads. Club members made up of Rensselaer students, alumni, staff, and community members have spent countless hours making the railroad what it is today. Set in the fall of 1950, the NEB&W winds its way through meticulously and exquisitely detailed 1/87th scale recreations of Troy, Saratoga, the Green Mountains of Vermont, Lake George, and more. The layout occupies a space of nearly 4,000 square feet and is truly a hidden gem of RPI’s campus. It’s also widely regarded as one of the finest model railroads in the world. It’s been documented in several articles in model railroad publications. Covers of dozens of model railroad magazines featuring the layout cover a wall of the club’s lounge. Model railroad enthusiasts have traveled from around the globe just to see it in person.

Now the future of this masterpiece of model engineering is in jeopardy. Planned renovations to Davison Hall are forcing the Society to move. Initially, the club was told that construction could be done largely around the layout, but in early January, they were abruptly informed that the plan was changed, and now the layout must be removed. Furthermore, this must be completed quickly – potentially by the end of March.

The basement of a dormitory is far from ideal for the club, and moving has been discussed before. These talks, however, never went anywhere. A suitable new home for the massive layout was never located and funding was never secured. The physical act of moving the layout would be nothing short of monumental, having never been designed for that, and the planning for how to disassemble it into pieces small enough to be hauled out of Davison without destroying it could take months.

None of these facts have changed. Now, without an idea of how or where to move to, or how it will be funded, the layout must be disassembled in weeks, not months. In a disturbingly common theme for the Institute, student and staff club members are being barred from speaking publicly about the club’s situation. This greatly limits the club’s ability to find a new home or facilitate the move. Right now, a proposed plan is to move the layout into storage with no clear plan forward. One can only fear that this might be the last time anyone sees this important historical artifact.

A 3D scan of the layout can be seen at https://my.matterport.com/show/?m=e6d8iA5vGQ5.