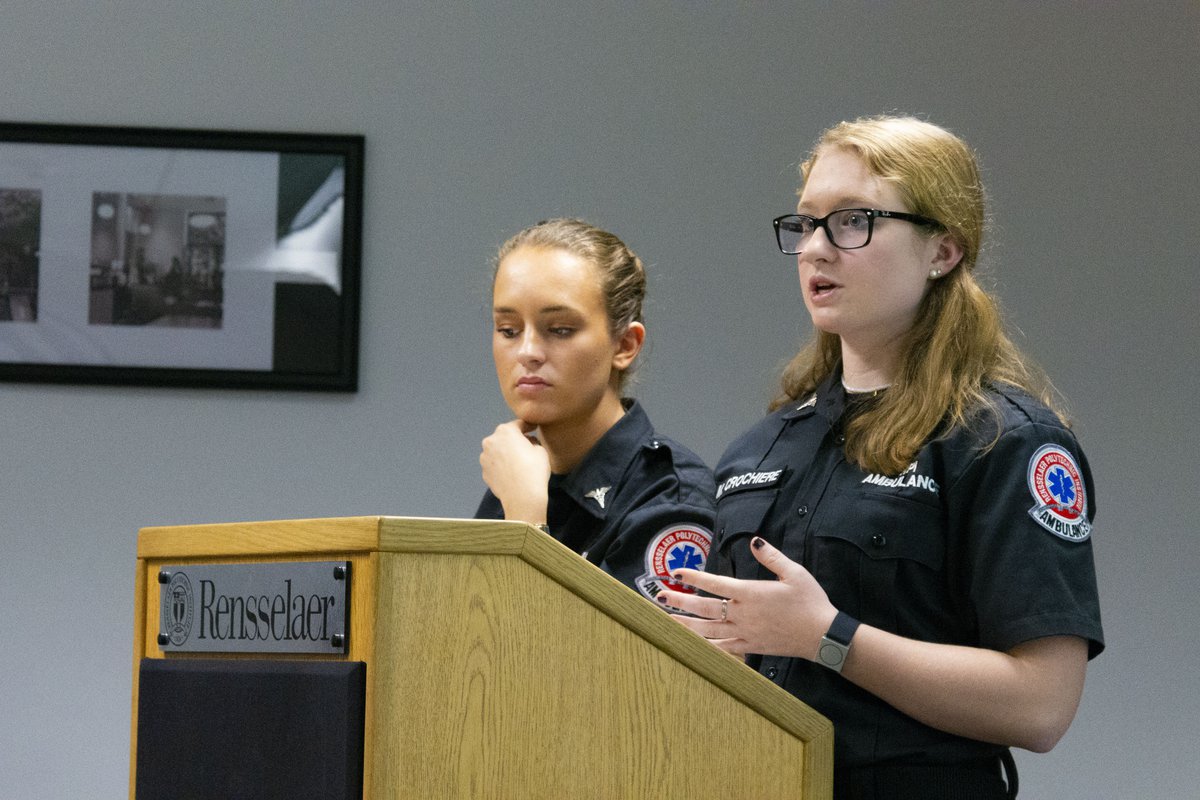 PRESIDENT OF RPI AMBULANCE MARY CLARE CROCHIERE ’19 EXPLAINS the need for a box ambulance and the benefit it gives to the larger community. Alex Ait-Ettajer
By Quinn Gangadharan November 7, 2018

On Wednesday, October 31, RPI Ambulance requested $60,000 from the Executive Board to use towards the purchase of a new box style ambulance.

Between reserves, a gift fund, and WeRGold, the club has fundraised $121,000. After the purchase, they requested to keep $11,000 in case of emergency. While there was not any opposition to the actual purchase of the ambulance or type of ambulance requested, there were concerns about the quantity of money coming from the Union’s facilities reserves.

According to a table presented, the value of services the RPI community has received since 2007 from the ambulance is $1,624,350, including free transport and free event staffing. However, the current ambulance has experienced oil leaks, rust, dents, broken dashboard lights, and heating and cooling failures. The current van ambulance is 12 years old, exceeding the expected six to 10-year lifetime.

President of RPI Ambulance and Executive Board representative Mary Clare Crochiere ’19 explained that a box ambulance is a necessary replacement. Box ambulances are “built to be ambulances,” meaning there is sufficient storage for necessary equipment, and a larger interior for patient safety and trainee observation. Box ambulances are also built on a truck chassis rather than converting a van, which means the box can be remounted instead of replacing the vehicle—altogether saving money in the future. Another benefit of the chassis is that it allows four-wheel drive.

In the presentation on their proposal, “Commonly Asked Questions & Misconceptions” were addressed in slides. First, it mentioned that the services of the ambulance are indeed necessary, even though Troy Fire is also dispatched. Another question addressed was, “Are boxes just fancier?” to which Crochiere explained how it would improve patient care. She explained, “half of us here are graduating this year. We’ll never get to use it.” The box ambulance is also only $78 more expensive to maintain per year according to figures presented by Crochiere. $60,000 couldn’t be taken from facilities reserves—which are the funds used for maintaining the Union and Mueller Center as well as any projects within. At the moment, there is $174,000 remaining in this year’s reserves, and Business Administrator Martha McElligott explained that there needs to be a buffer of $100,000-$150,000 in case anything happens. Director of the Union Charlie Potts said that the students could choose which projects the funds went to, to which McElligott joked, “He’s new here.”

RPI Ambulance is already set to receive $20,000 this year from last year’s leftover reserves as part of the five year plan. At the beginning of Fiscal Year 2020, assuming the Union finishes with a net positive year, RPI Ambulance will already be receiving the first $20,000 available. Executive Board Member Dante Mancinelli said they should just transfer $20,000 now since that adds up to the $60,000. That means that this fiscal year, RPI Ambulance will receive $40,000 towards their ambulance. Director of the Muller Center Steve Allard added that the procurement process will take around a year anyway, so there is no rush to transfer all of the money.

A motion to “approve the reallocation of $20,000 from Facilities Reserves to RPI Ambulance’s Reserves account and approve the use of these funds for the purchase of a Type 1 ambulance,” which is a truck chassis with box, “pending approval from Procurement Services and the President of the Institute,” was made by Brian Mansaku ’20, narrowly passing 7-5-2. The meeting adjourned at 10:30 pm as ruled by a motion at the beginning.