Posted on September 28, 2016 in Uncategorized by Maria Espinosa, Staff Reporter 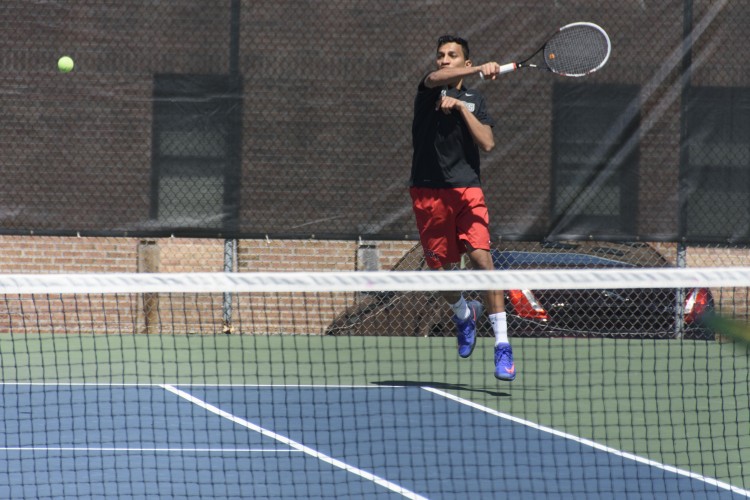 Sidney Kochman/The Polytechnic
THE MEN WERE at Stevens Institute of Technology in the Stevens Doubles Tournament. (file photo)

This past weekend the men’s team competed in the Stevens Doubles Tournament at Stevens Institute of Technology while the women’s team competed in the Intercollegiate Tennis Association Northeast Regional at William Smith College. At the Stevens Doubles Tournament, the Engineers faced the Ducks of Stevens Institute of Technology, the Bobcats of New York University, and the Lions of The College of New Jersey. At the ITA Northeast Regional, Rensselaer went head to head with opponents from several colleges and universities including Union College, Skidmore College, Vassar College and State University of New York Brockport.

At the three-day regional tournament, freshman Allie Kallish made her way to the semi-finals. Kallish went undefeated until falling to Sarah Mensah of Brockport, 1–6, 6–1, 6–7. Kallish won her first four matches, 6–2, 6–1; 6–4, 5–7, 10–8; 1–6, 6–1, 6–3; and 6–4, 6–2, respectively. Not only did Kallish find success in singles, she advanced to the doubles quarterfinals along with her partner junior Melanie Frank. At the quarterfinals, the duo of Kallish and Frank lost 4–8 to a team from The College of New Jersey. In singles, Frank won her opening match 6–4, 4–6, 10–8, before losing her second round match to Kate Christensen of Vassar College by a score of 4–6, 7–5, 8–10. The first round was tough for sophomore Erica Frommer, who after losing the first set 6–2, was forced to retire after one game in the second set. Fellow classmate Andrea Valencia also saw defeat in the first round, losing 0–6, 2–6. Freshman Tess Lubin ’20 lost her opening match 3–6, 3–6, but later won by walkover in the second round consolation. During her consolation singles match, Lubin lost to Tara Edwards of Vassar College, 5–8. The doubles team of sophomore Mailani Neal and Lubin lost their first round match 6–8, and their consolidation match 2–8.

On the men’s side, doubles team of freshmen Zack Ebenfeld and Sebastian Castillo-Sanchez went throughout the one-day tournament with a perfect winning record of 3–0. Ebenfeld and Castillo-Sanchez were the only team to end the tournament with a perfect record. The duo defeated a team from NYU 8–6, a team from Stevens 8–3, and finally a team from TCNJ 8–3. The other Rensselaer doubles team made up of freshman Xavier Oshinowo and junior Sundar Devakottai finished the tournament with a 3–1 winning record. Oshinowo and Devakottai lost their first match to a team from NYU, but went on to win their following three matches. They won their first against Stevens and the next two against TCNJ, 8–5, 8–3, and 8–3, respectively.

Following her great achievements at the ITA Northeast Regional, Kallish was named “Rookie of the Week” by the Liberty League. She was the only RPI player left at the semi-final stage of the ITA Northeast Tournament. Kallish, a former high school tennis state champion, was given this award to honor her growing success. Along with recognizing Kallish, the Liberty League also recognized the doubles team of Ebenfeld and Castillo-Sanchez. This honor was Ebenfeld’s second and Castillo-Sanchez’s first. Ebenfeld won the same award from the Liberty League last week along with fellow freshman Winston Yu. Ebenfeld and Yu played together as a doubles team at the Middlebury College Tournament. Ebenfeld is a former state champion, in both singles and doubles. Castillo-Sanchez was an Individual State Champion in 2015 and received several player of the year awards after his final season as a high school senior.

Both teams will go back to compete on the courts next weekend. The women’s team will travel to face SUNY Geneseo while the men’s team take their turn at the ITA Northeast Regional, which will be held at Hobart and William Smith Colleges.