Posted on March 5, 2014 in Uncategorized by Joe Saulsbery, Senior Reporter 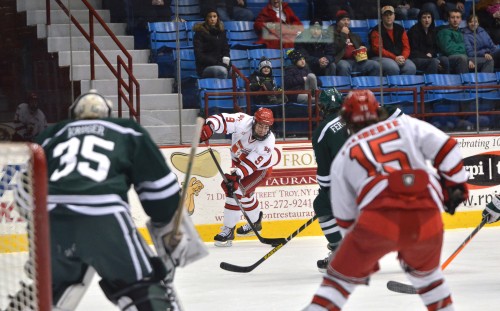 Joseph Shen/The Polytechnic
THE ENGINEERS SCORED 2-0 in the season series against Dartmouth. In this file photo from the RPI–Dartmouth game held January 24 at the Houston Field House, junior forward Matt Neal shoots on the Dartmouth goal.

On the weekend of March 1, the Rensselaer men’s hockey team wrapped up its regular season with games at Brown University on Friday and Yale University on Saturday. Friday night’s game started out slow for both teams, with neither recording a goal in the first two periods of play. But five minutes and 45 seconds into the third period, junior forward Jacob Laliberte started off the scoring with a goal assisted by juniors Curtis Leonard and Matt Neal. Later on, goals by sophomore forward Mark Miller and junior forward Zach Schroeder gave RPI a 3-0 win in Providence, Rhode Island, over an underwhelming Brown squad. This was the first shutout of the year for standout junior net-minder Scott Diebold, whose 856 saves rank first in the Eastern Collegiate Athletic Conference.

In addition to Diebold’s prowess between the pipes, the Engineers boast three of the top 26 goal scorers in the ECAC: Neal at No. 26 with 10 goals, senior captain Brock Higgs at No. 11 with 14, and outstanding junior forward Ryan Haggerty well ahead of his closest ECAC competitors with 24 (No. 2, Quinnipiac freshman Sam Anas, has 19).

A much tougher challenge against No. 15 ranked Yale took place in New Haven, Connecticut, on Saturday night. For nearly 30 minutes, RPI’s defense withstood the test of Yale’s attack. But nine minutes, 12 seconds into the second period, junior forward Jesse Root scored on Diebold, the first goal he had given up all weekend. The game remained 1-0 throughout the remainder of the second period. But, early in the third, Yale scored its second goal and RPI never recovered, allowing three goals in the final eight minutes of the game. With the loss, the Engineers finished the regular season seventh out of twelve in the ECAC with a conference record of eight wins, nine losses, and five ties.

This weekend, the Engineers will host the tenth seeded Dartmouth, Big Green, for a best-of-three, first round series of the ECAC postseason tournament. These games will be held at the Houston Fieldhouse on Friday, March 5; Saturday, March 6; and, if necessary, Sunday, March 7 at 7 pm.

Previously, RPI thrashed Dartmouth 7-1 at Hanover in November, and again outplayed them 4-2 at home in January. In the first contest, the Engineers poured in the first six goals, including a hat trick from Higgs, before Dartmouth managed to break out of the shutout in the third period. In the second game, after Haggerty notched the first goal of the evening, the Engineers led the rest of the way, matching both of Dartmouth’s goals with one of their own.

With regards to the ECAC tournament as a whole, the Engineers will have to make it through two rounds of best-of-three series in order to advance to the final rounds of the tournament on the third weekend of March. The semifinal and championship rounds of the tournament are held at Lake Placid, New York, site of the historic “Miracle on Ice” game in which the heavily favored Soviet Union hockey team lost to the upstart USA squad in the semifinals of the 1980 Winter Olympics. These upcoming games are vital to the playoff hopes of the Engineers, who most likely need to win their conference tournament to advance to the 16-team NCAA championships in late March and early April.