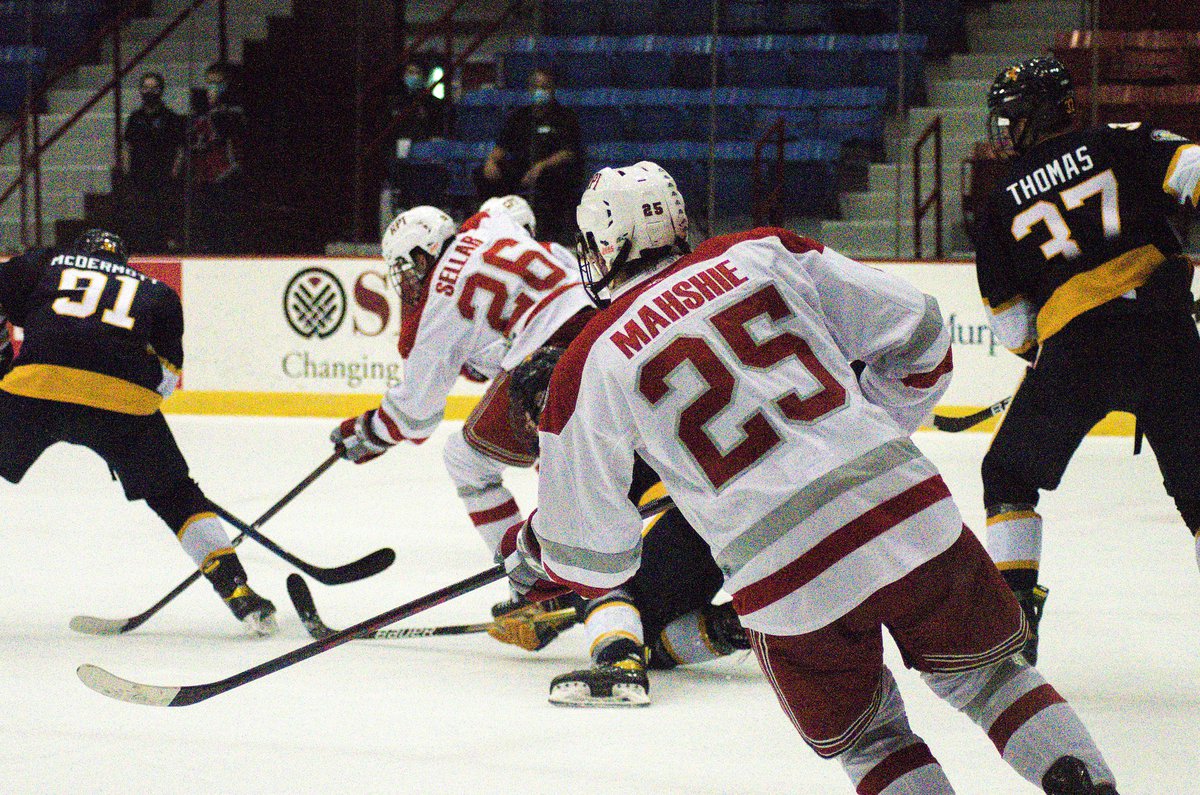 After thrashing the Canisius Golden Griffins 6‒2 the night prior, the Engineers were defeated 3‒2 in overtime on Saturday, a callback to their defeat versus Bowling Green last weekend. The Engineers’ season record is now 1‒2‒1.

Less than a minute into the contest, Golden Griffin Alton McDermott was sent to the penalty box for slashing. A quarter of the way through the power play, Engineer Ryan Mahshie ’23 glided with the puck near the right-wing boards, waiting for an open look. Mahshie made use of a screen from Ture Linden ’22 as his shot whizzed past Canisius goaltender Jacob Barczewski. Mahshie’s first goal of the season put Rensselaer up 1‒0 within the first two minutes.

The two squads were at an impasse for the next ten minutes until a face-off in the Canisius defensive zone sent Golden Griffin Randy Hernandez on a breakaway. Hernandez managed to lift up the puck and sneak it past goaltender Jack Watson ’25 to equalize the game at 1‒1 with 7:26 left to play in the first period.

After the restart, the Engineers barraged the Canisius cage with shots, including one from Jakob Lee ’24 that rang off the pipe. RPI continued their offensive onslaught and it paid off. Zach Dubinksy ’23 was in the slot with his left shoulder to goal, surrounded by three Golden Griffins. A backhand from Dubinsky found the stick of Ottoville Leppänen ’22 in front of goal. Before Barczewski was able to reposition, Leppänen tucked it home for his second of the season. The Engineers continued their dominance but could not raise their lead. The first period ended 2‒1.

The second period was lackluster to start. With 11:42 left in the period, Jake Johnson ’22 was given a minor for hitting after the whistle and Justin Addamo (Gr) got a ten-minute game misconduct for contact to the head, giving the Golden Griffins a five-on-three power play. For the two minutes, Watson stood up to the challenge, making several great saves. Seconds Johnson was released from the penalty box, Hernandez slipped the puck past Watson for his second goal of the night. Canisius maintained their momentum after the five-minute power play was up but had no offensive highlights for the rest of the period. The score was tied at 2‒2 going into the second intermission.

Barczewski suffered an injury at the beginning of the third period, forcing the Golden Griffins to put in backup goaltender John Hawthorne. The first ten minutes saw four penalties—two each—but the ensuing power plays all came up empty. While the two teams were four-on-four, Watson made a terrific save to deny Golden Griffin Simon Gravel. The Engineers had a power play with less than four minutes left to play in regulation. During the two minutes, Golden Griffin Lincoln Erne wrapped up Shane Sellar (Gr) in a headlock and threw him to the ice after Hawthorne froze the puck; the Houston Field House crowd erupted after the referees made no call. Regulation came to a close with no additional goals, sending the Engineers into their third overtime period of the season.

The Engineers had most of the possession in overtime, but couldn’t seem to threaten Canisius. Both goaltenders came up with big saves to keep their respective teams alive. During their only real spell of possession in overtime, Canisius forward Keaton Mastrodonato masterfully stick-handled past an Engineer and cannoned a shot into the back of the net to end things with 45 seconds left on the clock.

The loss brings the Engineers to 1‒2‒1 on the season. RPI travels to Burlington, VT on October 23 to take on the University of Vermont Catamounts.