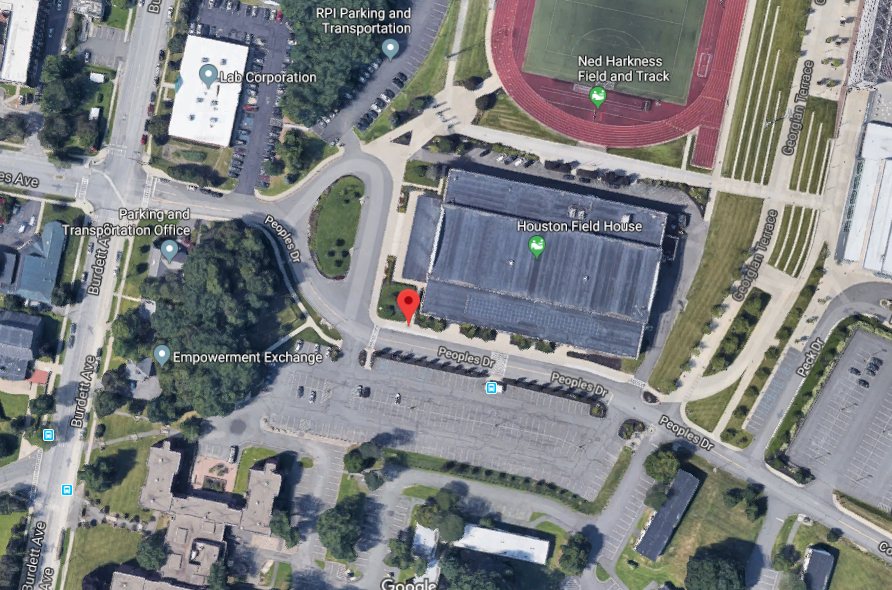 THE MARKER PICTURED above indicates where two students were asked to leave either campus or stop handing out "Renew Rensselaer" buttons.
By Darby Burns March 21, 2018

While handing out “Renew Rensselaer” buttons to the student population, graduate student Michael Gardner was ordered by Public Safety officers to either stop or leave campus.

A couple of hours before the start of the Big Red Freakout hockey game on February 24, Gardner said that two Public Safety officers approached him and one other student, and told them that they couldn’t hand out the buttons where they were—which was by the crosswalk just before the entrance to the Houston Fieldhouse.

Gardner said that, when he held out a tax map that he had brought and told the officers that it was public property, he was informed that it “is private now,” because “RPI has eminent domain over this property during hockey games.” He said he was also told that he couldn’t go towards Sunset Terrace and People’s Avenue because that was also private property, and that he had to go down to the corner of People’s and Burdett Avenue.

According to the Washington Free Beacon, Vice President for Strategic Communications Richie Hunter said in an email that students can distribute materials on campus, but must have prior authorization to do so. The Beacon article can be found at poly.rpi.edu/s/eminent.

Gardner asked Hunter about her statement in an email saying, “upon searching for such a policy, I was unable to locate it; however, I have located several clauses of the Student Bill of Rights which appear to directly contradict your claim…Would you please direct me to the policy requiring prior authorization to distribute materials on campus?”

Hunter responded with the section of the handbook related to the reservation of buildings, classrooms, and outdoor facilities at Rensselaer. When questioned further, she redirected Gardner to the Student Life Office, and said that “eminent domain is not relevant in this situation.”