Goebel explains the future of computers as time capsules 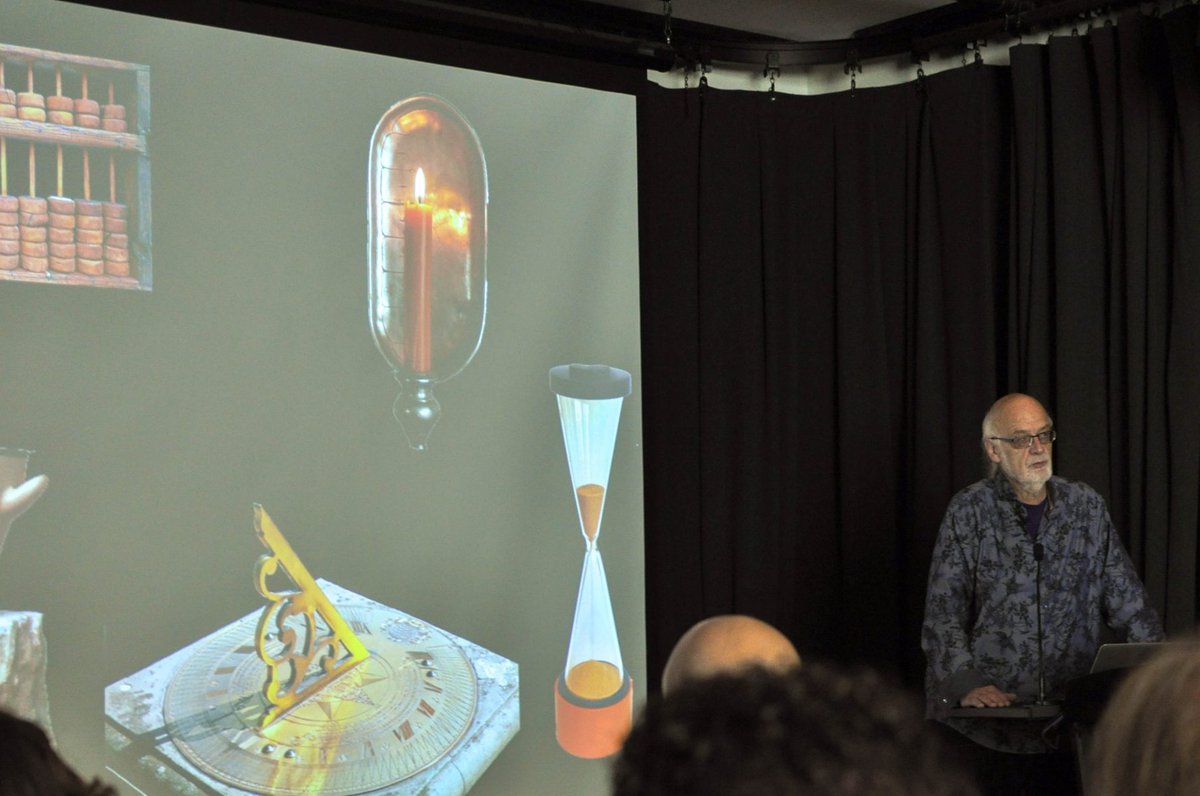 JOHANNES GOEBEL PRESENTS on the issues and solutions of using the computer as a medium for preserving memory. Nicholas Luczak/The Polytechnic
By Namish Gali October 17, 2018

“And then we have the marriage in the heavens[…]we have a clock and a calculator. Had they decided to get married, they’d beget computers,” said Experimental Media and Performing Arts Center Director Johannes Goebel in the introduction of his talk.

In his hour-long talk, he introduced the concept of using computers as a medium to store records of events, explained the history of using computers to capture moments, and the state of the art and the future of recording data on computers.

First Goebel contrasted the human perception of time with how computers perceive time using an example: singing a note. As expected, after four or five seconds one could not tell exactly how long it was. Computers, on the other hand, record time far more precisely. He then brought up a still image displayed on a monitor and explained that, in the computer’s mind, it is not still. The monitor was refreshing dozens of times per second to make it appear still. That’s the difference between a computer’s time and ours.

But computers and humans are similar in other ways. He compared a computer’s process of “reading” data in a stored medium with our process of reading a book.

“When you read a book, you are injecting time into a book—because the book is a still object which needs to be animated in time when you perceive it. To make sense of it, we need to reactivate it into time.”

However, Goebel also addressed why record keeping might be a futile task. “The documentation is not an event. There is no way to completely capture the event.” This sounded like an antithesis to his talk. But he explained that our culture prioritizes documenting our every move instead of enjoying the moment.

Still, he realized that, as he’s getting old, his desire to document everything is growing. If, for instance, someone shut down EMPAC today, and a documentation of all the events were created in the form of a book or a solid-state drive, someone in 20 years may be able to read it.

But, just like how we can’t decode ancient languages, in a few decades the technology used to run current SSDs won’t exist. He substantiated this point by pointing to floppy disks, which very few people still have the technology to read as of now. The data is effectively lost.

“Non-volatile is a euphemism,” he said when referring to modern electronic storage media. “If you took data off a 15-year-old hard disk and tried to read it, you would probably not find anything.” CDs, DVDs and other optical media can be destroyed by ultraviolet light and oxidation. Hard drives, magnetic tapes and SSDs are not designed to last more than, at best, 15 years. He goes on to claim that this is because computer manufacturers keep expecting you to buy a new one fairly often so they don’t think about it from a long-term perspective.

When considering the fragility of modern digital storage media, he claimed, “It’s very difficult to grab time and make it stand still.”

Finally, Goebel looked at one proposed solution—the M-Disc. The M-Disc is a technology first developed at Brigham Young University. It’s a disc made to last over 1,000 years and resistant to temperature and humidity. Yet, it functions like a normal DVD. All it needs to run is a basic computer from this era with a functioning OS, a DVD player, and any necessary peripherals, like a keyboard and monitor.