RPI shuttle service to get cameras, bike racks | The Polytechnic

Posted on October 5, 2016 in Uncategorized by David Raab, Senior Reporter 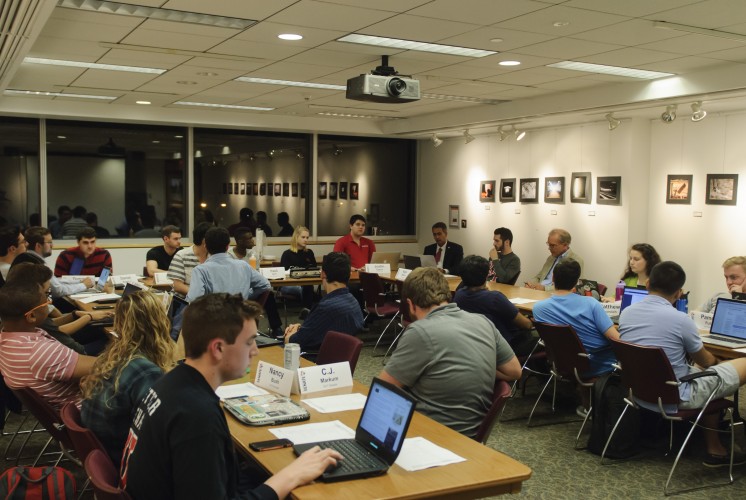 Jonathan Caicedo/The Polytechnic
THE STUDENT SENATE MEETS to discuss an upcoming proposal to include a late night shuttle service to stimulate business in Troy.

This week’s Student Senate meeting started off with School of Management Associate Professor Jeff Durgee and Director of Auxiliary, Parking, and Transportation Services Alexandre da Silva giving updates. Durgee explained that he wanted to attend the meeting as a representative from the Faculty Senate in order to facilitate communication between the two bodies and was “just here to see what is going on.”

Da Silva updated the Senate on the status of Transportation, Laundry, and Hospitality Services. He mentioned that the East Campus shuttle route had been redesigned to stop on Tibbets Avenue on its way to campus. In the future, new shuttles will have bike racks and security cameras added to them. A big upcoming project regarding the shuttle system is the possibility of Friday and Saturday late night shuttle services being added. According to da Silva, President Jackson asked him to really take a good look into expanding transportation offerings for students. He stressed that while a proposal might be coming in the next several months, no final plans had been made at that point.Initial discussions had led him to believe the best way of doing this would be to add an additional route that would traverse and “penetrate into Downtown Troy” in order to serve students who patronize Troy’s late night businesses. He said that this could potentially be close to a 24-hour operation on Fridays and Saturdays, but stressed that no final decisions had been made yet. He did say specifically he planned on going to the Ruck during the next couple of weekends to see how many RPI students go there on a typical weekend night.

According to da Silva, Sodexo has made changes in order to deal with the large freshman class this year. He said that 48 percent of meal plan holders are freshmen, 32 percent are sophomores, and the remaining 20 percent are voluntary (upperclassmen and graduate students). Commons and Burdett Avenue Residence Hall’s dining halls both got additional tables and chairs. Russell Sage Dining Hall has changed its to-go program in order to accommodate more people using it. If the numbers of freshmen stay at the current rate, da Silva said that major renovations and further expansion of the space of Commons Dining Hall would have to be considered; however, any such plans were only in their infancy as it would take many years to get the major sources of funding required for such a project. Finally, he acknowledged Terra Café, run out of Evelyn’s Café on Wednesdays, and specifically said Evelyn’s heaviest day by far is Wednesday because of Terra Café.

Chairman of the Student Life Committee Justin Etzine ’18 updated the Senate on the resolution of the Preferred Names Petition last year. Before the Student Life Committee worked on this petition, only certain departments on campus such as the Union and Health Center recognized a student’s preferred name and each had their own process of being added to it. The Registrar’s Office will now allow students to fill out a paper form that, once processed, will update their preferred name in many different information systems across campus. This includes the Union’s Club Management System, class lists provided by the Registrar, and the Center for Career and Professional Development. The CCPD will give students a choice of whether they want their legal or preferred names to be submitted with job applications to employers.

As of right now, your Rensselaer ID card will still have your legal name and the makeup of your RCS ID would not change to accommodate your preferred name. A reporter from The Polytechnic asked whether or not the personal information updater on RPInfo would allow a student to submit a preferred name, and Etzine explained that updates made there only affect the RPInfo app. Furthermore, it was explained that all systems on campus only have a one-way sync from Banner, and that changes made to any individual systems will be overwritten the next time they sync with Banner.

The meeting ended with brief reports from the Senate committees. Academic Affairs Chairman Varun Rao ’18 described his committee’s efforts to do research into Rensselaer’s Physician-Scientist Program and advise people on which concentration they should focus on within their majors. Hannah Rabinowitz ’18 from the Rules and Elections Committee reminded the Senate that freshman elections were on Tuesday, October 4.

Tommy Alappat ’17 from the Union Annual Report committee said his group had been looking into the wording of the Union Annual Report and adding information about how the Union would handle the Summer Arch initiative. Sidney Kochman ’19 from the Web Technologies Group gave updates on his efforts to restore files from Flagship Documents and on the progress of efforts to make a shuttle sign-up site as well as a counseling center survey site. The Facilities and Services Committee is planning on sponsoring a dinner for students to connect with Public Safety at Commons Dining Hall.