Posted on April 13, 2016 in Uncategorized by Jack Wellhofer, Senior Reporter 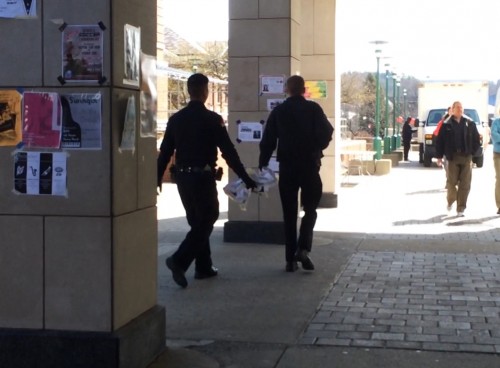 Courtesy of RPI TV
PUBLIC SAFETY OFFICERS AND OTHER INSTITUTE EMPLOYEES REMOVED posters related to the Save the Union student movement during Accepted Students Day this past Saturday.

Mid-morning on Saturday, April 9, RPI TV and members of the Save the Union movement discovered posters relating to the movement were being removed from buildings by officers of the RPI Department of Public Safety.

When confronted by students about the poster removal, an officer said, “It’s coming from the top. We gotta take them down. It’s the way it’s gotta be.”

In audio clips posted by /u/saveourunion on Reddit, officers provided a variety of reasons for the posters’ removal, including the need for posters to be stamped, a sudden and temporary change to the sign policy, and an explanation that the change was solely because of Accepted Students Day.

In video clips from RPI TV, both Public Safety officers and employees from RPI Environmental and Site Services are seen tearing down multiple posters related to the Save the Union movement.

For clarification of the events that transpired this past Saturday, The Poly sat down for an interview with Vice President for Administration Claude Rounds, who ordered the removal of the Save the Union posters.

Rounds wanted to dispel the rumor that the Student Handbook of Rights and Responsibilities had been suspended. “The administration did not suspend the handbook … in fact, we followed the Handbook,” said Rounds, regarding the procedure followed when removing the posters.

Feedback from Public Safety and other sources indicated that there was a significant increase in signs being placed on campus, which warranted action. They were alerted by students that, instead of protesting Accepted Students Day, they would be putting up more signs relating to Save the Union across campus. Rounds took this as “an alert to us that we needed to be more vigilant in terms of the sign ordinance and what was in compliance and what was in violation.”

The Poly asked if it would have been a better outcome for the Save the Union individuals to not alert anyone that they would be increasing their postering efforts. “To suggest that as Saturday went by they could poster the campus and not have that noticed by one of the many people, not just Public Safety … do I think somebody else would have observed and reported this? I would expect so,” said Rounds.

The signs that were removed were in violation of the sign policy, as defined in the Student Handbook. Section three, subsection A, part two says that “outdoor signs must also not be posted on Institute buildings with the exception of the Low Center for Industrial Innovation, Darrin Communications Center, and the Jonsson Engineering Center.” Signs are also not allowed inside the buildings without approval, on glass, or on the footbridge. This was the reason Rounds gave for removal.

Violations of the sign policy allow for immediate removal of the signs in question. The Institute also reserves the right to remove signs that are deemed to be “graphically inappropriate, profane, libelous, in unsightly condition, or outdated information.”

In Rounds’ opinion, the signs were inappropriate and, as their numbers increased, they became unsightly. However, if a student or organization brought a proposal to post a large volume of signs, Rounds said it would be considered by the administration.

When asked if he himself considered the posters “unsightly,” Rounds said, “When you take a look at the number of signs, being installed with masking tape that was wrinkled and crooked, signs all over the place … we do everything we can to make this campus look good all the time.” He said that it is important that “the campus looks good and respectable when we have a large number of visitors here for special events.”

Rounds also said that some people felt the posters were “painting the buildings” with the amount of coverage and that Save the Union was making “an effort to blanket the campus.”

In the videos, Public Safety officers leave a number of campaign posters that were in the same locations as the Save the Union posters. Some raised questions as to why these posters were not removed, despite seemingly violating the same rules. This is because, during Grand Marshal Week, sections of the sign policy are waived for campaign postering, as defined in section five, subsection B.

Rounds reiterated that posters were removed because of the notice received from students. “We’re not inspecting the campus every single day to determine whether a particular sign is in violation or not,” said Rounds when asked why some illegal posters remained up for more than a week.

“There may have been signs up prior to Saturday that we had not removed. Maybe our enforcement [of] every single individual sign that may have been installed was not 100 percent.”

The Poly also emailed Save the Union for a statement. They responded that “without questions, all signs placed on the outside of the CII, DCC, and JEC were in compliance with the sign policy.”

The extended sign policy, approved by the Student Senate, which pertains to campaign posters and posters that could be considered campaign material, allows postering on more locations than outlined in the Student Handbook.

Save the Union members consider themselves a political movement because of the recent Preserve the Student Union petition which reached more than 400 signatures and because of referendums relating to the Rensselaer Union approved by the Senate to be on the ballot for GM Week 2016.

Save the Union does not consider their postering to be excessive. “We do not believe our postering was excessive in any way. We have a large variety of information that we believe is of public interest and requires numerous posters to achieve that message,” they said. It was estimated that around 100 posters were on campus, with replacements put up as posters were damaged or removed.

A full audio recording of the the interview with Rounds can be found at http://poly.rpi.edu/s/1tvh8/.