Posted on May 6, 2015 in Uncategorized by Chris Leong, Senior Reporter 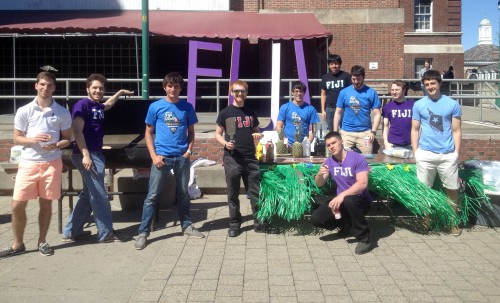 On April 27, the RPI chapter of the fraternity Phi Gamma Delta, also known as FIJI, began their first ever Islander Week. Based around the FIJI nickname, many FIJI chapters hold tropical-themed islander events for charity or social reason. This year, the RPI chapter raised $1,425 for the nine families that were displaced by the fire on Fourth and Washington Streets in Troy, N.Y. on April 10.

On Monday, April 27, FIJI kicked off the week with an inflatable obstacle course on the ’86 Field, playing music and Frisbee from 8 am–5 pm. The fraternity set up a grill and tables in front of the course to sell virgin strawberry daiquiris, hotdogs, and hamburgers. Over two hundred people ran the obstacle course throughout the day, and even more purchased food or drink. On Tuesday, April 28, the chapter tabled outside of Russell Sage Dining Hall from 8 am–5 pm, once again selling non-alcoholic piña coladas, hamburgers, and hotdogs, while promoting their Evening of Performances at their chapter house, the former First Baptist church, in downtown Troy. The event took place at 5:30 pm in the sanctuary of their house. The show was free, but donations were strongly encouraged. The first act was Pumper, a pop-punk band comprised of RPI students, followed by Sheer Idiocy, and The Rusty Pipes.

On Wednesday, April 29, the brothers again tabled outside Russell Sage Dining Hall from 8 am–5 pm, promoting their ultimate frisbee tournament at 3 pm on the Anderson Field. From the tournament alone, the chapter raised $105. On Thursday, April 30, a dunk tank was set up beside the RPI Playhouse, facing Sage Dining Hall. FIJI brothers took turns sitting in the dunk tank and sold softballs to throw at the bullseye target. Over $400 was raised during the day. On Friday, May 1, the fraternity’s founder’s day, brothers once again tabled in front of Sage Dining Hall to promote the day’s event: duct tape a brother. Duct tape was sold by the foot and a member of the fraternity was taped captive on one of the columns by the Center for Industrial Innovation. Those that paid for duct tape could place their strips on areas that had already been duct taped.

In total, from tabling, food, drink, Frisbee, and square cash payments, the fraternity raised $1,425, just shy of $1,500. All of the proceeds will go towards the nine families that were displaced by the fire on Fourth and Washington Streets. The conclusion of FIJI’s Islander Week comes almost two weeks after their win as Alpha Phi Omega’s Meanest Man on Campus, raising $1,797.25 for Peppertree Dog Rescue. For information on the RPI chapter of Tau Nu Phi Gamma Delta, visit https://www.taunufiji.com/.