Posted on April 15, 2015 in Uncategorized by Kelsey McNeely , Senior Reporter 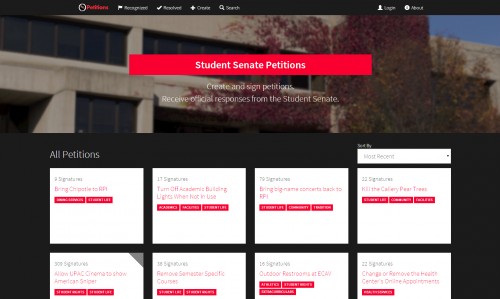 On March 18, 2015, the Student Senate rolled out the RPI Petitions website. The purpose of RPI Petitions is to give students a place to voice their concerns and promote causes they care about. Any student can create and promote a petition. RPI Petitions is based off of Rochester Institute of Technology’s student petition website, PawPrints, which was released in Fall 2014. The RPI Student Senate, led by Kyle Keraga ’15, collaborated with RIT’s Student Government President Ashley Carrington ’15 to kickstart the project. Actual development of the website was led by Chief Information Officer Gabe Perez ’16 and the Web Technologies Group.

There are currently 62 active petitions on the site. Students can search the site for petitions that support causes they care about. If such a petition does not exist, they can create one. Once a petition has been created, other students can sign it using their RCS account. Once a petition reaches the 250 signature threshold, the petition sponsor is placed on the agenda of the Senate within three weeks and is invited to speak before the Senate. The Senate can then decide whether or not to support it. Status updates for recognized petitions can be found on the recognized petitions’ pages. The site is jointly moderated by the Senate’s Rules and Elections Committee and Web Technologies Group. The Moderation Policy, determined by R&E and approved by the Senate, can be found on the RPI Petitions website.

“Save the Trees” was the first petition to pass 250 signatures. The goal of the petition was to stop the removal of trees on campus. Petition sponsor Jesse Freitas ’16 spoke before the Senate at its final general body meeting on Thursday, April 9. The Senate supported the petition, and Senator Jessica Krajewski ’16 was tasked with further investigation into the removal of trees throughout RPI’s campus. The Facilities and Services Committee will also look into concerns raised by the petition. A second petition to restore use of all doors in residence halls was also brought before the Senate by Harrison Leinweber ’18 during Thursday’s meeting.

Other petitions that have met the 250 signature threshold include “Bring Beer Back to GM Week” and “Do NOT Extend Sodexo’s Contract.” Both of these petitions, and any others that reach the threshold prior to the start of the next Senate, have been deferred to the 46th Student Senate, which will take office following the results of Thursday’s Grand Marshal Week elections. The RPI Petitions website can be found at http://petitions.rpiwtg.com